Outside Germany, together with "Wurst" (sausage), "Schnitzel" has become one of the most identified "classics" of German Food. It means "cutlet" in German and originated as we know it now in Austria, as "Wiener Schnitzel". Cutlet from Vienna; a thin breaded and fried cutlet made from veal.

This is now the only Schnitzel allowed to use that name. One described as "Wiener Art" means it was prepared like a Wiener Schnitzel, but is not veal.

There are many variations: breaded chicken cutlets, turkey cutlets, pork cutlets for example, and all with "Schnitzel" in their title, but of course as with most recipes "Schnitzel the breaded cutlet" has a story behind it.

The Roman Empire covered an enormous amount of territory that was hard to control and maintain, so to make it easier to rule in A.D. 395 this was split into two separate empires.

It is thought that the Byzantine Empire is the birthplace of the first Schnitzel. Created for Kaiser Basileios I, Emperor Basil I, who ruled between 867-886 AD, and liked his meat to be covered with sheets of gold leaf before it was cooked.

This became a popular meal with wealthy Byzantines, but it was expensive so an alternative coating was developed; "Yellow Gold". Lightly toasted bread crumbs.

The idea of coating meat with breadcrumbs before cooking spread to neighboring countries, and was already in use in Austria during the 19th century where in Vienna the recipe and technique were adapted to Austrian tastes.

Wiener Schnitzel, with its crisp coating and soft moist filling, had arrived. Large slices of finger-width thick veal, pounded until thin, dipped in flour, egg and breadcrumbs, then fried in butter or oil until golden brown.

It is easy to cook a perfect schnitzel at home, although these days is more often made from Turkey, Chicken Breast or Pork than Veal. There are "Schnitzel" from breaded fillets of Salmon, as well as vegetarian versions using Tofu (bean curd), and they are increasing in popularity.

All purpose flour
2 eggs
Bread crumbs (These can be seasoned with some freshly ground pepper, dried mustard, garlic powder, chili powder, salt, or finely grated parmesan but this is optional)
Salt and pepper
Garlic crushed
Vegetable oil and butter for frying (or the same quantity of clarified butter)

Wash the meat in cold water and pat dry on kitchen paper.

First butterfly chicken breasts if they are very thick. Cover meat with plastic wrap, or wax paper, and starting in the center and working outwards pound until it is around a 1/4 of an inch in thickness. Your little piece of meat could easily end up plate sized.

Trim the edges of the meat and make a few little "snips" along them. The wrap protects the meat and the small cuts help the schnitzel keep its shape.

Season the meat with salt and pepper and garlic to taste. A pork cutlet is given extra "zing" with more garlic, while a breaded chicken cutlet can be swamped by too much. 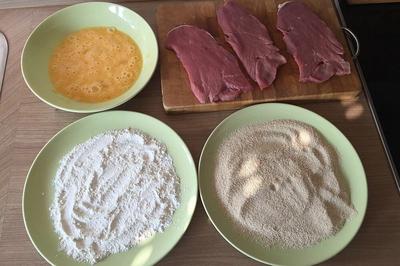 Take three shallow bowls or flat plates:
.....pour beaten eggs into one
.....flour into the second
.....bread crumbs into the third

Dip the cutlets into the flour, then into the beaten egg, removing any extra with your fingers, and finally into the breadcrumbs, making sure that they cover the entire escallop, and pressing firmly into the coating.

Place the breaded cutlets in a deep skillet with heated oil. 1.1/2 tablespoons oil for each.

Schnitzels need to float a little while cooking and depending upon their size, and the size of the pan, it might only be possible to cook two at a time. Keep cooked schnitzels warm in the oven.

It can take three or four minutes for the oil to reach the correct temperature. Bring to temperature on high heat, throw in a small piece of bread, if it sizzles it is hot enough but if it only foams then it needs a bit more time.

The key to good schnitzel is gauging how long it needs to cook, and to test that the meat is white, not pink, prick the middle of the cutlet with a sharp knife. It should be moist not dry, so try not to overcook it.

Remove from pan and drain on paper towel.

Serve your classic Chicken Schnitzel, Turkey Schnitzel, Pork or Veal Schnitzel with a wedge of Fresh Lemon, one of these sauces or toppings, some Spaetzle, French Fries, Fried or Boiled Potatoes, Rice, authentic German Warm and Cold Potato Salads are favorite accompaniments with Fresh Green or Mixed Salad, or Sauerkraut.

While as the filling in a Semmel, bread roll, it tops the popularity stakes.