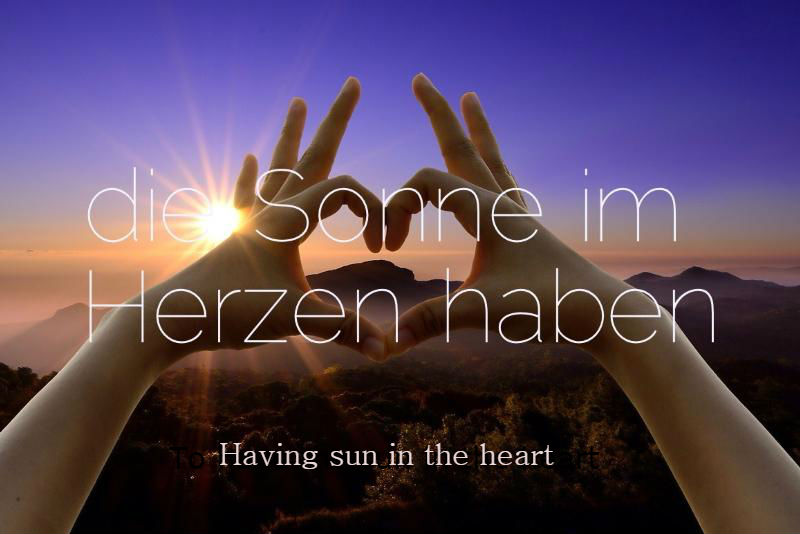 "Die Sonne im Herzen haben", literally "to have the sun in one’s heart", someone who is always happy, hopeful and optimistic.

And a German idiom you will hear almost every day in Germany describing one situation or another is "Alles ist im grünen Bereich".

Could be referring to anything from successfully filling the gas tank without maxing out the credit card, baking a cake or booking a flight to some sub-tropical island.

They may seem to be eccentric at times, but German idioms are used by native speakers to cover just about every situation, and heard in all social circles and circumstances. Not only in conversation, but throughout the media and literature.

As with all languages some German expressions can be meaningless, even bizarre, if taken word for word, but are used to represent something: a feeling, a description, almost anything.

As idioms make up a large part of everyday speech in Germany, they are sometimes confusing for anyone who has never heard them before and has no idea what they mean.

With their origins lying in its history, literature, religion and traditions, a country's colloquial expressions indicate a great deal about the community's way of thinking, so with Kein Aber - "No But" - No "ifs", "ands" or "buts", here to enjoy, and give you an insight into the German language and Germany's people, are some of the most common sayings used in everyday speech throughout the country.


Wenn der Kuchen spricht hat der Krümel ruhig zu sein - The crumble has to be quiet when the cake is talking - When grown ups are talking, children should listen/be quiet

Dumm wie Bohnenstroh sein - To be as dumb as a bundle of bean straw -To be as thick as two short planks, to be very stupid

Wo drueckt der Schuh? - Where does the shoe pinch = What troubles you?

And another favorite German phrase "aus einer Mücke einen Elefanten machen" - "to make an elephant out of a mosquito" - to make something seem much bigger/more important than it is.

Just a few of the many idioms you will come across in colloquial German, but perhaps not all of them in one day.


Hope you enjoy them and that they have given you some insights into Germany and Germans, and when you hear or want to use one you will then..."Eine zusätzliche Wurst haben" - "Have an extra sausage" - Have an advantage.

And will not have to think "Da bin ich überfragt" - "I have been over asked" - Hmmm, now there you have got me!


You Should Also Read:
German and Mark Twain
Albert Einstein and his Quotations
Denglish, German - English Mix, A War of Words