Long before winter is a distant memory, the over one and a half million "garden colonies" on the outskirts of German cities begin to hum with activity, which, as these are often in the shadow of train tracks, can be admired by passengers on their way to everywhere from Hamburg in the north to Bavaria in the south.

Germans love their gardens, even if they are only containers on a balcony, but Schrebergarten, those little rented plots on the edge of cities, alongside rivers or sometimes a small paradise in the middle of a city, are the pride and joy of millions of city-dwellers.

Also known as a Kleingarten, small gardens, they might look less like oasis of nature and more like housing developments in miniature, with their clipped lawns, trimmed bushes, and well tended flower and vegetable 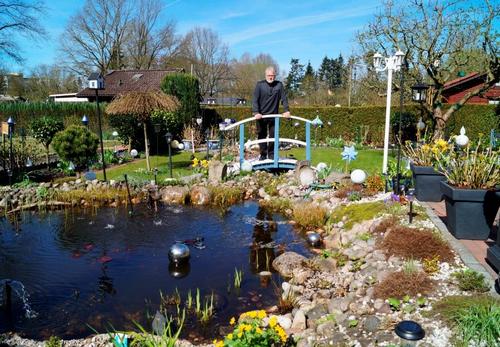 beds, but at the first sign of a disappearing winter they are packed with families getting their plot ready for the sunshine months.

Not that these gardening clubs are only the province of families and the elderly, young people are also forsaking lazy, or hedonistic weekends, and putting their names down on waiting lists to have a private allotment of their own.

But it can be a long wait, four to ten years in some cities, as many of them have been in families for generations, from the times when city dwellers needed their allotments, because if you didn't grow your own vegetables you didn't have any.

The idea of making small plots of land available for the people to use and enjoy isn't a new one. In 1806 Landgraf Carl von Hessen, a German prince, had ordered they be supplied to enable the poor to grow food, and this idea was copied by other land and factory owners, as well as welfare organizations.

Dr. Daniel Gottlieb Moritz Schreber in 19th century Leipzig, Saxony, expanded the idea to create "green" spaces for children. His son-in-law began the Schreberverein, Schreber Organization, in 1864, following the death of Schreber in 1861, and the gardens have carried his name since then.

Although it was a school director, Ernst Innozenz Hauschild, who worked together with a group of parents to develop the idea into one where worker's children could both learn and play, and the first Schreberplatzes were opened in Johannapark, Leipzig, in 1865.

Fields were planted with vegetables and these were also used to teach children, who would not have had the opportunity otherwise, about gardening and how food was produced.

The idea quickly took off and grew from somewhere just for children to include entire families, and the areas began to be known as Schrebergarten.

This is Germany, so now there is a nine page book of rules set by the German government in 1983. "The Federal Small Garden Law", or Budeskeleingartengesetz, must be followed by all "Schreber-gardeners", allotment or small garden holders.

The rules cover everything from the individual gardening colony's strict governing committee and size of the plot, to the size and shape ofany building erected. Although any building old enough to be considered a "Denkmalschutz", historic or a monument, is allowed break the regulations.

There is a "30-30-30" rule where no more than 30 percent of a garden can be used for recreation, at least 30 per cent must be used for fruit or vegetables, and 30 percent can have some type of building. While even the most enthusiastic gardener must down tools between midday and 3 pm as anything producing noise can only be used before or after that time, otherwise there will be trouble.

And the leaders of the collectives often add their own conditions, even to stipulating what types of plants are allowed.

However as a "Green" country, gardening with an emphasis on nature, conservation, environmental protection, "organic produce", and even "Lunar Gardening" is followed by choice.

There are no rules covering what should and should not be used or done, nevertheless almost 100 percent of small gardeners make and use their own compost; 97 percent collect and use rainwater for watering; over half grow completely organic fruit and vegetables, and very few will use either chemical fertilizers or insect repellents.

The garden lawns are immaculate, flower beds weed free, fruit trees trimmed precisely to the allowed height and garden furniture perfectly placed, while at the same time it is hard to miss the garden gnomes, water features, children's garden toys and even miniature railways, among many of the spinach and bean plants.

The long waiting lists are a sign of the times in Germany, a combination of the wish to get back to nature with the satisfaction and simple pleasure of "growing your own", producing something that can not only be seen but also enjoyed. From fruit trees and berries to beet and chard, experiments with the exotic and hard to find, or simply trying out new techniques for the fun of it.

close together to provide nutrients and protection to each other, such as squash, corn, and beans, and although the "gardener" might not want to eat all of these there is a thriving bartering system in place so whatever is not needed can easily be exchanged.

As soon as winter is over these small patches of urban greenery not only become a hive of activity and a center for socializing, but often serve as a city's lungs and help with the conservation of nature.

Attracting all types of wildlife, and giving wildflowers active encouragement to thrive.

World War I and World War II emphasized the importance of these gardens in providing some necessary fruit and vegetables for urban dwellers, while, as so many homes were no longer standing at the end of WWII, small buildings were erected on the plots to provide shelter for otherwise homeless families. For generations Schrebergarten have been Germany's urban green oases, and in today's world they are more popular than ever.