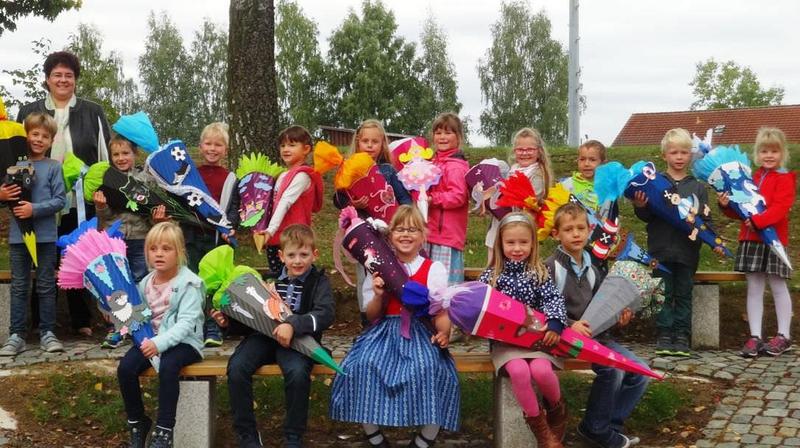 For Germany's first graders the first day of school is a real milestone in their lives. Not only because now they belong to the group of "Big Ones" but alongside a new school bag, pencil case and books, they also receive

the most exciting thing possible for a 6 year old. A colorful, goodie filled, Schultüte. A German School Cone or Candy Cone.

Also known as Zuckertüten, "Sugar Bags" as they were originally filled with candy, Schultüten are often made as a kids craft project in class during their last term of Kindergarten, others are a "labor of love" produced by their parents, or sometimes Godparents.

School holidays in Germany are staggered so there are states where first graders receive their much anticipated school cone, filled with all the treats to be unpacked after their very first class, at the beginning of August. While others, for example in Baden Württemberg and Bavaria, have to wait until mid-September.

You don't have to be a handcraft expert to produce spectacular Schultüte, which literally translates as "School Bag", because it is also a craft project for children under six years old, and here is a step by step "How To".


How to make a School Cone, or as it is known in Germany: "Schultüte Basteln".

Cut a quarter circle out of a heavy card stock, say 32 inches square that would give a 10 inch opening; but the size is up to you.

As a rough guide the Schultüte should reach from the first grader's chin to just over the knee, then it will not be too heavy or difficult to carry, but most kids would rather "the larger the better".

It is easy to tie a pencil to a piece of string the same length as the height you want your cone, and use that as a compass.

Add heavy duty double stick tape to one side. Roll the quarter circle into a cone shape, peel off the tape's protective paper and press down firmly. To make the Schultüte even more stable add another layer of clear sticky tape to the cone covering both the inside and outside of the join.

This will serve as a base, so strengthen the pointed end with a few layers of sticky tape for about two inches as this area is quite weak and will bend easily.

On the inside of the cone add two thin lines of glue. One about two inches down and one near the edge, then attach a collar of tissue paper, crepe paper, felt, netting or fine fabric, to fit the circumference of the cone but of any length you choose.

There should be about three inches of "collar" inside the cone, with a one inch overhang after the second layer of glue. Carefully stick down all around both of the glue lines.

This "collar" will be tied with ribbon to keep the contents safe when filled, so a really long one looks great.

Repeat this process just on the top edge of the outside of the cone with whatever trimming you have chosen, but it should be two inches shorter than the inside layer. Stick down.

This will cover the reinforced pointed end as well as where the second layer of the collar has been added.

Push a little paper down into the point, about 1.1/2 inches, making sure that it really won't bend.


Now it is time to add your decorative layer.

This can be pre-printed gift wrapping or metallic colored foil paper for example.

You can use a thin fabric, featuring the first grader's favorite motive as both the cover and collar.

Or a basic colored paper that can be decorated to suit the lucky recipients individual tastes: sports, hobbies, wishes or fantasies, with motifs, shapes, pictures, small toys or other gifts. You can let your imagination run wild, in fact anything that would make his or her "dream" kinder cone for that first day of school. A "Lucky Toadstool" perhaps?

Just make sure whatever decorations you choose are securely attached so they won't fall off in all the excitement that is going to surround it.

The Schultüte is ready and only needs filling with colored crayons or other fun accessories for the important first school year, small games, books, toys, a sandwich box, drink container, or sports shoe bag featuring favorite characters, and a few "Suessigkeiten", candies such as Gummi Bears or cookies.

A German School Cone is an elementary school tradition and that first day of school would be unthinkable without one. It will take pride of place for years to come, even when the "first grader" hits High School then, with the help of a special hook and "tea lights", they are used as hanging lanterns.


A Schultüte is a joy to make, fun to receive, and the memories last forever.