When the Romans swept over the Alps and through Europe they brought many things with them, from the idea of public heated baths, sanitation and the calendar, to grapes, asparagus and chestnuts, so during the fall and

winter months chestnuts are plentiful and found throughout Germany. Even more especially in an area which at one time was a permanent Roman settlement, or where they had planted vineyards.

Cologne, "Kolonia", was the capital of the Roman province "Germania Inferior" on the west bank of the Rhine river.

A "food foraging" favorite for generations, long before frugal living became a trend, although they were also known as "das Brot der Armen" - bread of the poor, chestnuts are often an important ingredient in local specialties. Such as Koelner Martinsgans, Cologne St. Martin's Goose.

Chestnuts are a popular street food roasted and served in small paper bags on chill evenings, Kastanien Konfitur, Chestnut Jam, is seen in many homes, and they are the main ingredient in all types of warming seasonal soups, ranging from simple to exotic.

This is an easy recipe for a CREAMY CHESTNUT SOUP, and typical traditional German Hausmanskost, "home cooking", although as it has both wine and cream perhaps it's not really frugal food. 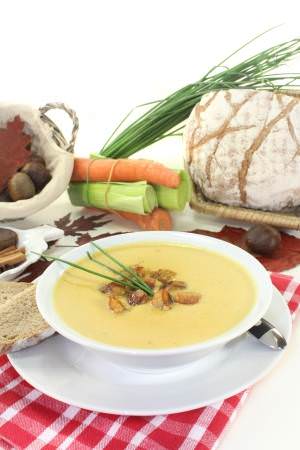 Melt the butter until it begins to bubble, add the chestnuts and sprinkle with a little confectioner's sugar. Stirring allow to become lightly caramelized.

Add the prepared vegetables, and bay leaf, season with Salt, Pepper and a little pinch each of the Cinnamon and Nutmeg if using.

Cook over a moderately high heat until the wine has reduced to about two-thirds.

Cook over a low heat until all vegetables are soft. Between 15 to 20 minutes.

Remove bay leaf.
With a blender puree the soup in batches, leaving one batch whole.

Return to a saucepan, stir to mix and over a low heat bring back to temperature 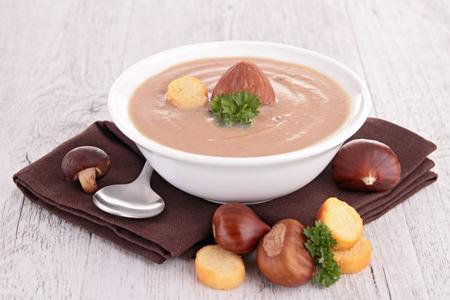 Taste and reseason if necessary.


Creamy Chestnut Soup is often served with small fried bread croutons, and/or chopped fried bacon, and decorated with a sprig of green herb. Chives, rosemary or thyme for example.

And it tastes as good as it looks.

Some tips for the preparation of Chestnuts which will apply to virtually anything you make with them:

Always collect, or buy, more than you need. As you peel them you will normally have to throw away around 10 to 15 percent, and additional ones will probably have to be discarded after boiling.

To remove outer shell, work down towards the base after inserting the point of a small knife under the skin at the top of the nut, being careful not to cut the inner skin. It should be possible then to easily remove the base. This is the longest part of the whole procedure, which is why many people buy peeled chestnuts in vacuum packs.

To remove the inner skin and soften the nut, add to a saucepan of water with the zest of a lemon, cover them with water and bring to boiling point, then simmer for about an hour until they are soft.

Use a slotted spoon the remove a small quantity at a time, and remove the inner skin by snapping the nuts in half. The skin then comes away easily, but the nuts do have to remain warm otherwise they become difficult to peel. Any nuts which have remained hard after being boiled are bad, they are normally also darker, and must be thrown away.