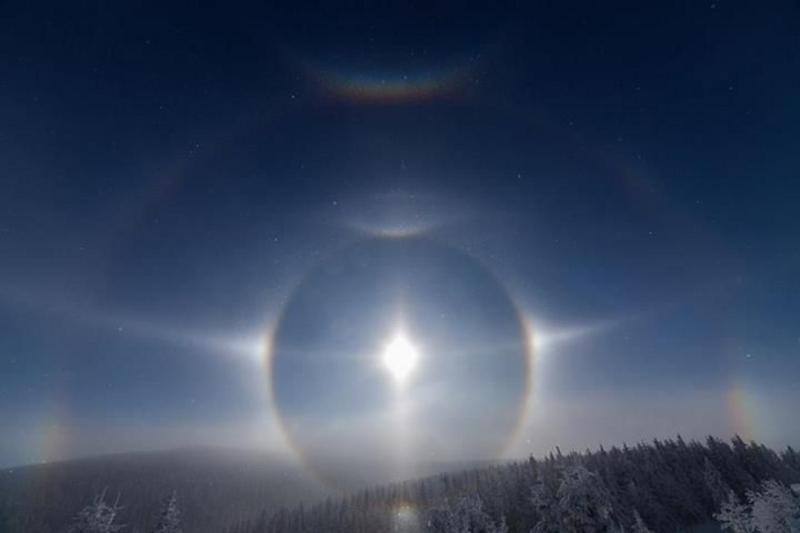 Caroline Lucretia Herschel born March 16, 1750 in Hannover, the Electorate of Hannover, became a German-British astronomer. The sister of Friedrich Wilhelm Herschel, who discovered the planet Uranus, she was a pioneer in her own right: cataloging stars and nebula, becoming the first woman to discover a comet, making major contributions to their study, and compiling astronomical catalogs.Two of which are still in use today.

The fifth of six surviving children from ten born to Isaac Herschel and his wife Anna Ilse Moritzen, Caroline's childhood was marked by illness, smallpox when she was three left her cheeks scar pocked and her left eye slightly disfigured, while typhus seven years later led to her growth being stunted and she remained a tiny 4 feet 3 inches.

Her mother was against girls receiving an education, considering it a waste and that learning how to complete various household chores were all the skills necessary, so as her brothers left, and because of her disfigurements she was not expected to marry as her elder sister had, Caroline's life became that of a housemaid for her mother and the brother who remained at home.

Her father, a musician who had wanted his children to study French, mathematics and music, had tried his best to insure they all, also "Karoline" as far as possible, received some education, which included cold nights of 'star watching', but he had died in 1767.

Against the wishes of her mother, although she agreed after being bribed with the prospect of having servants wages paid for her, in 1772 Caroline's twelve year older brother William Herschel took her from Hanover to live with him in England.

He had moved to Bath in 1757 where the musician by profession was an astronomer by passion.

William gave Caroline voice lessons as well as teaching her English and advancing her study of mathematics, but despite her skills as a mathematician she never learned her multiplication tables, and although a well known soprano who sang solo professionally when her brother was conducting, she turned down all other invitations. Among her favorite performances was as premier soloist in Handel’s Messiah.

In 1782 the year after her brother had discovered Uranus, on March 13, 1781 having followed it for weeks believing it to be a comet, he was appointed astronomer to King George III and granted a royal pension, so they moved from Bath to Datchet. This was nearer to the royal court at Windsor Castle, where he was expected to be 'on call'. Caroline continued to work with him, assisting him in all aspects of building increasingly powerful telescopes, making complicated calculations from his observations and keeping a record of them, while also beginning to make her own independently.

In 1783 she discovered three new nebulae, faint clouds where stars

form, and August 1, 1786, her first comet. Also the first discovery of a comet made by a woman.

It was rare even for men to be paid for their services to science at the time, but Caroline became the first woman officially recognized for a scientific position when, in 1787, King George III gave her a salary of £50 per year to continue as an assistant to William.

Between 1786 and 1797 Caroline discovered eight comets, revised the recognized catalog of the stars of the time, which had been produced by John Flamsteed, an English astronomer and the first Astronomer Royal; cross-referencing, correcting and adding 560 stars which had been omitted.

Caroline returned to Hanover in an almost instantaneous reaction following her brother's death, a decision it is said she later regretted, and there re-organized both his and her catalogs of discoveries and observations.

Having always been an influence and support to her nephew, William's son John Herschel, as an independent researcher she now produced a catalog of 2,500 nebulae to assist him with his astronomical works.

Now a celebrity in the world of science and many scientists came to visit her in Hanover, socially but also to seek her advice and knowledge,

while on her ninety sixth birthday she was awarded the King of Prussia's Gold Medal of Science for her life long achievements.

There is a crater on the moon as well as an asteroid named after her.

Her obituary was another type of award for a woman who had begun life with the odds stacked against her:

"Her memory will live on its own merits, even though the time should come when the astronomical celebrity of a woman will not be sufficient to excite the slightest remark."

German born Astronomer Caroline Herschel died in Hanover, Kingdom of Hannover, January 9, 1848, aged 98, and at her request was buried with a lock of her brother's hair and an old almanac that had belonged to her father, while on her tombstone were to be engraved the words:

Der Blick der Verklaerten war hienieden dem gestirnten Himmel zugewandt.
"The eyes of her who is glorified here below turned to the starry heavens."

Images: 1. Sir William Herschel and Caroline Herschel, a colored lithograph by A. Diethe. Courtesy of The Wellcome Library London, Iconographic Collection, Library reference no.:ICV No 2926.
2. NGC 7380, an open cluster discovered by Caroline Herschel in 1787. Caroline Herschel discovered this cluster while her brother was absent, however, as was usual, William Herschel included his sister's discovery in his own catalog and labeled it H VIII.77. NGC 7380 is intertwined with a bright diffuse nebula with the catalog designation Sh2-142.
3. Oil portrait of Caroline Letitia Herschel, aged 79, by M. F. Tieleman, Public Domain


You Should Also Read:
Germany's Prehistoric Solar Observatory, Goseck
Summer Solstice and Midsummer
Gardening by the Moon in Germany