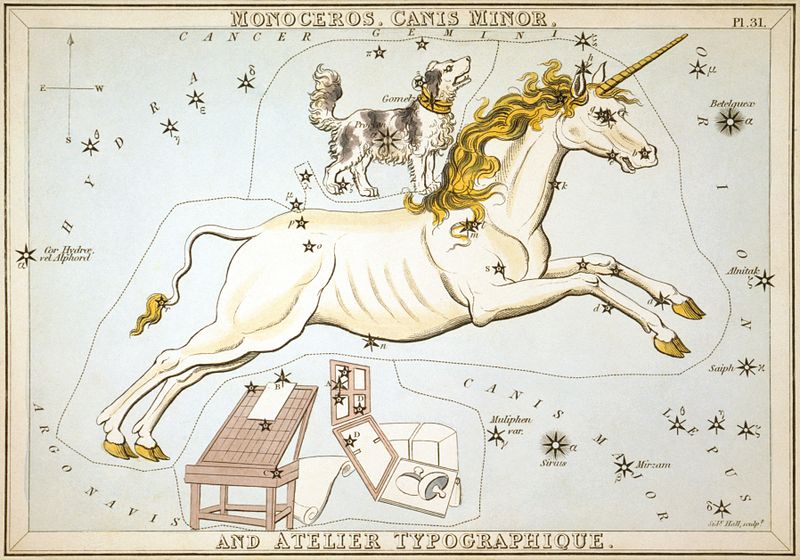 Imagine a unicorn with a rippling mane and swaying tail galloping across the sky. This would be the unicorn constellation Monoceros, and it does need imagination. The star pattern doesn't look anything like a unicorn, and it's such a faint constellation, you wouldn't notice it anyway. However, it does have a number of interesting features, and we'll have a look at some of them.

Monoceros [pronounced: mun-AW-suh-rus] isn't a classical constellation, so although a unicorn sounds exotic, there aren't any myths or legends about it. It was invented by Petrus Plancius (1552 – 1622), a Dutch astronomer and cartographer. He devised a number of constellations to fill in the parts of the sky which weren't covered by classical astronomy. This is why Monoceros is faint. Any bright stars would already be part of a traditional constellation. Monoceros's brightest star is only fourth magnitude. (The bigger the magnitude number, the dimmer the star. A sixth magnitude star is at the limit of what you can see without binoculars.)

If you wonder where the unicorn is hiding, it's in the space bordered by Canis Major, Orion, Gemini and Hydra.

Stars and planets
The stars of Monoceros aren't all intrinsically dim, but the brightest ones are very far away. For example, 13 Monocerotis is a dim fourth magnitude – almost fifth magnitude – star to us. In fact, it's a white supergiant over ten thousand times brighter than our Sun, but 1500 light years away.

William Herschel (1738-1822) was impressed by Beta Monocerotis. He called the star “one of the most beautiful sights in the heavens.” It looks like one star, but through a telescope, you can see that it's a triple star in a narrow triangular formation.

Stars are rarely named after individuals, but Plaskett's Star was named for Canadian astronomer John Stanley Plaskett (1865-1941) when he discovered that it was a binary system. And not just any binary, but one of the most massive binaries known. Its combined mass is around one hundred times the Sun's mass. The system is made up of two blue supergiants orbiting each other so closely that only special instruments can show its binary nature. They're 6600 light years away and well over a hundred thousand times more luminous than the Sun.

Possibly the most amazing star in the constellation is V838 Monocerotis. It's twenty thousand light years away, and no one had ever noticed it before 2002. But in January of that year, it was a real attention-grabber. It suddenly flared dramatically, increasing its brightness by ten thousand times in one day. For a while it was one of the brightest stars in the Galaxy. At first, everyone thought it was a nova, but astronomers generally agree that it isn't. However they're still debating what it might be.

In May 2019, there were sixteen stars in Monoceros with known planets. Most of the planets are giants orbiting close to their stars. An exception is the planet CoRoT-7b, a superearth. There isn't a precise definition for “superearth”, but it's a planet more massive than Earth, yet a lot less massive than Uranus. CoRoT-7b may be a rocky planet, but there isn't enough data to say. We do know that it wouldn't ever be home to humans. It's so close to its star that it takes less than one Earth day to orbit. The star CoRoT-7 has a second planet that is probably a hot Uranus.

Deep Sky Objects
Monoceros contains one of the sky's most beautiful nebulae, the Rosette Nebula (image by Adam Block and Tim Puckett). It's an emission nebula whose red color comes from the light emitted by energized hydrogen.

The Red Rectangle Nebula (image: Hubble Space Telescope) is a cubist contrast to the elegant Rosette. We don't know of anything else like it. There's a close binary at the center of the nebula, and astronomers think that eventually it will become a planetary nebula. They're still working on a convincing explanation for the shape and colors of the nebula as it is now.

Like the Hubble Space Telescope, Hubble's Variable Nebula was named for Edwin Hubble (1889-1953). William Herschel discovered the nebula, but Hubble studied it and realized that its appearance changed over time. The nebula's variability seems to be due to R Monocerotis, the bright young star that is embedded in it. As opaque dust clouds move past the star, they cast shadows.

Monoceros has only one Messier object: M50, an open star cluster with about a hundred bright stars. Surprisingly, Messier missed another cluster in Monoceros, even though NGC 2264 can be seen with the unaided eye in good conditions. William Herschel certainly didn't overlook it. On his first viewing, he described the stars, but later also noted some nebulosity.

You Should Also Read:
Nebulae
Starbirth
Constellation or Asterism & Other Posers