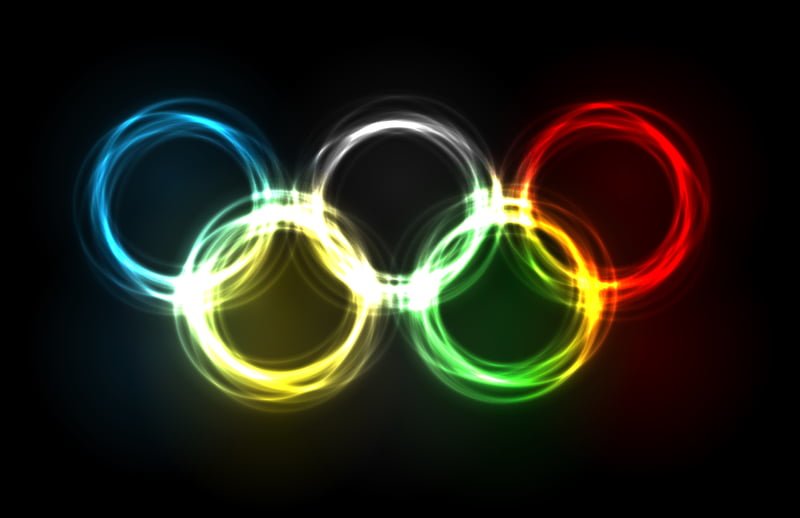 Welcome to the Galactic Winter Games, a starry tribute to Earth's quadrennial Winter Olympic Games. It's a tour of some really cool cosmic sights – as well as some hot ones.

The five Olympic rings symbolize the five inhabited regions of Earth. Here are five of the beautiful rings we might see in the sky.

Let's start with something close to home. This ring around the Moon, also called a lunar halo was photographed by M. Rasid Tugral. It's caused by ice crystals in our upper atmosphere refracting (bending) moonlight. The crystals focus the light into the ring shape. (If you look closely, you can find Jupiter near the Moon at the eleven o'clock position.)

The Moon and the Sun are both involved in the second ring, which is an annular eclipse. The Moon happens to be at the right distance from Earth to cover the Sun in total eclipses. But its orbit isn't circular, and occasionally an eclipse occurs when the Moon is at its most distant from us. This means that the Moon doesn't quite cover the Sun, leaving a “ring of fire” around the outside.

The Ring Nebula (Messier 57) is a planetary nebula over 2000 light years away in the constellation Lyra. It's not a ring around a planet. The gas that makes up a planetary nebula comes from a dying sun-like star shedding its outer layers.

In 1987 supernova SN 1987A occurred in the Large Magellanic Cloud (LMC), a satellite galaxy of the Milky Way. It was an enormous explosion – brighter than a whole galaxy – created by the collapse of a massive star running out of fuel. The large rings in this picture of SN 1987A were present before the explosion, but become noticeable when reflecting light from the supernova. In the middle of the center ring is the remnant of the star.

Our final ring is a ring galaxy. It's known as Hoag's Object after its discoverer, American astronomer Arthur Allen Hoag. There's a ring of young blue stars and a core of older yellow stars, with a noticeable gap between them. If you look carefully in the gap, you can see another ring galaxy in the distance. This is surprising, since this type of galaxy is quite rare. [Image: Hubble Space Telescope]

Skating
We used to accept that water was scarce in the Solar System, but there's now evidence of it almost everywhere. Since most of the Solar System is pretty cold, it's likely to be in the form of ice.

The ice-covered surface of Jupiter's moon Europa is one of the smoothest in the Solar System. Definitely the venue of choice for figure skating, speed skating, ice hockey and curling. Europa was one of four moons discovered by Galileo in 1610 while he was observing Jupiter with one of the earliest astronomical telescopes. Through a small telescope the moons are just little dots, but in pictures from space probes, Europa looks to me as though giants have already been skating on it.

Skiing
There is a Skiing Cluster (NGC 457) in the constellation Cassiopeia, according to Wikipedia. It's an open star cluster discovered by William Herschel in 1787. Other common nicknames for it are the Owl Cluster or ET Cluster. Two very bright stars stand out from the other cluster stars, looking like large eyes. (I can't actually see why it reminded anyone of skiing.)

The Blue Snowball nebula (NGC 7662) in Andromeda wouldn't provide snow of any color for a cosmic skier. Even though it's nearly five trillion miles across, like the Ring Nebula it's a planetary nebula. Neither is the Snowman nebula (SH2-302) made of snow. It's a small emission nebula in the southern constellation Puppis. It glows red because hydrogen gas, energized by the intense radiation of a hot young star, emits red light.

So where will the skiing, bobsleigh and biathlon take place? Does Europa also have snow? No, but apparently Saturn's moon Enceladus does. There are numerous cold geysers that spray out icy particles, some of which go to form one of Saturn's rings. However most of them fall back to the surface as a very fine powder snow. One planetary scientist described them as perfect for skiing. Enceladus also has a varied terrain that includes both flat areas and ridges.

It came from outer space
Some of the gold medals for the 2014 Olympics in Sochi, Russia had a unique feature. On February 15, 2013 a small asteroid exploded over Chelyabinsk in Russia. The shock wave did considerable damage to buildings and many people needed medical treatment. Bits of some of the meteorite fragments were incorporated into special medals for winners of events held on February 15, 2014. The International Olympic Committee didn't allow these medals to be awarded until the games were over.