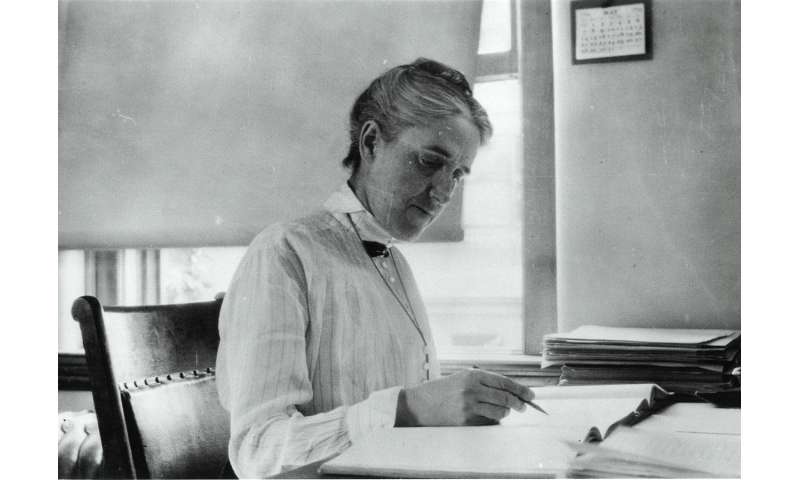 One of the outstanding astronomers of the early twentieth century was Henrietta Leavitt (1868 - 1921). After she was employed by Harvard College Observatory in 1902, she made significant contributions to astronomy, despite ill health, deafness and the major handicap of being a woman.

Several years ago I wrote about Leavitt's work for a course I was doing. She had discovered a direct relationship between the actual brightness of a Cepheid variable star and the period over which its brightness varies. Knowing both the actual and apparent brightness of an object could tell you how far away it is, so this was a breakthrough in measuring astronomical distance. The textbooks always called the relationship the period-luminosity relation, erasing Leavitt as its discoverer. In addition, the biographical information I found was sketchy and contradictory.

It was about time someone wrote a biography of this remarkable woman, and it looked as though science writer George Johnson had done it with Miss Leavitt's Stars. But as the title implies, he concentrated on the Cepheids themselves and the developments that grew out of Leavitt's discovery. That was actually his original intention. Yet he was intrigued by the astronomer herself and set about researching her life. The subtitle The Untold Story of the Woman Who Discovered How to Measure the Universe seems to suggest that the story is now told.

In fact, the subtitle is literal: the story remains untold. Johnson's is a short book and less than a quarter of it deals with Leavitt's life, though not for want of trying. Leavitt was unmarried and childless. She wrote no personal memoirs, left no diary. (A notebook covering a four-year period was strictly about work.) The limited surviving correspondence written by her, to her, or about her, was professional. Johnson searched census data, probate court records and the archives of Oberlin, Harvard and Radcliffe colleges for material.

The only memoir is the obituary written by Harvard astronomer Solon I. Bailey. He described Leavitt as serious, devoted to her family, considerate, principled and good-natured, and characterized her as “of an especially quiet and retiring nature, and absorbed in her work to an unusual degree.”

Leavitt devised the standard for measuring the magnitudes of stars from photographic plates, which was called the Harvard Standard, later adopted as the international standard. She was a member of an International Astronomical Union (IAU) commission. The IAU's first general assembly took place after her death and it recognized her “great service to astronomy.” The North Polar Sequence, which detailed how she had devised the standard, was her major work, but there were also many shorter papers.

The main story in Miss Leavitt's Stars was how Leavitt's discovery became a working tool for determining cosmic distance. It's an interesting and readable account that explains the problem of measuring distances in space and what is now called the “cosmic distance ladder”.

In the early 1920s astronomers differed about the size and nature of the Universe. It's hard to believe now that most astronomers then accepted the Milky Way as the whole Universe, and thought distant nebulous objects were structures within our Galaxy. It was a radical idea that the nebulae were other galaxies.

Johnson tells us about some of the major characters in the debate. For example, Harlow Shapley used Leavitt's work as the basis for estimating the size of the Galaxy. He ended up with a figure of 300,000 light years, which was a good attempt, though way too big. But for Edwin Hubble, Leavitt's discovery was the trump card in the game. Hubble was using the 100-inch Mt Wilson telescope to study the “Andromeda Nebula” when he realized that he had found a Cepheid there. He used its period to calculate its distance at one million light years. This was less than half the modern figure, but clearly well outside Shapley's Milky Way.

I enjoyed seeing the way the scientific understanding grew, as well as “meeting” the personalities involved. It's a good reminder that science is a human pursuit, sometimes hampered by human failings. Yet since Miss Leavitt's stars, the Cepheids, are the stars of the show, a brief explanation about why they pulsate would have rounded out this lively account.

The book underlines the contrast between the solidity of Leavitt's professional life, short as it was, and the way there is “something almost ghostlike in the scant traces Leavitt left in the public record.” Johnson concludes, “It is the discovery not the discoverer that matters. Miss Leavitt . . . seemed to be content to be part of a greater thing called science.”

I'm not so sure. Even if Henrietta Leavitt thought that her work was more important than herself, she would surely have preferred to concentrate on her variable stars than the Harvard Standard. And it seems a bit sad that she left so little personal trace that she's not even the star of her own biography.

George Johnson, Miss Leavitt's Stars: The Untold Story of the Woman Who Discovered How to Measure the Universe, W.W. Norton & Co., 2006

Note: I bought a copy of Miss Leavitt's Starswith my own funds.