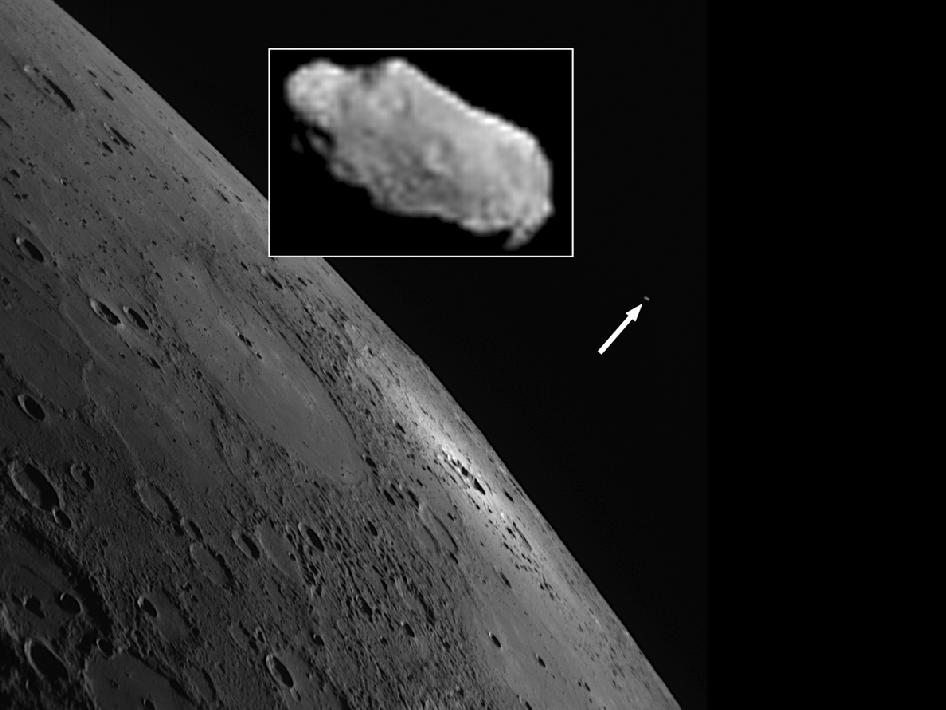 Discovery image of a moon for Mercury?

Watch out for jokes and hoaxes on April first. It's a tradition that goes back centuries in much of Europe, North America, and other places that share their customs. Stories abound about how April 1 became a day of foolery, but without any good evidence. One persuasive explanation from a college professor in Boston, Massacusetts was itself an April Fool joke. Here are a few astronomy and space April Fools.

Astronomy Picture of the Day
Astronomy Picture of the Day (APOD) doesn't do pranks, but likes to make little jokes on April 1, usually re-captioning existing images. For example, on April 1, 2003 it reported that a new constellation was surprising star gazers. “The constellation of Ollie the Owl has suddenly started dominating the southern hemisphere.” The picture showed a bird perching on the Tololo All Sky Camera, and APOD admitted that it would have been funnier if the bird hadn't scratched the plastic dome.

However, on March 31, 2005, APOD said the next day's picture would be “water on Mars . . .” which did leave people wondering. This was before orbiters and rovers had gathered considerable evidence of water on the red planet. The April 1 picture was of a glass of water on top of a Mars candy bar.

Mercury's moon
On March 31, 2012 NASA provided the “discovery image” of a moon for Mercury, as captured by the MESSENGER spacecraft. Even on the eve of April 1, this was credible – after all, spacecraft often discover moons. But like many good April Fools, there are clues.

Firstly, the enlarged picture of the moon is immediately recognizable to many astronomy buffs. It's a well-known image of asteroid 243 Ida, taken by the Galileo spacecraft on its way to Jupiter.

Secondly, they outlined a plan to collide MESSENGER with the moon to knock it free of Mercury's gravity and “set it on an Earth-crossing trajectory suitable for recovery as a Mercury meteorite.” In fact, they'd do this with such precision that the moon would arrive at a remote location in Antarctica, avoiding population centers. Whew! Pretty impressive planning for something that had only been discovered the day before!

And finally, there's a mission proposal in the planning stage for X-ray analysis of Mercury's surface – it includes the Greek name for Mercury: Hermes. It's name: Hermean On-surface Analysis with X-rays. (Its acronym?)

Spacewalking
Three astronauts on board the International Space Station got a laugh out of Mission Control with a doctored photo of themselves looking into the space station from outside – not wearing space suits, but slacks, T-shirts and sunglasses. (Hope they remembered their sunblock!)

The Jovian-Plutonian Gravitational Effect
The online Museum of Hoaxes lists Patrick Moore's April Fool as one of the 100 Best Hoaxes. The popular British astronomer, with the help of BBC radio, explained the Jovian-Plutonian Gravitational Effect to listeners on April 1, 1976. He said that at 9:47 a.m., a rare conjunction of Jupiter and Pluto would partially negate Earth's gravity and that if you jumped at that time, you would get a floating feeling.

A number of people later phoned the BBC to describe their experiences of floating. I don't know if they were serious or were joining in on the joke.

There was a serious point to Moore's joke. Jupiter is massive, but it's far away from us. Our Moon has more of a gravitational effect on Earth than Jupiter does. As for Pluto, it's smaller than the Moon and about six times as far away from us as Jupiter. Moore was ridiculing a popular book that predicted the dire consequences of a rare planetary alignment that would happen in 1982. All of the planets would be on the same side of the Sun as the Earth and the tidal effects would create massive earthquakes. In particular, Los Angeles would be destroyed.

Without detailing the reasons why this wouldn't happen, I'll just say that you probably realize Los Angeles is still there.

Virgin Pluto
On April 1, 2011 Richard Branson announced that he had bought Pluto and had a plan to get it reinstated as a planet. Virgin Galactic would construct a space vehicle to drag asteroids and assorted space debris to the dwarf planet until it was big enough to qualify as a planet. Branson said, “Virgin has expanded into many territories over the years, but we have never had our own planet before. This could pave the way for a new age in space tourism.”

Hmm. It would probably need longer than the five years Branson projected! NASA's New Horizons spacecraft took over nine and a half years to get to Pluto. And that's without any asteroids in tow. There is also the matter of developing a suitable vehicle – it was only in December 2018 that Virgin Galactic finally got its first spaceplane to the edge of space.

Really?
I'll end with a story that wasn't a hoax. On March 30, 2012 NASA announced that asteroid 2012 EG5 would come close to Earth on April 1. But there was no chance of its hitting Earth. I wonder if they felt a bit defensive about it when they put out the press release. You can imagine their wanting to add: “No, really, there is an asteroid.”

You Should Also Read:
Gravity - Cosmic Glue
Mercury Facts for Kids
Could You Survive Unprotected in Space?