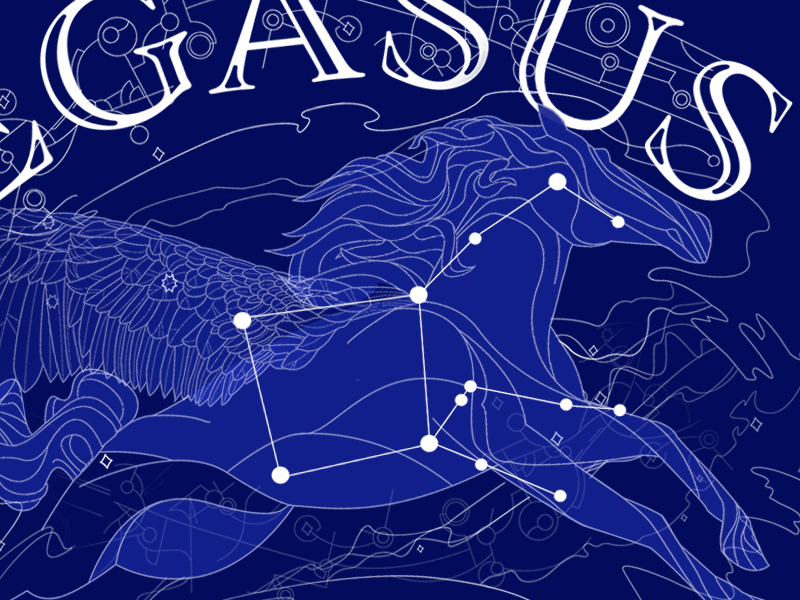 Every morning Phoebus Apollo harnesses his four horses to the chariot of the Sun. He drives the chariot into the sky, bringing daytime to the Earth. When he drives it back down, night falls. Horses have been features of the heavens from the time of the ancient Greeks up to the present day.

Pegasus and Equuleus, and Auriga
The most famous cosmic equine is probably the winged horse Pegasus. In Greek mythology he was born of the Gorgon Medusa when Perseus cut off her head. Pegasus was later tamed by the hero Bellerophon. The constellation is often mistakenly included as part of the constellation group that illustrates the story of Perseus and Andromeda, a occupying a large portion of the northern sky.

Pegasus contains a prominent marker for stargazers, the asterism known as the Great Square of Pegasus. Another of its notable components is the very first planet discovered orbiting a sunlike star. It was designated 51 Pegasi b, but unofficially known as Bellerophon. With a fine disregard for the classics, it's now officially named Dimidium, meaning half. (It has half the mass of Jupiter.)

Peeking out from behind the head of Pegasus is a constellation most people have never heard of: Equuleus, the colt. It's not surprising that it's so little known, because it's small and dim. Even its brightest star is only of the fourth magnitude. (The higher the magnitude number, the dimmer the star appears.)

Yet Equuleus is an old constellation. Ptolemy (c. 90-168 AD) included it in the Almagest. It may have been invented by Hipparchus (c. 190-120 BC) or Ptolemy himself. There are a number of different legends which relate to Equuleus, including traditions that associate the colt with Celeris, who was either the brother or the offspring of Pegasus.

And you might expect Auriga the charioteer to have a horse. Auriga is often identified with Erichthonius who was known as a great horse trainer. He was the first – excepting Apollo himself – to drive a chariot pulled by four horses. Although Auriga is depicted with reins in one hand, the only animals he has are a she-goat and two kids. This is probably a remnant of a pre-Greek tradition in which stars of Auriga represented a herd of goats.

Centaurus and Sagittarius
There are two constellations that depict centaurs, creatures half human and half horse. One of them is called Centaurus, so that's obviously a centaur. It's a prominent southern hemisphere constellation, and its bright star Alpha Centauri (Rigil Kentaurus) is the nearest star system to our Solar System. Although it looks like a single star, it's actually a triple star system, and at least one planet orbits Alpha Centauri B.

Mythology usually presents the centaurs as violent, lecherous louts. A rare exception was Chiron who's associated with the constellation Centaurus. It seems improbable that the centaurs were so popular that they would have two constellations. Nonetheless a second constellation is also represented as a centaur, Sagittarius the archer.

Although Sagittarius is often named as Chiron, it's more likely to be Crotus the satyr. The satyrs behaved quite as badly as the centaurs, but they were half human half goat, and Crotus was a marvelous exception. He was an accomplished musician who lived with the Muses. More importantly, he was supposed to be the inventor of archery. Eratosthenes (276-194 BC) identified Crotus with the constellation Sagittarius. It was a few centuries later that the confusion arose.

Sagittarius is one of the twelve constellations of the zodiac. Its brightest stars form an asterism called the Teapot. One of its interesting deep sky objects is Sagittarius A*, a strong radio source which is probably a black hole.

Nebulae
The pictures we usually see of nebulae are colorful: the red of energized hydrogen, the blue of a reflection nebula, and various colors chosen to represent wavelengths of light which are invisible to our eyes. But there are also dark nebulae, nebulae not lit by starlight. They are dark because they are opaque, and only visible when silhouetted against a lighter background.

One such nebula is the Dark Horse in the constellation Ophiuchus. It's part of the Great Rift of the Milky Way. The Great Rift looks like a chasm dividing the Milky Way lengthwise, but it's actually dusty molecular clouds which obscure our view of the Galactic disk.

But probably the best known dark nebula is the Horsehead Nebula (Barnard 33) in the constellation Orion. It's around 1500 light years from us – a stellar nursery that forms part of the Orion Nebula. It stands out against the red glow from the ionized hydrogen gas behind it.

Star gazing
Interestingly, when a horse carries its head too high, they say that it's star gazing. This isn't good for a horse and needs to be corrected, but could the horse just be trying to see the cosmic horses?


You Should Also Read:
Pegasus the Winged Horse
Nebulae
Centaurus the Centaur