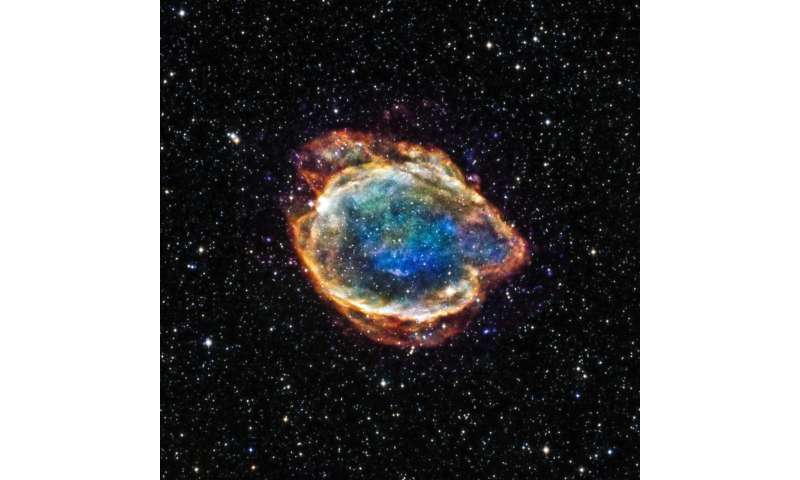 1. A star gives out its own light and heat – the Sun is our nearest star.
Stars are nuclear reactors. Most stars use hydrogen as a fuel. In nuclear fusion hydrogen atoms join together to make helium atoms, and that releases energy. This is also called hydrogen burning.

2. A star is born when a nebula collapses. That takes a long time.
An enormous nebula may slowly collapse until it gets hot and dense – this makes a protostar. If there is enough matter in the collapsing cloud, the temperature and pressure will get high enough for nuclear reactions to happen. The protostar becomes a star.

3. Stars aren't usually born alone.
A nebula can be light years across, and different parts of it collapse to form stars. That means that many stars can come from the same nebula. Groups of stars born together are called clusters. The clusters break up over time. The Sun is alone now, but it was probably born in a cluster.

4. A star's color shows its temperature.
If you look at the night sky, it may seem as though all the stars are white. Our eyes aren't good at seeing faint colors at night. But if you look carefully, you can see some different colors. The color shows how hot a star is. Blue stars are the hottest and red stars the coolest. Yellow comes somewhere in between. The Sun is a yellow star.

5. Stars come in different sizes.
Since we can't see all the stars in the Universe, we can't know which is the biggest and which is the smallest. However the smallest known star is 2MASS J05233822-1403022. It's actually smaller than Jupiter, though it has more mass. It's hard to measure the size of a star, but red supergiant VY Canis Majoris is one of the largest that we know of. It seems to be about 1400 times the size of the Sun. That means if it were where the Sun is, it would swallow up all the planets from Mercury to Jupiter.

6. Big stars don't live as long as small stars.
A massive star has a lot of fuel, but it burns hotter and faster. A star with twenty times more mass than the Sun lives only about ten million years. That isn't a long time for a star. The Sun's lifetime will be a thousand times longer than that, about ten billion years.

7. A really massive star ends its life in a supernova explosion.
The force of gravity would make a star collapse, except that there is also an outward push. This push is from the energy of nuclear fusion.

When hydrogen is used up, the star uses helium a fuel. It fuses helium to make an even heavier element. In fact, a very large star can make heavier and heavier elements until it produces iron. Iron can't be used as a nuclear fuel, so when that's all that's left, fusion stops. There is no more outward force to balance gravity. The gravitational collapse sets off a gigantic explosion. It's called a supernova and it releases more energy than a whole galaxy. What's left after a supernova explosion is a neutron star or maybe a black hole.

8. A star like the Sun ends up as a white dwarf.
When hydrogen is used up and a star is fusing helium, the star expands. This is because helium burning gives out more energy than hydrogen burning, so there is more outward pressure. This pressure pushes the outer layers away, and they form a kind of nebula called a planetary nebula. However these smaller stars will run out of fuel before they can make really heavy elements. When gravity wins the battle with outward pressure, the star collapses into a hot, dense white dwarf which then slowly cools.

9. Stars are very far apart.
The Sun is 150 million km (93 million miles or 8.3 light minutes) away. The next nearest star is Proxima Centauri. It's over 4.2 light years away. That's over 40 trillion km (nearly 25 trillion miles) away. (A light year is the distance light travels in a year.)

10. Stars in a constellation aren't actually close together.
A constellation is a pattern of stars that we see from Earth. It would look different from another place in the Galaxy. We can't tell how far away a star is just by looking at it. What we see are points of light. Whatever their distances are, we see them all as though they were projected onto a screen surrounding the Earth. For example, in the constellation Orion, Bellatrix is 240 light years away from us. Betelgeuse is twice as far away as Bellatrix, and Alnilam is more than twice as far away as Betelgeuse.