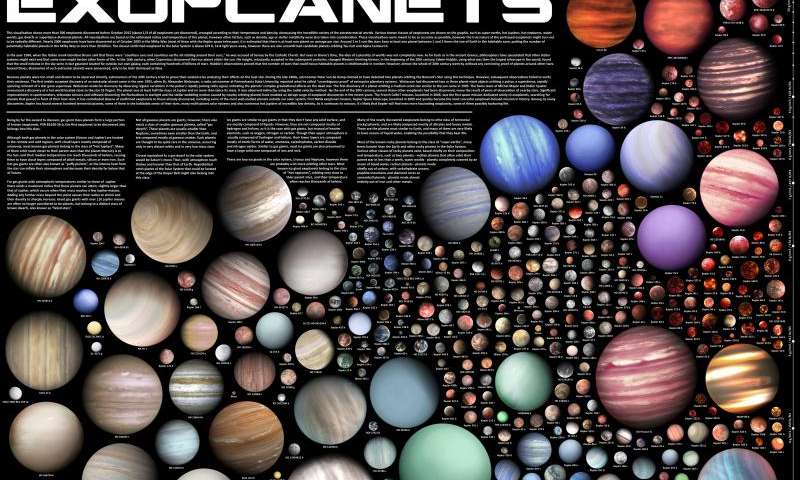 This poster shows more than 500 exoplanets discovered before October 2015 arranged according to their temperature and density. [Credit: Martin Vargic via Universe Today]

Here's a great new poster showing over 500 extrasolar planets (about one quarter of the total) that have been discovered since 1988. This visualization, created by graphic artist and writer Martin Vargic from Slovakia

Astrobiology is the science behind the search for extraterrestrial life.

When the word astrobiology was coined in the 1950s, the idea of life on other planets was more science fiction than science. Although people could imagine life on Mars, there was no way of actually finding out if anything was there. People could wonder about life on planets around other stars, but there wasn't even any evidence of such planets, let alone life.

In 1975 NASA's Viking 1 landed on Mars, and was the first space probe to include an astrobiology component. The results of its tests for microbial life were inconclusive, but most scientists don't think they revealed the presence of Martian life. More sophisticated future missions would be needed.

Astrobiology is, of course, hampered by being the study of something that might not exist. Yet it has been boosted by three major areas of discovery.

The first is the discovery of exoplanets, i.e., planets orbiting stars other than the Sun. Several thousand have been found, and the numbers continue to increase as new techniques, telescopes, software and space missions are developed.

The second discovery is that complex organic molecules are common in interstellar space. These molecules are called pre-biotic because they are the building blocks of life.

The third discovery is the existence of extremophiles on Earth. Extremophiles are organisms that not only live in extreme conditions, but couldn't survive outside them. In the years since their discovery in the 1970s they have been found in extremes of acidity and alkalinity, temperature, radioactivity and other hostile conditions.

Taken together these three findings suggest that the materials of life are widespread and that life is highly adaptable. Therefore if planets are also common, the existence of other inhabited worlds is more credible. By inhabited, I mean containing any form of life, with the understanding that simple life forms are the most probable.

Astrobiology's initial search strategies are based on Earth life. Therefore an important part of astrobiology is an attempt to understand the origin and evolution of life on Earth. Some consider this unimaginative, but we know that terrestrial conditions permitted the development of life, and so far we have no other examples.

In order to search for life elsewhere, astrobiologists are developing bioindicators. These are substances that strongly suggest the presence of life. For instance, substantial amounts of oxygen and methane in a planet's atmosphere would indicate that both are continuously replenished. This is because oxygen and methane react together to produce carbon dioxide and water. Certainly on Earth their levels are maintained biologically.

By the way, although the discipline is called astrobiology, many of the scientists are not biologists. There are, for example, planetary geologists and astrophysicists. In order to target likely planets and stars for study, it's important to understand planet formation and stellar evolution.

There are also chemists who study the chemical reactions of interstellar space by lab simulations and computer models. Other scientists study meteorites containing material unchanged since the formation of the Solar System. They're looking for clues to the conditions prevailing when the planets were forming.

So far there has been no direct or generally-accepted indirect evidence of extraterrestrial life, but the questions astrobiology poses are fascinating. If we don't find life elsewhere, we will still learn a good deal about life on Earth.