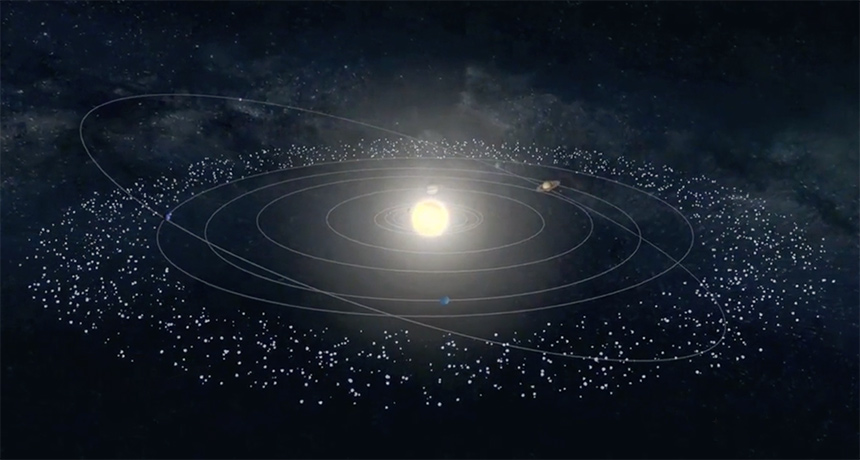 The Kuiper Belt is similar to the asteroid belt. They're both regions full of bits left over from the early Solar System.

It's easy to remember what we call objects in the Kuiper Belt. They're Kuiper Belt Objects (KBOs). Although asteroids are rocks, KBOs are icy bodies made of frozen water and gases with some rock mixed in.

The Kuiper Belt is so far away that if you were there, the Sun would just look like a very bright star.

Astronomers don't measure Solar System distances in kilometers or miles. They use astronomical units (AU), where 1 AU is the distance from the Earth to the Sun. That's about 150 million km or 93 million miles. So when we say that the Kuiper Belt starts at Neptune's orbit 30 AU from the Sun, that is thirty times farther from the Sun than we are.

The Kuiper Belt is really big.

Pluto was the first KBO to be discovered, but they didn't know it then.

Astronomers didn't know there was a Kuiper Belt in 1930 when American astronomer Clyde Tombaugh discovered Pluto. However another American astronomer, named Frederick C. Leonard, suggested that instead of being a new planet, Pluto might the first of a new kind of Solar System object. Everyone else was too excited about a new planet to pay much attention to his idea.

So was there a faraway place full of icy stuff that didn't get made into planets? Over the next half century, more astronomers started to think so.

Gerard Kuiper was one of the astronomers that wrote about this belt of material. But since he also said that it didn't exist anymore, it was odd that it got named after him.

It took 48 years to discover Pluto's moon Charon and another twelve to find the next KBO.

Finding tiny objects a few billion kilometers away was never going to be easy. David Jewitt and Jane Luu hunted on and off for five years before they found one. This made other astronomers sit up and pay attention. Jewitt and Luu wanted to call their discovery Smiley, but it's listed as 1992 QB1.

There are three recognized dwarf planets in the Kuiper Belt.

Besides Pluto, the International Astronomical Union officially lists two other KBOs as dwarf planets: Haumea [how.MAY.ah] and Makemake [MAH.kay.MAH kay]. All the known dwarf planets are smaller than the Moon.

Imagine zipping around the Kuiper Belt and picking up all the KBOs to make them into one planet. It seems as though you'd have a biggie! But the total mass would be about that of Mars, which has only 10% of Earth's mass. Astronomers think there should be lots more matter out there, but no one knows what happened to it.

The Scattered Disk lies beyond the Kuiper Belt.

You might think that once you were at the far side of the Kuiper Belt you'd have reached the end of the Solar System. But no. Then there is still the Scattered Disk which goes out to about 100 AU. The dwarf planet Eris, which is a bit smaller than Pluto, but more massive, is a scattered disk object (SDO).