How to Tell a Planet from a UFO 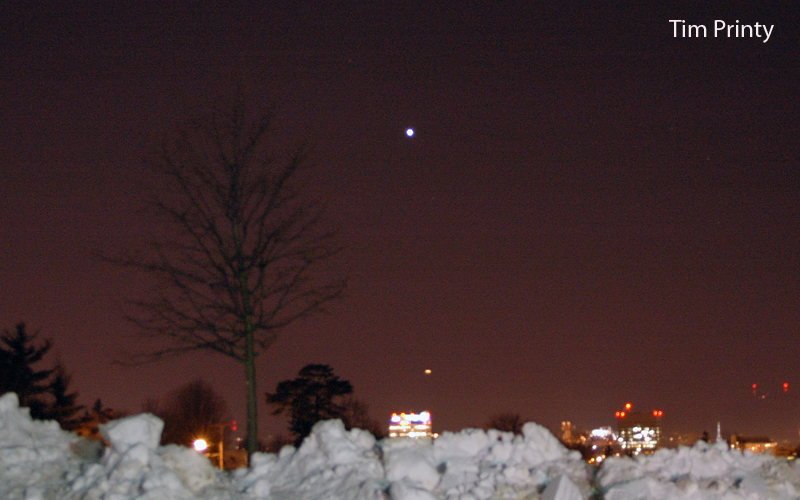 The header image by Tim Printy shows two bright objects. The lower one is an aircraft, the other is Venus. Printy quotes a Detroit Air Traffic Controller: “Do you know how many times we have cleared Venus to land?” (Hendry 27)

If a UFO is an “unidentified flying object”", planets really shouldn't be mistaken for them. Since humans have recognized five planets for thousands of years, they are scarcely unidentified. But in this article I'll list some of the reasons why planets and stars often are reported as UFOs and suggest how to avoid the mistakes.

At the heart of most misidentifications is that most people don't know the night sky.

Let's start with Venus. Apart from the Moon, it's the brightest object in the night sky. It's bright enough to be seen in light-polluted cities and shines even in the twilight. Sometimes you can even see it during the day if you know where to look.

Venus is responsible for a vast number of UFO reports. Before people mistook it for a flying saucer, Venus caused scares about airships and later of enemy aircraft. Although I've never imagined Venus to be a flying saucer, I have mistaken it for an approaching aircraft. But if you keep watching, aircraft change course and reveal their navigation lights. You can't see Venus move.

Nonetheless a planet (or a star) may appear to move in some circumstances. Here are some of them:

In addition to these possibilities for apparent movement, Venus can be so dazzlingly bright that it sometimes seems almost cross-shaped. In 1967 there were several UK sightings of a “UFO shaped like a fiery cross”". Two policemen in Devon, England chased it at high speed through the countryside. The Ministry of Defence investigated, and concluded — as had an astronomer from the British Astronomical Association and the Daily Mirror science correspondent — that it was Venus they were chasing.

Mercury generates the fewest UFO reports because it's hardest to see, but Mars, Saturn and Jupiter often get reported as UFOs.

In October 2010, a reporter arrived with a cameraman at a New York City street, looking for UFOs that had supposedly been sighted earlier. She was excited to find one still hovering, burbling that we mustn't be fooled by its looking like a star.

Actually, it looked more like Jupiter than a star, and when the camera was turned on it, you could see the planet with its four largest moons. But the reporter got particularly excited when the camera zoomed and she could see all these lights moving around. This is a good example of magnification as another cause of apparent movement. As magnification increases, the camera or other optical device has to be steadier. Every tiny tremor makes what you see jump around.

The distortion caused by our atmosphere can also make stars and planets twinkle, change color or seem to make jerky movements. The more air the light travels through, the greater the effect, so objects near the horizon may be strikingly affected. A famous "UFO" case included three “star-like” objects hovering for hours low on the horizon. A senior military man said they "moved rapidly in sharp, angular movements and displayed red, green and blue lights."

Considering the atmospheric effects and other reasons for seeing apparent motion, you may wonder if the star-like objects were perhaps stars. Since the witness gave a good account of their positions, a planetarium program identified them as the three bright stars, Deneb, Vega and Sirius.

So, in summary, how do you tell a planet (or star!) from a flying saucer? Although I haven't seen a definitive alien spacecraft identification guide, there are many excellent astronomy guides available. You can also check the positions of stars and planets for any time and location on Heavens-above.com. Finally, planetarium software such as Stellarium is available as a free open source program.