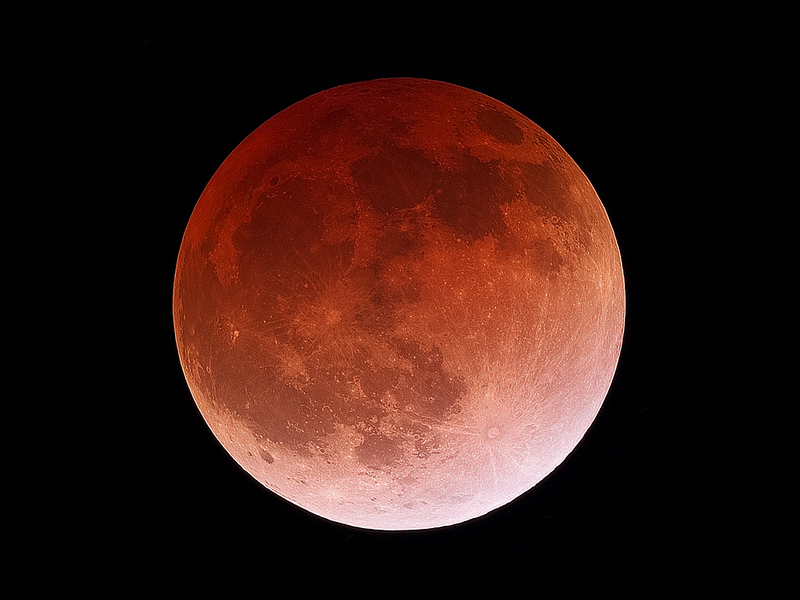 For thousands of years people reacted to eclipses with horror. The Chinese word for eclipse means “eat”, since it seemed that the Sun or Moon was being consumed. Lunar eclipses would have been quite an ordeal, since they last for a long time, and the face of the Moon is often the color of blood when it's “consumed”.

Historical lunar eclipses
Greek historian Thucydides (460-395 BCE.) recounted how the Athenian fleet laying siege to Syracuse was lost following a lunar eclipse. The navy was ready to sail home, but a lunar eclipse occurred. This was deemed to be a bad omen for their departure, so they stayed. Syracuse broke the siege and destroyed the navy, leaving Athens vulnerable to its great enemy Sparta.

Famously, Christopher Columbus, stranded on a Caribbean island, used the knowledge of an impending lunar eclipse to provision his crew. He convinced the locals that the gods were angry with them, and as a sign of disfavor would take the Moon away. With the Moon in shadow, Columbus offered to intercede in getting it back – in return for food for his crew.

How eclipses occur
Eclipses happen through interactions of the Moon, the Sun and the Earths. Some of the ancient Greek philosophers, including Aristotle (384-382 BCE.), realized that the darkening of the Moon during a lunar eclipse was the Earth's shadow. From this they also understood that the Earth was spherical because the shape of the shadow was always rounded.

A lunar eclipse only occurs at the full moon, because that's the only time the Moon could pass through the Earth's shadow.

Looking at a two-dimensional diagram, you might wonder why there aren't eclipses every month. However, in three dimensions we can see that the Moon's orbit is slightly tilted with respect to the Earth's orbit, so the two bodies rarely line up with the Sun. In this diagram showing the orbits of the Earth and the Moon, there are two points where the orbits cross. These are called nodes. Only if the Moon is full when it's near a node do the Sun, Earth and Moon line up for a lunar eclipse.

A solar eclipse occurs when a new moon is on a node, and therefore aligned with the Earth and the Sun. Since the Moon is small compared to the Earth, it casts a narrow shadow. That's why the Sun is never totally eclipsed for more than seven and a half minutes, and the eclipse isn't visible except from a narrow band of Earth.

On the other hand, the Earth is large and comparatively close to the Moon, so it casts a big shadow during a lunar eclipse. That means that totality goes on for around an hour and is visible from the whole nightside of Earth.

Earth's shadow
There are two parts to the Earth's shadow: the penumbra and the umbra. The umbra is darker because Earth blocks the Sun's direct rays, but there is some direct sunlight in the penumbra. You would scarcely notice the subtle darkening of the Moon passing through the penumbra.

The Moon turns red
When the Moon is fully eclipsed, it's a reddish color. It would be black if Earth had no atmosphere. However sunlight filters through the atmosphere. Sunlight is a mixture of all the colors of the spectrum, and our atmosphere scatters the bluer light, leaving the red colors. The more air the light travels through, the redder it becomes. If you look straight up at the blue sky, you will see that the blue color is most intense straight overhead, since the light travels the shortest distance to your eyes. If you're looking at the setting Sun, the light has traveled a much longer distance and is noticeably red.

At totality, Earth blocks all direct sunlight, but some light comes the long way through the atmosphere. The eclipse varies from a brownish color to a bright copper red, depending on the amount of dust in the atmosphere. Volcanic dust can produce intensely-colored sunsets, but cause dark eclipses.

The view from the Moon
Interestingly, if you were on the Moon during a total lunar eclipse, you'd see a solar eclipse. Earth's nightside would be faintly visible, as in this work by Hana Gartstein. The Sun and the Moon appear about the same size from Earth, so the Moon's disk just covers the Sun's disk. This gives us a good view of the Sun's corona. However when the Earth is seen from the Moon, it appears much larger than the Sun, so it would block out much of the corona. The reddish circle is sunlight filtering through Earth's atmosphere.

You Should Also Read:
Blood Moons and Lunar Tetrads
Are There Solar Eclipses on the Moon
Moon Phases and Eclipses â€“ Help for Teachers