How Big Are the Biggest Stars 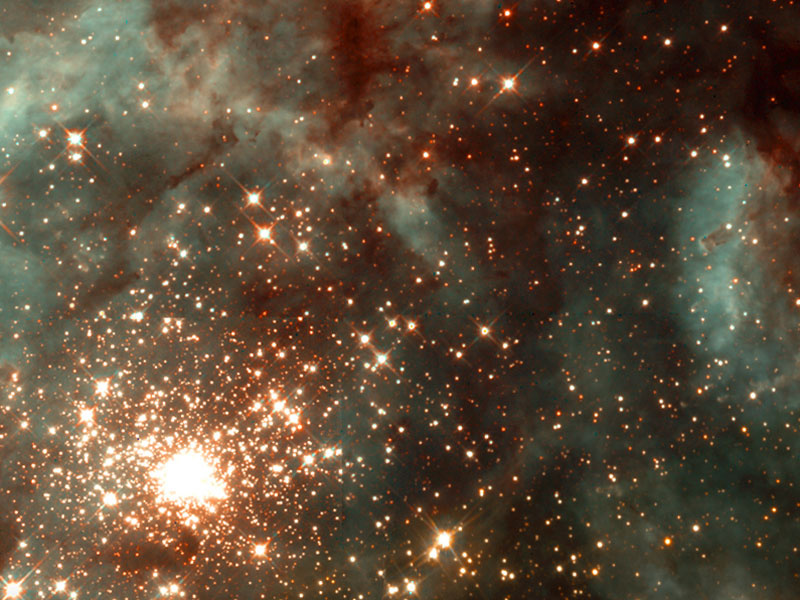 All stars are big compared to our Earthly experience. Even the smallest red dwarf is ten times the width of the Earth. About three-quarters of the stars in the Milky Way are red dwarfs, and our Sun is bigger than all of them. If we could cut the Sun in half and line up a hundred Earths across it, they wouldn't reach from edge to edge.

Although it's big to us, the Sun is classified as a dwarf star. Here's a short tour of some of the stars that dwarf the Sun, including some that have astonished astronomers.

Dwarfs and giants
The main sequence includes all of the stars, such as the Sun, whose nuclear fuel is hydrogen. But the largest and hottest ones are much bigger and brighter than the Sun. There's a good example of such a star in the Orion Nebula. The four brightest stars of the Trapezium star cluster form a trapezium shape, and the brightest of those is Theta1 Orionis C. Its mass is forty times that of the Sun and it has eight times the Sun's radius. Nonetheless it's considered a dwarf star – a blue dwarf – because it's still on the main sequence.

Main sequence stars were called dwarfs because when they left the main sequence they became giants. When a star has used up its hydrogen fuel and is burning heavier elements, it produces more heat. The star then expands due to increased outward radiation pressure. In the very distant future the Sun will swell into a red giant. Earth will be made uninhabitable and eventually swallowed up, along with Mercury, Venus and Mars.

Arcturus in the constellation Boötes is a well-known red giant, one of the brightest stars in the sky. It's an important navigation star, and has been prominent in the star lore of many cultures throughout history. The Sun is tiny compared to Arcturus. [Illustration by Bob King]

Supergiants and hypergiants
The larger, hotter stars won't become mere giants when they leave the main sequence. They will be supergiants, and Orion has two of them. Rigel, the giant's left foot, is a blue supergiant and Betelgeuse, the right shoulder, is a red supergiant.

Compared to the Sun, Rigel is almost eighty times wider, over twenty times as massive, and 120,000 times more luminous. Betelgeuse isn't hotter than Rigel, but it's much bigger. With a radius of 950-1200 times that of the Sun, it would probably reach beyond the orbit of Jupiter if it were in the Sun's place.

There are supergiants bigger than Betelgeuse, and there are also some even more massive known as hypergiants.

The Largest Superstar?
There seems to be a number of different answers to the question of which star is the largest. It's extremely difficult to work out the mass or radius of a star, especially single stars at a great distance. This is why we tend to see a range of sizes. Fortunately, further observation may narrow the gap between the upper and lower limits.

Looking towards Canis Major, there's a red hypergiant called VY Canis Majoris. Calculating its size has been made exceptionally difficult by frequent massive flares. However a team studied it in 2012 using the Very Large Telescope Interferometer (VLTI) in Chile, and their measurement of its radius was 1420 ± 120 solar radii. (The solar radius is a unit equal to the Sun's radius.) That's bigger than the upper limit for Betelgeuse.

In the southern constellation Centaurus lies V766 Centauri, the biggest known yellow hypergiant. Its radius was measured at 1315 ± 260 solar radii by another team using the VLTI. VY Canis Majoris may well be larger, but there is an overlap in measured size.

There's also W26 in the Westerlund 1 supercluster. In October 2013 a Royal Astronomical Society press release said that its radius was 1500 solar radii and "probably the largest star ever discovered". However other astronomers propose radii for hypergiants NML Cygni and UY Scuti which are greater than this.

So which is the largest star? I can only say that there are some stupendously big stars out there, but no convincing evidence as to which is the biggest.

Most Massive Superstar?
If we look towards the Galactic Center, in the constellation Sagittarius lies the Pistol Nebula. It's illuminated by the Pistol Star, a blue hypergiant with a radius of about 300 solar radii. But its mass of 80-150 solar masses could put it at the Eddington limit. This is the theoretical upper limit for the mass of a star, and it's generally accepted as 120-150 solar masses. (A solar mass is equal to the mass of the Sun.) The star is highly luminous, taking about twenty seconds to match the Sun's annual energy output.

However it looks as though the most massive known star is R136a1 in star cluster R136. This is in the Tarantula Nebula, which is part of our neighboring galaxy the Large Magellanic Cloud. R136a1 weighs in at a mighty – and supposedly impossible – 256 solar masses. There are three other stars in the cluster that are also over the Eddington limit.

The discovery of these monster stars in 2010 caused some consternation in the astronomical community. However the Eddington limit refers to star formation, and it seems likely that these stars are the result of mergers of lower mass stars.


You Should Also Read:
Life and Death of Stars
Orion the Hunter
Tarantula Nebula (Doradus 30)