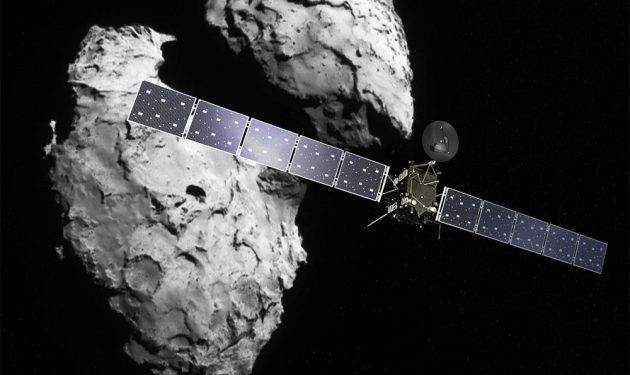 Comets can tell us about the early Solar System, and they may have brought the chemicals of life to ancient Earth. The Rosetta mission was the first mission to meet a comet in deep space and go into orbit around it.

Rosetta is a mission of the European Space Agency (ESA).
ESA was founded in 1975, and now 22 countries are members. The Rosetta mission got official approval in 1993, nearly three decades ago.

The mission's orbiter was named Rosetta and the lander Philae.
Rosetta and Philae are places in Egypt where there were stones with ancient Egyptian hieroglyphics. No one could understand hieroglyphics in the nineteenth century. But these stones also included writing in known languages. The Rosetta stone was the key to decoding the hieroglyphics, but the Philae stone was also useful. ESA hoped that the Rosetta mission would find a key to help us understand the evolution of the Solar System and life on Earth.

Rosetta was launched on March 2, 2004 for a 2014 meeting with Comet 67P/Churyumov-Gerasimenko.
The launch was originally planned for 2003 to meet comet 46P/Wirtanen. But it had to be postponed because of problems with the launch rocket. This meant that Rosetta wouldn't be able to get to comet Wirtanen, so they had to choose another comet.

Help from gravity
ESA coulddn't launch Rosetta straight into the outer Solar System to chase the comet. Existing launch vehicles aren't powerful enough to accelerate a spacecraft straight into the outer Solar System. Space missions use gravity assists for extra power. A planet's gravity can speed up — or slow down — a passing spacecraft. Scientists plan the spacecraft's course to get extra acceleration while saving fuel. A gravity assist is also known as a swing-by or a gravity slingshot.

Rosetta used Earth's gravity three times and the gravity of Mars once.

1. The first gravity assist from Earth in March 2005 helped Rosetta get to Mars. On the way to Mars she observed NASA's Deep Impact impactor hit comet Tempel 1 — this was on the Fourth of July!

2. A February 2007 Mars gravity assist corrected Rosetta's speed. It had to be slowed down to make up for the differences in the orbits of Comet Churyumov-Gerasimenko and Comet Wirtanen.

3. November 2007 was the second second gravity assist from Earth. And something funny happened when Rosetta was on the way home.

Early in November several observatories spotted a “near Earth object” heading towards Earth. It would come closer to Earth than many communications satellites. The Minor Planet Center that keeps track of asteroids gave it a number: 2007 VN84.

An asteroid headed towards Earth at the same time as Rosetta could have been a danger to the spacecraft. But maybe you've already guessed that the mystery asteroid was Rosetta. A Russian astronomer was the first to realize it, and 2007 VN84 was quickly erased from the minor planets database. If spacecraft could laugh, Rosetta would probably have been amused as she made her way to the asteroid belt to see a real asteroid: 2867 Steins.

After that, Rosetta made her last visit home in November 2009. It was to get one last gravity assist to return her to the asteroid belt for a fly-by of asteroid 21 Lutetia. Then a new phase of the adventure would begin.

Rosetta is the first spacecraft to travel farther away than Mars using only solar panels for electricity. Other missions to the outer Solar System had back-up generators that use radioactive materials. But after the Lutetia fly-by, Rosetta would be going so far from the Sun that there wouldn't be enough sunlight to power all the instruments.

So in June 2011 Rosetta went into hibernation. The small amount of power available was used to keep the computer running, and also the heaters that would stop the instruments from freezing. Rosetta spent over two and a half years in deep space out of contact with Earth.

At last, on January 20, 2014, Rosetta's “alarm clock” went off, and the spacecraft came safely awake. It was time to catch that comet. Rosetta caught up with the comet and on August 6th went into orbit around it.

On November 12 Philae landed on the comet. In fact, it seems to have landed three times with two bounces. Philae collected and sent data until the battery ran down. There was hope that with more light, Philae might wake up again. On June 14, 2015 that happened. There were more short communications, but the last one was on July 9.

The end of the story. Philae was finally found in September 2016, less than a month before the end of the mission. The mission ended on September 30, 2016 with Rosetta coming out of orbit and landing on the comet. About every six and a half years, Comet 67P will come into our part of the Solar System — with Rosetta and Philae on board — as it heads around the Sun.