Meteors and Meteorites – Facts for Kids 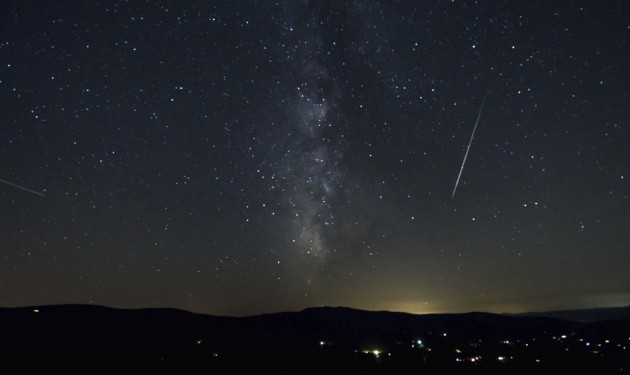 What's the difference between meteors and meteorites? And what is a meteoroid? Are they different from shooting stars, falling stars and fireballs?

You may not know the word meteoroid. Even though astronomers use the word, there's no official definition for it, so it's a bit confusing. A meteoroid is a small rock in space. But astronomers don't agree on how big a space rock can be before it's an asteroid. Some people think of a meteoroid as less than ten meters across (about 11 feet). Others say meteoroids can be up to ten times that size. In addition, many astronomers use the word asteroid for rocks of any size in the asteroid belt.

A meteoroid seen in the Earth's atmosphere is a meteor.

On a clear dark night you can sometimes see meteors. The rock may be as small as a grain of sand, but you can see the bright trail it leaves behind. That's because a meteoroid entering our atmosphere collides at high speed with molecules of the atmosphere. This makes the air behind the rock glow, and the trail is what we see — the meteor.

Shooting star or falling star are common names for a meteor.

Stars and meteors may seem to be about the same size. But stars are large fiery nuclear reactors like the Sun. They only look small because they're so far away.

A fireball is a very bright meteor.

Most meteors are small enough to burn up completely as they travel through the atmosphere. They don't last long, so if you aren't looking in their direction, you won't have a chance to see them. But sometimes they are extremely bright and leave a fiery trail behind them as they make their way across the sky. If what you see is brighter than Venus, this is a fireball. Venus is the brightest planet, so bright that it often leads to people making UFO reports.

You can often tell what a scientist studies by finding the meaning of the Greek word in the name of the science. For example, a biologist (bios = life) studies living things, a geologist (ge = Earth) studies the Earth, and a zoologist (zoion = animal) studies animals. However a meteorologist studies weather and the atmosphere. We get the word meteor from the Greek meteoros, meaning above the ground. This eventually came to mean something happening in the atmosphere. From the time of the ancient Greeks into the eighteenth century, people thought that meteors were some strange behavior of the atmosphere. The science of meteors is known as meteorics and someone who studies them is a meteoricist.

If a meteor lands on the ground, it's a meteorite.

A meteoroid is a grain or rock in space. If it enters our atmosphere, it creates a meteor. But if it lands on the ground, it's a meteorite. You might be lucky enough to find one some day. Certainly, you can see them in museums and even in some stores.

You Should Also Read:
Meteor Shower - the Perseids
Asteroid Facts for Kids
Meteor or Meteorite & Other Posers