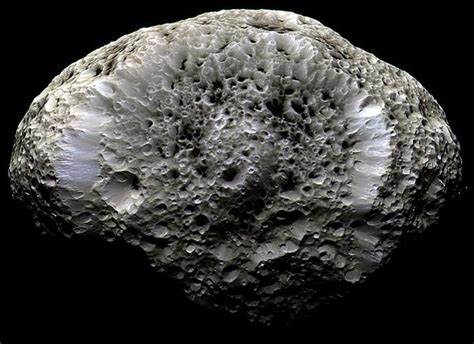 Saturn has lots of moons, 92 known at the last count. They are remarkable in many ways, but perhaps the strangest one is the misshapen and unpredictable Hyperion (hi-PEER-ee-un).

History
We've known of Hyperion for over 150 years, but haven't known much about it until this century. The moon was discovered in 1848 by American father and son astronomers, William Cranch Bond and George Phillips Bond, and independently by English astronomer William Lassell. It was Lassell who proposed the moon's name. Hyperion was – like his brother Saturn – one of the Titans of classical mythology.

Hyperion is a mere speck seen through a telescope on Earth, because it's distant and small. Even at its closest to us, Saturn and its moons are 1.2 billion km (746 million mi) away. That's about eight times as far away as the Sun is. Saturn's large moon Titan is bigger than Mercury, and it accounts for 96% of the total mass of the moons plus the rings. There isn't much left over for the rest of the moons.

Learning about the small moons had to wait for space probes to get up close. The first images of Hyperion came from Voyager 2's 1981 flyby of Saturn. It wasn't close enough for surface detail, but photographs show a highly cratered surface on a potato-shaped moon.

The shape is instructive. If a body has enough mass, gravity pulls it together into a roundish shape, and Hyperion didn't make it. We've since found Saturn's moon Mimas (MY-muss) to be the smallest known spherical body, and that Hyperion has just 15% of the mass of Mimas.

Orbit and rotation
Hyperion takes 21 days to orbit Saturn. It's around 1.5 million km (930,000 mi) from Saturn in an eccentric orbit. Orbits are ellipses, i.e., squashed circles, and eccentricity is a measure of how squashed the circle is. A perfectly circular orbit would have zero eccentricity.

We'd expect a moon like Hyperion not only to have a fairly rounded orbit, but also to be tidally locked to Saturn. When a body is tidally locked, it takes the same amount of time to orbit as it does to rotate once on its axis. This means that the same side of such a moon always faces the planet. Our Moon's orbit is locked in this way, but Hyperion's is not.

Whenever NASA's Cassini spacecraft did flybys of Hyperion, no one knew which side of the moon it would see or which surface features would be visible. Hyperion's rotation is so chaotic that it doesn't even have a well-defined equator or poles. Both its rotation time and orientation in space vary unpredictably.

The culprit is the big moon Titan. The two moons are close enough to be in an orbital resonance. For every four Titanic orbits, Hyperion orbits Saturn three times. The gravitational effects on little Hyperion vary and it speeds up or slows down each time Titan and Hyperion pass each other and line up with Saturn.

It looks like a wasp nest
On September 25, 2005 the Cassini spacecraft made a close flyby of Hyperion. The moon's surface has a pinkish tone to it. Its biggest crater is about 120 km (75 mi) across and 10 km (6.2 mi) deep. That's quite a size on a moon that measures 410x260x220 km (255x163x137 mi). But that wasn't what grabbed the attention of the scientists. Hyperion's surface, as you can see in the header image, has a spongy look to it – or, as some observers commented, it resembles a wasp nest.

And the craters are weird. Normally, a meteorite gouges out a hole in the surface it hits, and rock and dust (called ejecta) fly out. The ejecta drops back down, mostly blanketing the new crater, but also dropping some into neighboring craters. Over a long time period craters get partly filled. But not Hyperion's craters. They're sharp-edged and deep, and their floors were covered in a dark reddish material.

Scientists would love to know what this mystery material is, especially since it matches the dark side of the moon Iapetus.

Rubble-pile moon
Hyperion is certainly not titanic in size. One theory is that its small size and irregular shape are due to its being a piece of a larger moon broken up by an impact long ago.

From Cassini measurements we know that Hyperion has a surprisingly low density and is, in fact, highly porous. The moon is mostly ice with a bit of rock, and 46% of it is empty space. Gravitational force depends on matter, and Hyperion has so little matter for its size that its surface gravity is weak.

If Hyperion formed from the rubble left by an impact, it would explain a number of features. The chunks of ice and rock left by the impact were brought together, but the gravitational pull wasn't strong enough to compact them. This would explain the porosity. In turn, the porosity would explain the shape and depth of the craters. A meteor impact would compress the surface to make a hole, but wouldn't gouge out any material. A hole could be made without creating any ejecta.

Bye bye Hyperion
Cassini's final flyby of Hyperion was on May 31, 2015, but the data collected is probably still a bit ahead of the scientists being able to make sense of it.