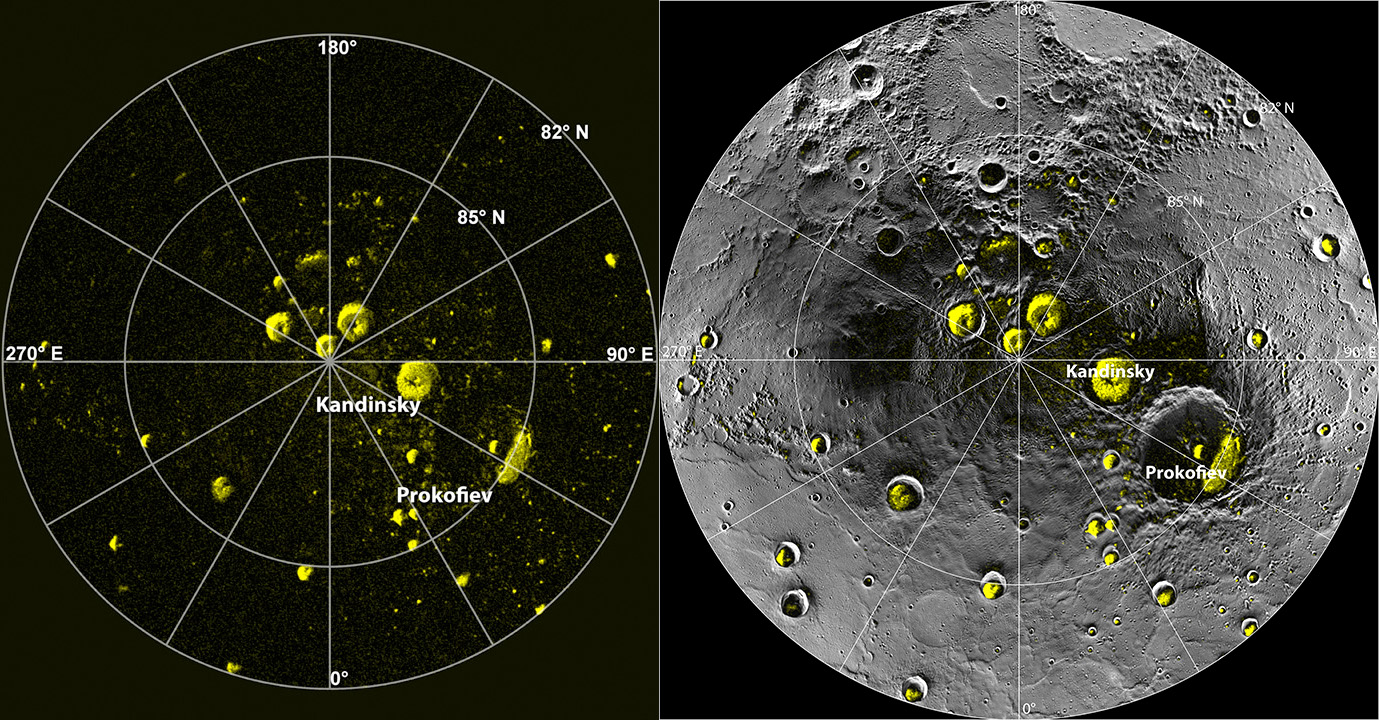 Mercury was a mystery planet for a long time. It's so close to the Sun that it's only visible around sunrise and sunset, and the Sun's glare wipes out surface detail. Space probes have now studied Mercury, and it's turned out to be full of surprises.

1. A day on Mercury is longer than a year on Mercury.
Mercury takes 88 Earth days to orbit the Sun, so it has a short year. It orbits very quickly, but turns on its axis very slowly. On Earth, from one noon to the next is about 24 hours. On Mercury it's 176 Earth days, which is two Mercurian years.

2. Mercury has the most eccentric orbit of all the Solar System planets.
Planets are in elliptical orbits. You can think of an ellipse as a squashed circle, and its eccentricity tells us how squashed it is. If it's actually circular, the eccentricity is zero, and if it's very stretched out, it could be close to 1. The eccentricity of Venus is 0.007 – its orbit is almost round. But Mercury's eccentricity is 0.205. When Mercury is farthest from the Sun it's about 1.5 times more distant than when it's at its closest.

3. Mercury has double sunrises.
The Sun would usually seem to be moving slowly from east to west, because Mercury rotates on its axis in the same direction as Earth does. But when Mercury is close to the Sun, its movement in orbit is faster than its rotation. This creates very odd effects like double sunrises, and the Sun stopping its westward movement and reversing it for a time.

5. Mercury doesn't have seasons.
We have seasons on Earth because our planet's axis is tilted by 23.5°. This diagram shows how the tilt of the axis creates seasonal changes as Earth orbits the Sun. Mercury's axis isn't tilted, so there aren't seasonal differences between northern and southern hemispheres.

6. Mercury has the biggest range of temperatures from day to night.
On the day side, the temperature depends on the location relative to the Sun. The highest temperatures are in equatorial regions with the Sun directly overhead. It can be as hot as 427 °C (800 °F). The temperature on the night side doesn't vary much and is about -173 °C (-280 °F). Since Mercury's axis isn't tipped, the poles get little or no light and are always colder than -93 °C (-136 °F).

7. There is ice on Mercury.
On a planet so close to the Sun, we don't expect water in any form. However the floors of deep craters at the poles are never exposed to direct sunlight, and temperatures there are always extremely cold. In recent years there had been increasing evidence to suggest that there is ice in these shadowed places, and it was confirmed in 2014 by Nasa's MESSENGER spacecraft. (The image at the top of this article shows in yellow where the ice is.)

8. Mercury is the smallest planet, and it's shrinking. It also has an enormous core for its size.
Earth's iron core is 54% of its diameter, but Mercury's is 85%. It suggests that Mercury was formerly a larger planet before a collision in its distant past stripped away the old crust and mantle. As the core slowly cools, it's causing collapses in the planet's crust. Although the shrinkage is extremely slow, there is evidence that it's happening.

9. Caloris Basin is one of the Solar System's biggest impact basins.
Mercury's Caloris Basin is 1550 km (960 mi) across. The impact that created it must have been incredible. Due to the eruptions of lava, a ring of material over 2 km (1.3 mi) high surrounds the basin. The shock wave shook Mercury so severely it caused surface fracturing on the opposite side of the planet.

10. It took two centuries to solve the problem of Mercury's orbit.
In this drawing of Mercury's orbit over a long period of time, you can see a change that's known as precession. (It's highly exaggerated in the picture.) The perihelion is where Mercury is closest to the Sun. And although the shape of the orbit doesn't change, over time the perihelion moves around the planet. Other planets do this too and Newton's laws explain it. For Mercury's orbit, Newton almost explains it, but not quite. It wasn't until 1915 that Einstein's General Theory of Relativity provided the equations that predicted the changes in Mercury's orbit.


You Should Also Read:
ABC of Astronomy – E is for Ecliptic
Water Water Everywhere
Gravitational Waves – What Are They?