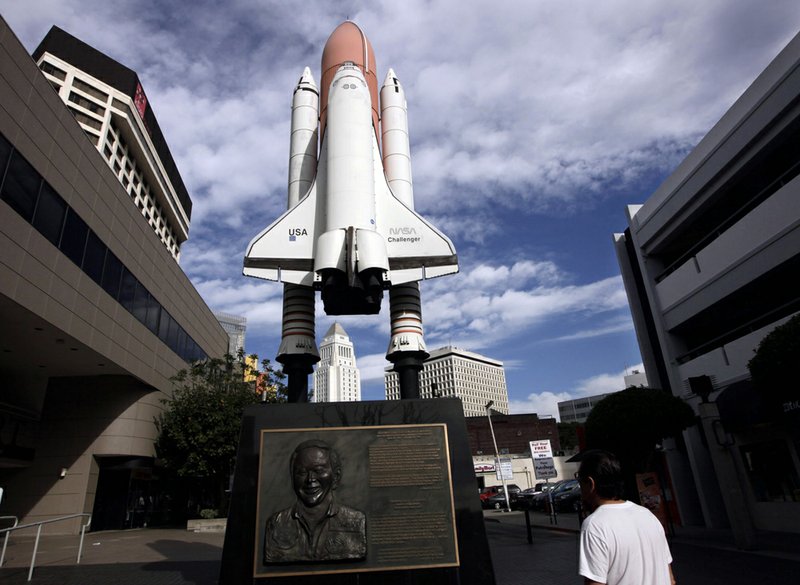 Traveling into space is an astronaut's dream. Yet it's a dangerous occupation, both in the realization and in the training. A number of astronauts have paid the ultimate price for their dreams. Where are their memorials?

”If we die we want people to accept it. We’re in a risky business, and we hope that if anything happens to us it will not delay the program. The conquest of space is worth the risk of life.”
–Virgil “Gus” Grissom
Grissom would probably have been the first man on the Moon. But on January 27, 1967 he and his Apollo 1 crew mates, Edward H White II and Roger Chaffee, perished on the launchpad in a horrific fire during an exercise. They, along with the crews of the Challenger and Columbia space shuttles, and seven other astronauts, are commemorated in the Astronaut Memorial at the Kennedy Space Center in Florida.

In 1991 the Astronaut Memorial at the Kennedy Space Center in Florida was dedicated to the memory of astronauts who'd died in US human spaceflight missions or while training for them. Designed by Wes Jones, it features a beautiful highly-polished granite wall that reflects the sky. The names of the astronauts are distributed around its ninety panels. The letters are cut right through the stone so that light – artificial or sunlight – comes through.

Most of the 24 named individuals were career NASA astronauts, but not all. The two best known exceptions are probably Christa McAuliffe, the Teacher in Space on board Challenger, and Israeli Air Force pilot Ilon Ramon, a member of Columbia's crew.

“The artifacts here on display are not easy to look at. . . . It is our hope that . . . we will help remind the world, that every launch, every discovery, every measure of progress, is possible only because of the sacrifice of those we have lost."
–Charles Bolden, Administrator of NASA
In 2015 Challenger and Columbia were honored with a permanent addition to the shuttle Atlantis exhibition. “Forever Remembered” contains personal memorabilia, mostly belonging to the families, and reflecting the individual interests and personalities of the astronauts. (Photo: NASA/Kim Shiflett)

Space Shuttle Challenger Memorial
Challenger broke up 73 seconds after launch in 1986. The identifiable remains were returned to the families. Challenger Commander Dick Scobee and the Captain Michael Smith were buried in Arlington. Some partial remains couldn't be identified and were cremated and buried together near Scobee's grave. The spot is marked by a bronze plaque designed by Robert Harding, with the poem "High Flight" by John Gillespie Magee, Jr., on the reverse.

Space Shuttle Columbia Memorial
Sadly, the Challenger Memorial isn't alone. The shuttle Columbia broke up on February 1, 2003 as it re-entered the Earth's atmosphere following a highly­ successful mission. Three of the crew – David Brown, Laurel Clark and Michael Anderson – lie not far from the Challenger astronauts.

Here is the Columbia Memorial which was dedicated in 2004. It's a bronze version of the mission patch designed by the crew. On the reverse is a bronze rendering of the official crew photograph.

Fallen Astronaut
I wonder if anyone will ever again see a touching memorial called the Fallen Astronaut. It's a reminder of the comradeship of those who go into space that transcends national boundaries. The tiny figurine, created by artist Paul Van Hoeydonck in 1971, is an abstract representation of of an astronaut in a spacesuit. It lies next to a plaque listing the names of astronauts who had died.

The Apollo 15 crew took the figurine to the Moon. David Scott and James Irwin, without publicity (or mentioning it to NASA), placed it at the Hadley-Apennine landing site. Eight astronauts and six cosmonauts were named. Later, Scott expressed sorrow at two missing cosmonaut names. The secrecy of the Soviet space program meant that the west had been kept unaware of their loss at the time.

Challenger Center for Space Education
As an educator, I found the final memorial the most moving. It's not made of stone or bronze, but of love and determination. The families of the Challenger crew decided to try to continue the educational goals of the mission. The result was the Challenger Center for Space Science Education. There are centers scattered about the USA where students and teachers can be inspired by space. In addition, activities for classroom use mean that thousands of teachers in thousands of classrooms throughout the country bring these programs to half a million students a year.

The Center's long-term goals are to: increase student interest in and enthusiasm for the sciences, mathematics, and technology; improve students’ knowledge and problem-solving skills in these fields; teach students to work in teams and think critically.


“The world knew how they died; we wanted the world to know how they lived and for what they were willing to risk their lives.”
–June Scobee Rodgers

You Should Also Read:
Carrying the Fire – book review
Cosmonauts – Birth of the Space Age
Art on the Moon - Fallen Astronaut