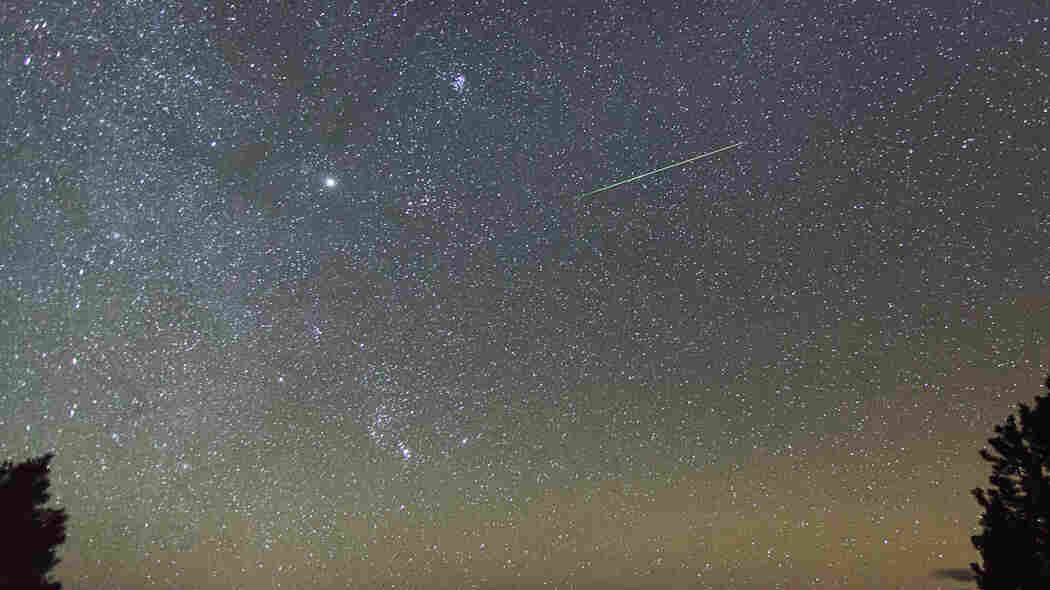 The Orionid Meteor Shower in 2012, as seen in Bridgeport, California. [Credit: Jeffrey Sullivan/Flickr]

A comet can be a splendid celestial vision as it appears in our skies on its journey around the Sun. The most famous one is Halley's Comet whose earliest recorded visit was some twenty-two centuries ago. English astronomer Edmond Halley (1656-1742) didn't discover it, but he did discover that what had seemed to be many comets was the same one returning every 75-76 years.

The comet itself is next expected in 2062, but it has left behind two annual meteor showers that need only a dark sky and good weather to see. One is the springtime Eta Aquariid shower, and the other is the Orionid shower that peaks around October 20-22. But what is the connection between this famous comet and a meteor shower?

Meteors
Meteors are trails of light that we see in the sky. They're caused by meteoroids, space debris that ranges in size from dust grains to boulders. Any part of a meteoroid making it through our atmosphere to land on Earth is a meteorite.

A meteor isn't the space debris itself. It's the bright trail left by the meteoroid as it streaks across the sky. If you've seen these “shooting stars” in the sky, or meteorites in a museum, you might expect that meteors are usually large. In fact, the meteors in a shower are more likely to be tiny grains, smaller than the crumbs from your breakfast toast.

We don't see the bits of debris entering our atmosphere at high speed. But we do see the trail of glowing gas that they leave behind as meteoroids interact with the molecules of the air.

Meteoroids enter the atmosphere all the time. One NASA estimate is that 100 tons a day of meteor dust lands on Earth. So with some patience and a clear dark sky we might see a meteor at any time. These random meteors are called sporadics, and you might see three or four of them an hour on any clear night. However to get a shower of meteors needs a lot of debris in one region, and comets are a good source.

Meteor showers
When Halley's Comet last visited us in 1986 the European Space Agency (ESA) sent a probe. The photograph from ESA's probe Giotto was our first ever sight of a comet nucleus. You can see the gas and dust and bits of rock that are spraying out as the comet warms up on its approach to the Sun. So a comet leaves behind a debris stream. As Earth orbits the Sun, its orbit regularly intersects some of these debris streams.

The first shower to be connected to a specific comet was the Perseids that happen in August. The calculations of Italian astronomer G.V. Schiaparelli found that the orbit of comet Swift-Tuttle matched the orbit of the debris. Yet the December Geminids were a mystery for a long time until asteroid 3200 Phaeton was discovered with an orbit that matched that of the Geminids.

The Radiant
The meteors in a shower all seem to radiate from a point in the sky called the radiant. The constellation where the radiant is located gives the meteor shower its name. The Orionid radiant is near the stars that represent Orion's club. But you shouldn't focus on the radiant. The trails will be only short there. You will see longer trails if you look further away from the radiant.

The Orionids
The Orionid shower doesn't produce lots of meteors, and since they tend to be faint, a bright Moon can be a problem. They're also known for being very fast. They dive into our atmosphere at about 66 km/sec (40 miles/second).

On the other hand, they also tend to leave trails that last a few seconds after the meteoroid is gone. In addition, there are also some very bright Orionids. A meteor brighter than the planet Venus is called a fireball, and it's spectacular.

Some observing hints
Find the darkest convenient place available. You don't need any special equipment – your eyes can do the job. But be sure to give your eyes time to adapt to the dark if you want to be able to pick out fainter meteors. White light – flashlight, phone etc. – will destroy your dark adaptation instantly. If you have red light, that's good. You could also cover a flashlight with clear red plastic.

In order to get a wide view of the sky, and keep you from getting a sore neck, you should lie down. A blanket or camping mattress is useful, or a reclining lawn chair. Be sure to dress warmly, and you might want to take a hot drink. Of course, take the normal precautions for being outside in the dark and cold. Stay safe, and enjoy the night sky.

You Should Also Read:
Halley's Comet
Meteor or Meteorite and Other Posers
Meteor Shower – the Perseids