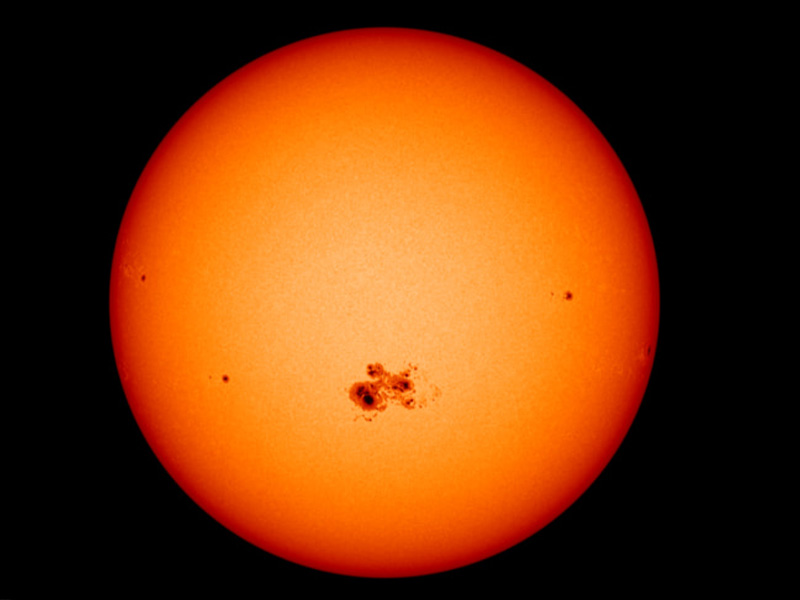 Image of the Sun from NASA's Solar Dynamics Observatory

How old is the Sun?
It's 4.6 billion years old and about halfway through its lifetime.

How does the Sun compare to other stars?
The Sun is bigger than 85% of the stars in the Milky Way. Most of the stars are red dwarfs, the very smallest stars. There are also some stars much bigger than the Sun. One of the biggest we know of is UY Scuti. If it were where the Sun is, it would take up all the space out to the orbit of Jupiter.

The “Goldilocks zone”
Earth is 150 million km (93 million miles) from the Sun. The Sun's energy makes life possible on Earth because we're in its habitable zone, sometimes called the Goldilocks zone. It's the area around a star where life might exist, because there's energy, the right temperatures, and liquid water. Think of “Goldilocks and the Three Bears.” Venus and Mercury are too hot, and Mars, which has lost its atmosphere, is too cold. But Earth is just right.

The Sun's energy
The Sun's energy comes from its center – the core. It's a small part of the Sun, but the pressure is extreme, and the temperature is 15 million °C (27 million °F). It's where nuclear fusion happens. The Sun is a giant nuclear reactor. Hydrogen atoms are squeezed together to make helium atoms, and that releases energy. It's the energy that makes the Sun shine. Although we need the warmth and light from the Sun, it isn't all good for us. The Sun also gives out invisible radiation that can cause sunburn and cancers.

The solar atmosphere
The Sun's atmosphere isn't like our atmosphere. It has three layers and they're hot and dangerous.

If someone glances at the Sun, they're seeing the bottom layer of the atmosphere. It's called the photosphere. Above it is the red chromosphere. The outer layer, the corona, is thin and stretches out a few million kilometers into space. The photosphere is so bright it keeps us from seeing the chromosphere and the corona from Earth. However they are visible during a total solar eclipse when the Moon blocks the disk of the Sun.

NOTE Remember: don't stare at the Sun. It can cause permanent damage to your eyes. Use good eclipse glasses if you watch a solar eclipse, and don't take them off except during totality.

Sunspots
The photosphere usually has some sunspots. They look dark, but at 3500°C (6300°F), they are actually bright and hot. They look dark because the rest of the photosphere is nearly twice as hot. Many sunspots are the size of the Earth, and some are as big as Jupiter. Their numbers increase and decrease over an 11-year cycle.

Space weather
Radiation isn't all that the Sun gives out. The corona sends out a stream of invisible particles called the solar wind. The solar wind doesn't just pass Earth. It carries on past the outer planets and through the Kuiper Belt. It only stops when it meets the space between the stars several billions of kilometers away.

The solar wind can be dangerous, but Earth's magnetic field protects us. However, sometimes the Sun's photosphere throws out a lot of dangerous high energy particles called a coronal mass ejection (CME). If one of these hits Earth, it may just cause a lot of beautiful Northern Lights. Stronger ones are a problem. In 1989 the effect of a CME brought down the Quebec electric power grid in Canada, leaving the entire province in darkness.