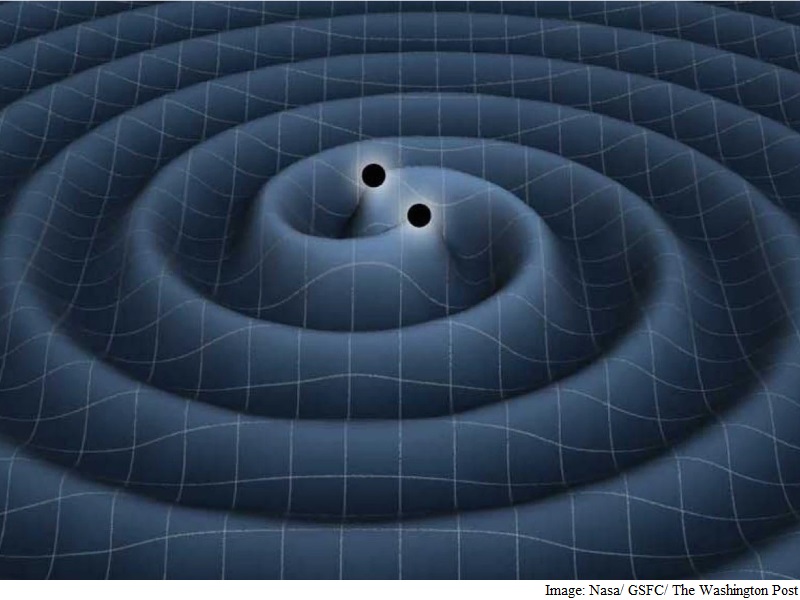 Gravitational waves produced by the collision of two black holes

Nothing in astronomy in 2016 topped the February announcement that the LIGO collaboration had finally detected gravitational waves. However this wasn't the only story in astronomy for 2016, and I've chosen nine others to accompany it.

The LIGO Scientific Consortium detected gravitational waves.
A century ago Einstein's theory of general relativity had predicted the existence of gravitational waves, ripples in space-time. The distortions created are so small that it would take a major cosmic gravitational event to register on LIGO's detectors. But their upgraded facilities detected the final seconds of a collision of two black holes that happened over a billion years ago. Scientists hope to be able to develop gravitational waves as a new tool in astronomy.

The Martian rover Curiosity found a mixture of mineral deposits on Mt Sharp that would have been ideal for hosting life.
Curiosity found boron, something we usually find on Earth where there had been ancient groundwater which then evaporated. (Death Valley is an earthly example.) In addition, other minerals found in the same location suggest a dynamic geochemistry. Planetary scientist John Grotzinger says “The more complicated the chemistry is, the better it is for habitability.” This isn't proof that there was ever life on Mars, but it's evidence that the conditions probably existed to make it possible.

Astronomers observed the weather on an exoplanet for the first time.
HAT-P-7b is a hot Jupiter, a planet bigger than Jupiter but so close to its star that it orbits in just over two days. The HATNet program at the Harvard-Smithsonian Center for Astrophysics first detected the planet, but many of the follow-up observations were from from NASA's Kepler telescope. And what is the weather likely to be? Cloudy with a temperature a terrifying 1900°C (3500°F).

The Juno spacecraft arrived at Jupiter.
Jupiter has a greater mass than all the other Solar System planets and moons put together. Yet although Jupiter's an essential element in understanding how the Solar System formed, there's much we don't know about it, including how its magnetic field is sustained. The Juno mission was designed to learn more, but being so close to Jupiter is dangerous. The planet's magnetic field accelerates subatomic particles to very high energies. The damage to Juno's instruments is minimized by a careful choice of orbit and by enclosing instruments in a titanium vault.

There was a transit of Mercury on May 9.
Transits of Mercury happen about 13 times in a century. When one occurs, Mercury is directly between us and the Sun. Through a telescope it's visible as a small black dot crossing the disk of the Sun. Scientists study the transits for various purposes, including monitoring the radius of the Sun, measuring the mass of Venus and helping to model exoplanet transits.

ESA released the first data set from its Gaia space observatory.
Gaia has been in orbit since January 2014. Its purpose is to carry out an extensive stellar census of a billion astronomical objects in order to create a precision 3D map of Milky Way objects and their motions. In September, a thousand days after Gaia's launch, the first data release occurred. Its main feature is the precise positions, distances and brightnesses of over a billion stars. This is the kind of data needed to understand, for example, Galactic evolution.

Pan-STARRS Sky Survey data release.
For four years the international Panoramic Survey Telescope and Rapid Response System (Pan-STARRS) repeatedly observed the sky visible from Hawaii at several wavelengths. It imaged stars, galaxies, and other space objects. It was looking for moving objects, and part of the survey was dedicated to searching for potentially hazardous asteroids. The survey is particularly useful because it includes the plane and disk of the Milky Way. These are often avoided because of the difficulties of photographing such dusty and densely populated areas. The mid-December release concentrates on the Static Sky, and there's more to come.

An international team discovered an enormous, but previously hidden, galactic supercluster.
The astronomers involved in the discovery call it the Vela supercluster. Superclusters are enormous collections of galaxies a few hundred millions of light years across. They're held together by their mutual gravity to form the most massive structures we know of in the Universe. The Vela supercluster may even be affecting the motion of the Local Group, the galaxy cluster of which the Milky Way is a member. If you wonder how something the size of a supercluster can hide, this one went unnoticed because it's behind the dense and dusty plane of the Milky Way.


You Should Also Read:
Gravitational Waves – What Are They?
Transit of Mercury
What Is a Galaxy