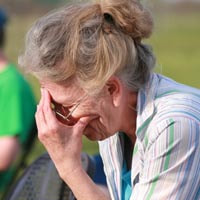 How do you prepare for important moments in life? Before my class reunion, I dieted, had my hair cut and high-lighted, and shopped for clothes. If I’m to give a speech or a talk, I’ll have practiced and prepared for weeks beforehand.

Benjamin Franklin said, “By failing to prepare, you are preparing to fail.”

When I know something important is going to happen and I want it to end well, I prepare in advance. Then there are often happenings in life that catch me off-guard.

Matthew 26
Before His crucifixion Jesus warned his disciples they would all leave Him. In response they all declared they would rather die with Him than run away.

Jesus led his band of followers to Gethsemane and told them to sit while He went to pray-to prepare for what He knew was coming. He told Peter, James and John, “Watch with me.” But when He returned, He found them sleeping. He told them “Watch and pray so you may not enter into temptation.”
Jesus went away again to pray. Later, when He returned they were asleep.
We all know what happened that night.( If you don’t, read Matthew 26.) The soldiers took Jesus. The disciples ran. Peter denied his Savior three times.
The men in the garden didn’t anticipate the horrors of what was coming. They’d been with Jesus and trusted He was capable of taking care of them. They loved Him and were confident they were ready for anything. They pledged to fight even to death. They didn’t know how those words would be tested.

They ran. They hid.

Abraham Lincoln said, “Give me six hours to chop down a tree and I will spend the first four sharpening the axe.”

Jimmy Carter said, “We should spend our lives as though Christ was coming this after noon.”


You Should Also Read:
3 Tips For Prayer
Answered Prayer - Conditional ?
Prayer With Friends in High Places