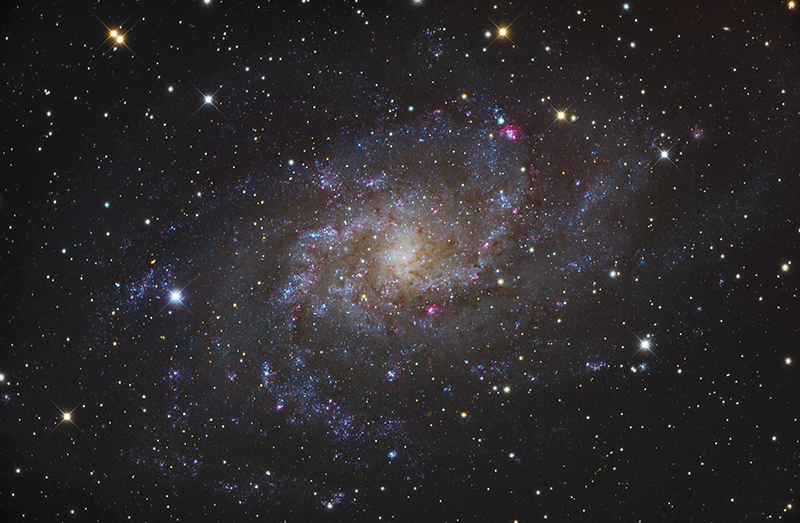 The sky is full of potential triangles. All you need is three stars that aren't in a line. We have large triangular asterisms – the Summer, Spring, and Winter Triangles. And there are also two triangle constellations. The northern one is Triangulum, and it has a surprisingly long history.

Three triangles
Triangulum, a small northern hemisphere constellation, was once accompanied by an even smaller triangle. In his 1690 atlas Firmamentum Sobiescianum, for reasons best known to himself, Polish astronomer Johannes Hevelius took three faint stars from Triangulum to make Triangulum Minus, then naming the original triangle Triangulum Majus. However, his rearrangement isn't part of the official constellations now in use.

In the southern hemisphere there's a second official triangle – the Triangulum Australe.

Ancient History
On the face of it, a triangle constellation is odd. It doesn't seem to make much of a story, and the three main stars of Triangulum aren't especially bright. Nonetheless the constellation's history goes back a few thousand years. In ancient Babylonian star catalogues, the triangle plus the star Gamma Andromedae – labelled γ on the star chart – made the constellation of The Plough. Its first appearance in the pre-dawn February sky was the signal to begin spring ploughing.

Babylonian astronomy was the foundation for Greek astronomy. The triangle – minus γ Andromedae – was part of it. At one time, it was named after the Greek letter delta: Δ. Later, many Romans associated it with Sicily because of the triangular shape of that island. Calling it Sicilia, they believed that the island's patron goddess Ceres had persuaded Jupiter to put it in the heavens. Second century astronomer Ptolemy included Trigonon (Triangle) among the 48 constellations in his star catalogue.

Beta Trianguli is a close binary. It consists of two stars too close together to see separately, circling each other every 31 days. The secondary star is similar to the Sun, but the primary is around seventy times as luminous and over four times as big. They're surrounded by a great dust ring, but there's no evidence so far of planets forming.

Alpha Trianguli, Triangulum's second brightest star, forms the apex of the triangle. Its common name, Ras al Muthallath, comes from the Arabic for the head of the triangle. Sometimes, instead of the Arabic, the Latin Caput Trianguli is used. In Babylonian astronomy it was described as “the seeder of the plough”.

A binary system, Alpha's stars take 1.7 days to orbit each other. They're closer together than Mercury and the Sun. The primary, whose official name is Mothallah, rotates so rapidly that it's egg-shaped like Gamma Trianguli. It's some thirteen times more luminous than the Sun, with a mean radius about three times that of the Sun. The secondary star is a red dwarf.

At least three of Triangulum's star systems have planets. Two of them are sunlike stars, one with two gas giants and another with one known gas giant. In addition, orange giant HD 13189 has a companion that takes 472 days to orbit. Its mass is between 8-20 times that of Jupiter, but it can't be determined closely enough to know whether it's a giant planet or a failed star known as a brown dwarf.

Deep sky objects
Triangulum contains an impressive selection of interesting objects, including 3C 48, the first quasar ever seen. What we now call quasars had once simply been radio sources. It was some years after its discovery that 3C 48 was identified as a quasar. A quasar is the highly luminous nucleus of a distant galaxy, probably powered by a supermassive black hole.

There are galaxies galore in Triangulum – spiral, elliptical, dwarf and more. An intriguing pair is NGC 672 and IC 1727, some 18 million light years away. Anglo-German astronomer William Herschel (1738-1820) discovered the barred spiral NGC 634 in 1786. Welsh astronomer Isaac Roberts (1829-1904) discovered the dwarf spiral IC 1727 a century later. Telescopes weren't yet good enough to distinguish their discoveries as distant galaxies. It took another century to realize that the two galaxies sometimes came close enough to each other to trigger star formation.

In 1784 William Herschel discovered NGC 604, an enormous stellar nursery. It's 1300 light years across, almost 100 times the size of the better known Orion Nebula.

The Triangulum Galaxy also contains the biggest known stellar mass black hole. This type of black hole is created by the gravitational collapse of a massive star. Triangulum's black hole, M33 X-7, has about 16 times the mass of the Sun.

You Should Also Read:
Johannes Hevelius
Death of a Massive Star
William Herschel