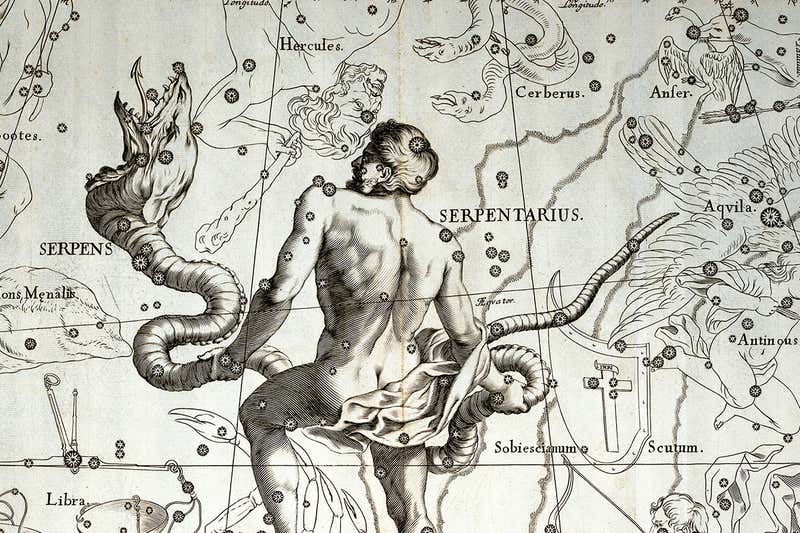 Ophiuchus the Snake Bearer represents the healer Asclepius who was a god of healing in classical times. He was associated with snakes – symbols of wisdom and regeneration – and in the sky he's entwined with Serpens. Here's a selection of some points of interest in his constellation.

Stars and planets
The brightest star in Ophiuchus is Alpha Ophiuchi. Its traditional name, and now official modern name, is Rasalhague. It comes from the Arabic meaning “the head of the serpent collector”. A binary star 49 light years from Earth, the primary is a white giant with over twice the mass of the Sun and 25 times its luminosity. It rotates so fast that it's like a spinning egg. The companion star is much smaller, with only 85% of the mass of our Sun.

There are over twenty stars in Ophiuchus with known planets, almost all of them gas giants. Yet some are of special interest.

In 2018 a planet was discovered orbiting Barnard's Star, a red dwarf star that's at least double the age of the Sun. It's six light years away, making it one of the closest stars to us, and named for American astronomer E.E. Barnard who first measured its exceptional proper motion. Proper motion is a body's motion across the sky, not the motion towards or away from us. Barnard"s Star has the highest proper motion of any star in the sky.

Barnard Star's planet, Barnard b, is a super-Earth, i.e., a rocky planet much larger than Earth. It orbits at the same distance from its star as Mercury does from the Sun. Yet since the red dwarf is much smaller and cooler than the Sun, the planet is at the snow line. This means that water freezes on the surface. Although Mercury is in sunward of our habitable zone, Barnard b is out beyond the habitable zone.

The only known three-planet system in Ophiuchus is that of Wolf 1061. It's 14 light years from us, and like Barnard's Star, a red dwarf. It has what may be three super-Earths, though Wolf 1061 d may be too massive to be a rocky planet.

Kepler’s Supernova was seen as a “new star” in the sky in 1604. Johannes Kepler wasn't the first to see it, but he observed it for a year and published his observations as De Stella Nova in 1606. The supernova was brighter than all the stars and planets in the sky, and could be seen during the day for several weeks. It was also the last time a supernova in the Milky Way could be seen by the unaided eye.

We now know that a supernova is a massive stellar explosion that usually leaves behind a neutron star and an expanding shock wave of nebular material. A nova, on the other hand, although it's an impressive explosion, doesn't destroy the star, so, like the star RS Ophiuchi, it can recur. To have a nova you need a white dwarf and a companion in close orbit. The dwarf pulls material away from the companion and when it reaches a certain mass . . . a thermonuclear bang! Six such eruptions have been observed at RS Ophiuchi since 1898.

Deep sky objects
Charles Messier discovered 6 globular clusters in Ophiuchus. A seventh, M107, was discovered independently by Pierre Méchain and by William Herschel. But It didn't appear in the Messier catalogue until 1947 when Canadian astronomer Helen Sawyer Hogg added it. These spherical clusters each contain hundreds of thousands of very old stars and are among the oldest objects in the Milky Way.

We can't see the misshapen galaxy NGC 6240 without an infrared telescope. Some 400 million light years away, two galaxies have collided and left this dramatic scene of star trails, breakneck star formation, gas and dust. Yet the galactic merger is not yet complete, for there are still two supermassive black holes and two galactic cores. [Image Credit: NASA, ESA, Hubble Heritage (STScI / AURA)]

Planetary Nebula M2-9 is breathtaking. A planetary nebula forms from the detached outer layers of a dying star. In this case, it was a binary star, and the interaction of the two stars created this bipolar nebula. It has several informal names, including Minkowski's Butterfly after the German-American astronomer Rudolph Minkowski who discovered it in 1947.

Our final destination takes us to the border of Ophiuchus with Scorpius and the Rho Ophiuchi Cloud Complex, a colorful sight.

When the visible light from a nearby hot star encounters the dust in the clouds, the red part of the spectrum isn't affected. But the dust scatters blue light, creating the blue reflection nebulae. The star Rho Ophiuchi is in the center of the blue nebula on the left. The red, on the other hand, is characteristic of an emission nebula, and that is created by strong ultraviolet light hitting the nebula's hydrogen gas. The hydrogen atoms emit red light. The red and the yellowish nebulae in the image are part of the constellation Scorpius. [Photo credit: Tom Masterson, ESO's DSS]

To find out more about Ophiuchus and Serpens, click on the links below this article.

You Should Also Read:
Serpens and Ophiuchus – Ancient Tales
Serpens – a Tour of the Celestial Snake
Do Red Dwarfs Live Forever