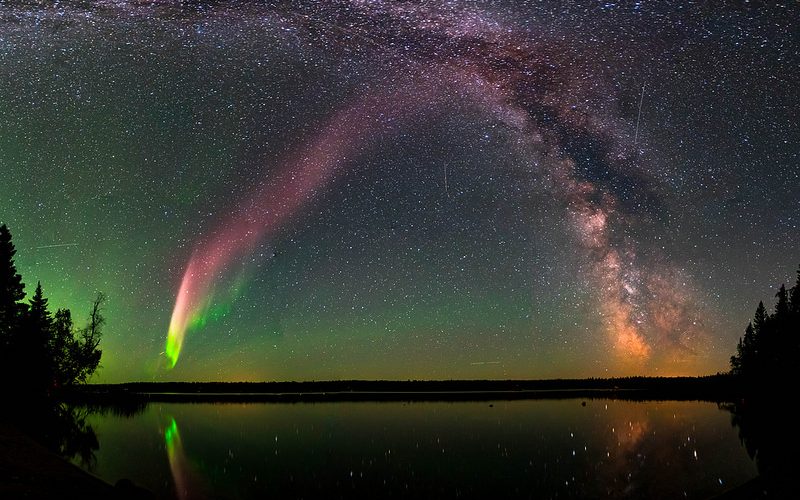 STEVE, a phenomenon that looks like an aurora, but isn't. [Credit: The Telegraph]

A mysterious purple arc across the sky, a shower of meteors, a rare transit, a Christmas comet – and more – complete the astro countdown to Christmas. Here are the days from mid-Advent to Christmas Eve.

Only a few of the days have picture links, but all the images are on the advent calendar thread of the Bellaonline Astronomy Forum.

13 There was a transit of Mercury in November 2019. Ryan and Addison Cowley got a splendid shot of both tiny Mercury and an aircraft in front of the Sun's disk. Although sunspots can make it difficult to find the transiting planet, there were no sunspots on this very quiet Sun.

14 The last full moon of the year was on December 12th at 05:12 UTC (Coordinated Universal Time). The local time for Angela Demetriou McClain in Virginia, USA, was 12:12 a.m. on 12/12/2019, which is when she took her photo of the Moon. But for those living in time zones westward of Virginia, the full moon happened on December 11. And for anyone living in her time zone, but using a 24-hour clock, the time would have been 00:12.

15 The Geminid meteor shower is one of the year's best. Jack Fusco photographed it in Jasper National Park in Canada. In one of his exposures he caught a breathtaking fireball and three fainter meteors above the frozen landscape.

16 In June 2019 Juno passed Jupiter at just 15,000 km above the cloud tops. Dark features tend to be deeper than lighter colored ones, so the dark feature in this image could, in fact, be a deep hole in the clouds. No one knows, but astronomers have nicknamed it "The Abyss”. [Image: NASA, Juno, SwRI, MSSS; Processing & License: Gerald Eichstadt & Sean Doran]

17 A natural color view of the moon Dione seen against the background of Saturn provides an interesting contrast. The Cassini-Huygens probe took a number of pictures at a distance of about 603,000 km from Dione. From these, a composite photo showed Saturn in lovely warm tones, but although Dione has strong variations in brightness, it has no color to it.

18 Few exoplanets have been imaged, and the results are fuzzy. However, artists can use the available data to make pictures that give us an idea of what the planets might be like. Adam Makarenko takes it a step further and creates models. He's done a series of them for Keck Observatory's Exoplanet Imaginarium, including the first exoplanet discovered by the observatory.

19 The Square Kilometre Array (SKA) is the world's biggest telescope array. It's located on two sites, one in Australia and the other in South Africa. Bringing together South African and Aboriginal Australian artists, the Shared Sky exhibition was born. A collaborative painting from Aboriginal Yamaji Artists from Western Australia [left] and a collaborative quilt from South African indigenous artists [right] were part of it. [Left: © 2014 Yamaji Art Centre. Right: © 2014 Bethesda Foundation.]

20 In January 2016, photos were released of the first flowers grown in space – Zinnias on the International Space Station (ISS). The Veggie system contained zinnia seeds, but the astronauts didn't just rely on the hardware. Scientists were interested in plant responses to microgravity, yet practically speaking, if astronauts are to undertake deep space missions, they need to learn how to be gardeners.

21 The Royal Observatory Greenwich, England is the place where time begins. It was founded in 1675 by King Charles II. In 1884, the International Meridian Conference in Washington, DC voted to adopt the Greenwich meridian as 0° longitude, the international Prime Meridian.

22 Chris Kotsiopoulos braved “rough and slippery terrain, cows blocking the narrow footpath and three intense rain storms” to record Sun positions on a day near the December solstice. His photos show the path of the low December sun at Lulworth Cove on the Jurassic Coast of Dorset, England. The December 2019 solstice occurred at 04.19 UTC on the 22nd. (UTC = Greenwich Mean Time) This was when the Sun was directly above the Tropic of Capricorn.

23 The header image shows “Steve” (the name inspired by an animated comedy film where it meant something unknown). It's a sky phenomenon that looks like an aurora, but isn't one. Aurora-watchers have been seeing Steve for centuries, but it's only recently been studied. It's even got a backronym: Strong Thermal Emission Velocity Enhancement. It's a very narrow purple arc extending for hundreds or thousands of miles, aligned east–west. Steve is accompanied by aurorae, but unlike an aurora, Steve is not caused by charged particles from the Sun interacting with Earth's atmosphere.

24 The lovely green “Christmas Comet” – 46P Wirtanen – made a close approach to Earth in December 2018. Tommy Eliassen photographed the comet in a starry sky above a magnificent pine tree covered in snow in Bleikvassli, Norway. The image was shortlisted for the Astronomy Photographer of the Year 2019.