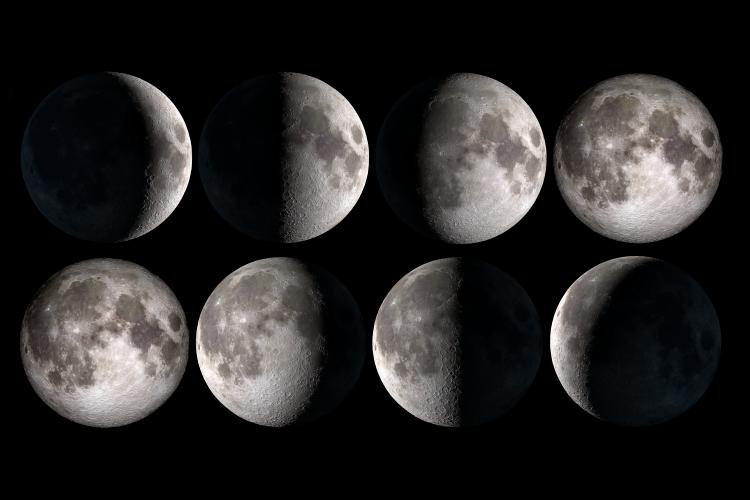 The Moon has always been our celestial companion, lighting the night, its changes serving as a calendar. What is it, where did it come from, why do we only see one side of it, what's our future together?

The Moon
Earth has one natural satellite, a rocky body rounded by gravity. It was unique in human experience until the 17th century when Galileo discovered that Jupiter also had satellites. Our satellite is the Moon in English, but from the Latin luna comes lunar to refers to the Moon, and lunatic from when people thought the Moon's changes could affect the mind.

Moon phases
Having no light of its own, the Moon is only visible by reflected sunlight. As it orbits, the Moon seems to change shape as we see the sunlit side from different angles. The apparent changes are the phases of the Moon. It takes 29.5 days to go from new moon to new moon, a time period known as a lunation or lunar month.

Birth of the Moon
There have been many ideas about how the Moon formed. The current most widely accepted one is that in the chaotic Solar System of 4.5 billion years ago, a Mars-sized object hit the young Earth. That sent a shower of debris from both bodies into space. Over time, gravity pulled much of the Earth's matter back together, also incorporating material from the impactor. The rest of the debris orbited the Earth until it amalgamated to form the Moon. This is the giant impact theory.

Earth-Moon system
The Earth and the Moon aren't just neighbors. Together they're a system of mutual influences, notably through gravitational effects. The twice daily tides caused by the Moon slow Earth's rotation. Ancient fossil evidence shows that days were shorter long ago. And the day continues to lengthen – but only by two milliseconds a century.

Although the Moon doesn't have oceans, tides pull on the land and cause faulting in the crust. In addition, the Moon's rotation has slowed so much that the time it takes for one orbit is the time taken to turn once its axis. The effect is called a tidal lock, and it's why we always see the same side of the Moon.

Eventually – and we're talking billions of years from now – the Earth's rotation will stop and the same side of both the Earth and the Moon will always face each other.

How far away is the Moon?
Since the Moon's orbit isn't circular, its distance can vary by up to 50,000 km (31,500 mi). The average Earth-Moon distance is 384,400 km (238,855 mi). The closest point is called perigee and the most distant is apogee. A media extravaganza often accompanies a full moon at perigee, which they call a “supermoon”, even though it looks much the same as any other full moon. [To find out more, follow the link below this article.]

The far side
Some people call the unseen side of the Moon the dark side, but there is no permanently dark side. On the Moon, a day is a lunar month long with two weeks of daylight and two weeks of darkness. The hemisphere we can't see from Earth is the far side.

Our first glimpse of the Moon's far side was in 1959 when the Soviet spacecraft Luna 3 sent back photographs. Nine years later the crew of Apollo 8 were the first humans to see it with their own eyes.

Far side vs near side
The far side was a surprise. It doesn't mirror the near side whose extensive dark areas form striking patterns. The dark areas are maria, Latin for seas, which is what 17th century astronomers thought they were. But on the far side the surface is almost exclusively light-colored, thickly cratered terrain.

The South Pole-Aitken basin, circled in grey, was also found on the far side. It's one of the biggest impact basins in the Solar System. The map is topographic with red being high elevation and purple low elevation. The Moon is only 11,000 km (6800 mi) around, and the impact basin is 2500 km (1600 mi) across.

The first spacecraft to land on the far side of the Moon was the Chinese spacecraft Chang'e 4. It landed in January 2019 in a smooth region of the South Pole-Aitkin basin.

Maria
An early period of intense bombardment left large craters on one side of the Moon. There were never any seas, but molten rock breaking through the lunar crust filled the craters with lava that hardened into dark rock. Samples returned by Apollo astronauts show that it's basalt but with detectable differences to Earth basalt. In contrast to the many craters, the maria are smooth areas which made good landing sites for the first Apollo missions.

But why maria on one hemisphere and not the other? Gravitational measurements taken by lunar probes show that the lunar crust is thicker on the far side, so it would be more difficult for magma to break through it. But why is the crust is thicker there? We don't know.

Weather? Water?
With just over 1% of the mass of the Earth, the Moon's gravity is a sixth that of the Earth. That isn't enough to hold an atmosphere or surface water. But the Moon turns out not to be “as dry as a bone”. There is now considerable evidence of frozen water in deep craters that are in permanent shadow. It was probably deposited by comet or asteroid impacts.

The Moon's crust has faulting caused by tidal effects, and some moonquakes which aren't yet understood. Surface weathering occurs from impacts and extreme temperatures. Overall, It's very calm compared to Earth's dynamic interior and dramatic weather. Neil Armstrong's famous footprint could remain undisturbed for a long time.

You Should Also Read:
What Is a Supermoon
Water on the Moon
Moon Madness