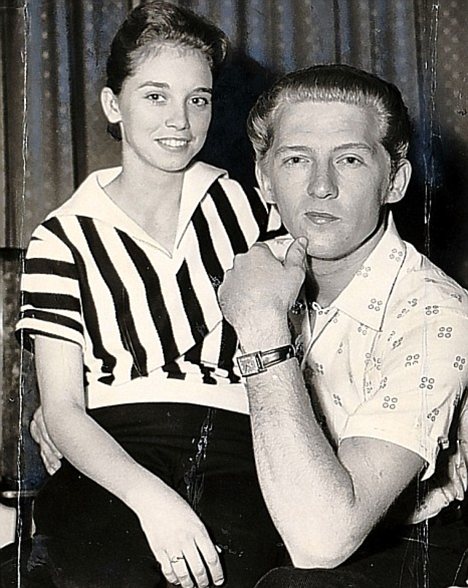 From the early days of Rock & Roll to present day, it seems as if controversy and scandal have plagued the music as well as its legendary stars. Jerry Lee Lewis, also known as “The Killer, became a trailblazer for Rock & Roll when he hit the scene in the 1950s. Noted for his flamboyant piano playing, Lewis rose to the top of the charts with 1957’s “Whole Lotta Shakin’ Goin’ On” and it’s follow-up “Great Ball Of Fire”. He seemed to be on the road to rivaling the popularity of Elvis Presley.

At 22-years-old, Jerry Lee Lewis had already been married twice before when he married Myra Gale Brown on December 12th, 1957. In May 1958, Jerry Lee was scheduled for an unprecedented tour of the U.K., something his fellow musicians had dismissed. Despite management’s misgivings and advising him not to take Myra, Jerry Lee insisted on bringing her along on the overseas trip.

Jerry Lee Lewis and his entourage arrived at Heathrow Airport in London, England on May 22nd, 1958, Myra was approached by Ray Berry, a member of the British press. Berry questioned who she was and when Myra answered, scandal ensued. Myra not only admitted to being Jerry Lee’s wife but also claimed to be only fifteen years old! The press jumped on the news and when the truth finally came out, not only was it revealed Myra and Jerry Lee were indeed married, but teenage bride was in fact only thirteen years old and the pair were cousins (once removed).

The controversy over this scandal caused irreparable damage to Jerry Lee Lewis’ once bright career. The singer was forced to cancel his British tour after three performances. Once back in the U.S., he soon realized the news had spread there as well. TV performances were cancelled and Lewis, who had once commanded $10,000 a night for performances in large concert halls was now garnering just $250 for singing in bars and clubs.

While his career never fully recovered from the scandal, Jerry Lee Lewis has continued singing, recording and playing piano, venturing out into rockabilly and even country music with hit songs like “Another Place, Another Time”. His 1964 “Live at the Star Club Hamburg” that he recorded with the Nashville Teens is considered to be one of the greatest live recordings of all time. His life and career would also be the focal point of the 1989 movie “Great Balls of Fire” starring Dennis Quaid and Winona Ryder.