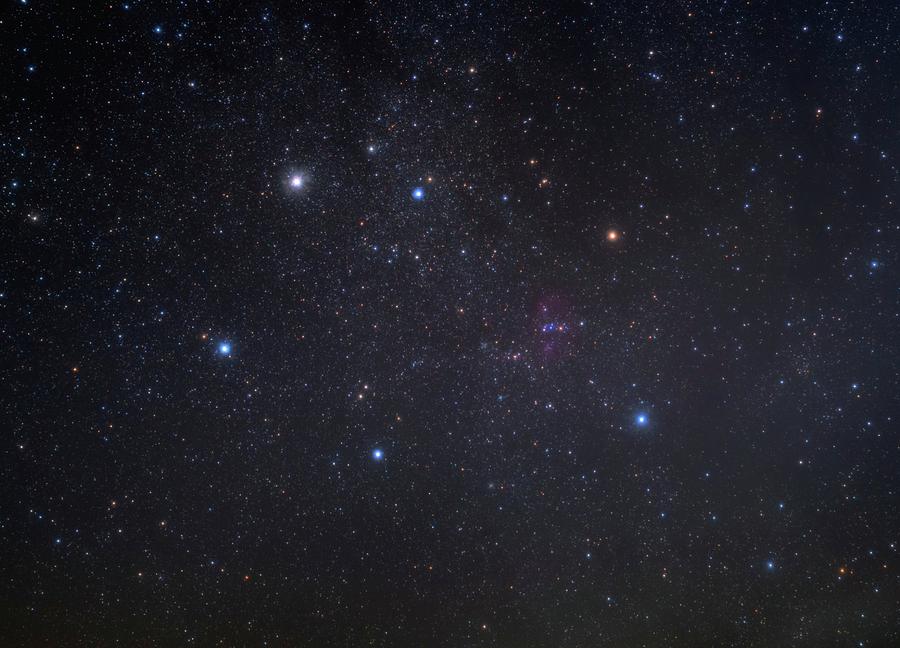 The Charioteer races across the northern winter skies past Orion and Taurus the Bull. It's a constellation that's easily recognizable by its ring of bright stars that includes Capella, the sixth brightest star in the sky.

Auriga has represented a charioteer for thousands of years, even though he has no chariot. An early 19th century picture from Urania's Mirror is typical in showing nothing more than the reins in the charioteer's right hand.

Ptolemy (c.98-c.168 CE) described Auriga in his work Almagest, and the constellation was ancient even then. There are various myths associated with it, a prominent Greek one being that the charioteer was none other than the legendary Erichthonius. He was the son of the god Hephaestus (Vulcan to the Romans) and raised by the goddess Athena. Erichthonius was lame, but known for his exceptional skill in training horses, and the first – save for Apollo himself – to drive a chariot pulled by four horses.

In the picture from Urania's Mirror the charioteer, although lacking a chariot, is holding a goat and two kids. Mythology doesn't seem to connect the charioteer and the animals. However the goat is the star Capella (a name meaning little she-goat), which is also the charioteer's left shoulder. Capella is associated in mythology with Amalthea who suckled the infant Zeus. Two stars, Eta Aurigae and Zeta Aurigae, are the Haedi (kids). Some sources put Epsilon Aurigae as a third kid, but this star represented the charioteer's left elbow.

Bright Menkalinan (Beta Aurigae) is the charioteer's right shoulder. Although it looks like a single star, it's actually a triple star system. Two of the stars are bigger, hotter and brighter than the Sun, and they orbit each other closely enough for their mutual gravity to pull them both out of shape. The third star is a faint red dwarf which orbits them at about 330 AU (330 times the Earth-Sun distance).

If a triple star system is unusual, what about a quadruple one? Beautiful yellow-white Capella turns out to be two pairs of binary stars. The bright pair, Capella A and Capella B, are yellow giants which give Capella its color. They orbit each other more closely than the Earth and Sun. However, 10,000 AU away, Capella A and B are circled by a pair of faint red dwarf stars.

Perhaps you noticed a star in the photograph which was labelled as Beta Tauri. It looks like it's part of Auriga and indeed it once was the charioteer's foot (designated Gamma Aurigae). At the same time, it was also Beta Tauri, the tip of one of the bull's horns. When the International Astronomical Union rationalized the constellations, they divided up the entire sky with no overlap, so everywhere was uniquely described. Decisions had to be made and in this case, Taurus kept his horn and Auriga lost a foot. (Since Erichthonius was lame, perhaps this was appropriate.)

The Milky Way with its rich star fields runs through Auriga. There are three notable star clusters, Messier objects M36, M37 and M38, and they are visible through binoculars. They were catalogued by comet hunter Charles Messier in the 18th century.

Auriga also contains a runaway star – AE Aurigae is moving much faster than the other matter around it. It was ejected from its birthplace in the Orion Nebula two million years ago and is currently resident in the Flaming Star Nebula (IC 405).

Our final object was dubbed Auriga's Wheel when it was discovered in July 2011. It's a ring galaxy that was discovered in a sky survey photograph, so there is only a tiny picture of it. However here is a picture of Hoag's Object, another ring galaxy. These rare galaxies may be created when a smaller galaxy passes through the center of a larger one, but they are something of a puzzle for astronomers.

You Should Also Read:
What Are Constellations
What Is a Nebula
Orion the Hunter