On The Record - Pat Benatar 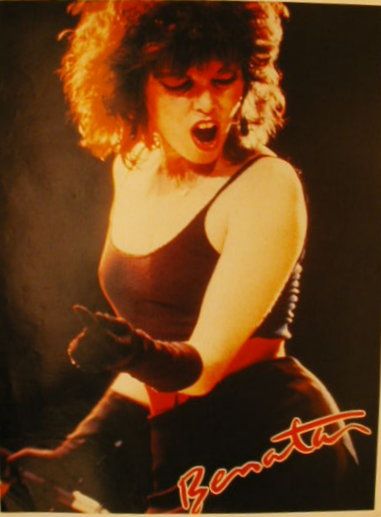 In the Heat of the Night
Pat Benatar’s first album was released on August 27th, 1979 on Chrysalis Records. The record reached number 12 on the U.S. charts, selling over a million copies, with the singles “Heartbreaker” and “We Live for Love”.

Crimes of Passion
Chrysalis released Benatar’s second album on August 5th, 1980. With the success of such songs as “Hit Me With Your Best Shot” and “Treat Me Right”, the album would reach number 2 on the Billboard charts, staying there for five weeks. It would go on to sell over five million copies.

Precious Time
Benatar’s third album would go on to two million copies and reached number one on the charts. Released on July 6th, 1981, the song “Fire and Ice” from the album would garner Benatar the Grammy Award for Best Female Rock Performance.

Get Nervous
Released on October 29th, 1982, “Get Nervous” peaked at number four on the Billboard charts. The album included the hit song, “Shadows of the Night”, which would win Benatar another Grammy award. The album would go on to sell over a million copies.

Tropico
Pat Benatar’s fifth studio album was released on November 1st, 1984. Featuring the hit song “We Belong”, the album reached number 14 on the Billboard charts and sold over a million copies.

Seven the Hard Way
“Invincible” was the hit song from the album “Seven the Hard Way”. Benatar’s sixth studio album was released on October 30th, 1985 and reached number 26 on the Billboard charts. The album was certified gold, selling over 500,000 copies.

True Love
The blues inspired “True Love” was released on April 27th, 1991. The album would sell just under 500,000 units to date and would reach number 37 on the Billboard charts.

Gravity’s Rainbow
Benatar’s next rock album, “Gravity’s Rainbow” was released on May 24th, 1993. Peaking at number 85 on the charts and selling just under 200,000 copies, the album would be her last venture with Chrysalis records.

Innamorata
Benatar’s tenth studio album was released on June 3rd, 1997 on the CMC International label. It charted at number 171 on Billboard and has sold just under 70,000 copies.