The Discovery of Dord 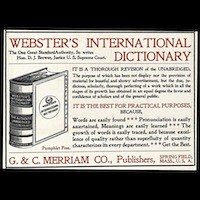 I was reading the dictionary one day when a short entry on page 771 stopped my finger mid-scroll. “Dord,” it proclaimed, “(dôrd), n. Physics & Chem. Density.”

Density? Dord? That’s not even a word!

OK, that’s not a true story. I mean, it’s true dord isn’t a word, but I didn’t find it in the New International Dictionary, 2nd edition – I wasn’t born yet then. It’s also true that I used to love reading the dictionary, though I never did uncover a nonexistent word. However, someone at what is now Merriam-Webster did on February 28, 1939. The name of this dictionary detective is lost to history, but that actually befits dord, which spent 13 years in the English language before finally making a quiet exit. As far as we know, no physicists or chemists ever used it.

So how did dord even enter Webster’s hallowed pages? Philip Babcock Gove, editor-in-chief of the 3rd edition, explained it all in “The History of Dord,” published in the journal American Speech in 1954.

Back in the day, lexicographers added words to the dictionary by typing them on 3-by-5-inch entry slips. By 1931, the 1st edition of the New International needed to be updated, and chemistry editor Austin M. Patterson sent in a slip with these words:

“No etymology, no examples of the word in use,” Emily Brewster describes in a video on the Merriam-Webster site. That probably should have given the next editors a heads-up, since every entry must have an origin and a usage example. So why didn’t this one? Because it was supposed to continue an existing list (hence the note “cont.”) – a list containing all the words that can be represented by letter D. It was an entry for the abbreviations section of the dictionary: D, or d, stands for density. The problem was, entries had to be typed with spaces between each letter so that, somewhere down the line, stress marks and syllable breaks could be penciled in. So the next editor mistook the whole thing for a word, and the one after that added a logical – though unresearched – pronunciation: “(dôrd).” Rhymes with ford.

The etymologist, somewhere in that process, was quite clearly asleep on the job.

So it was that, in 1934, dord entered the English language. No one probably ever looked it up … because there was no such word. Five years later, an unknown staff member read the dictionary for unknown – but I’m sure very good – reasons. Unmasking the imposter, this person decoded the original entry slip and immediately sent in a correction slip with the explanation and a few exclamations: “A ghost word! Plate Change (Imperative! Urgent!).”

What’s a ghost word, you ask? Webster’s dictionary – or any dictionary, really – defines it as a word published in a reference book but never used. You’re probably thinking: Well, that describes most words! After all, today’s New International lists almost half a million words and, by many accounts, the average American adult uses only 20,000 – not even half a percent.

However, ghost words are not just words you don’t use; they’re words that “have no meaning whatever,” said Walter Skeat, the linguist who coined the term in 1886. They’re mistakes created from real words that somehow got through the publishing pipeline. Half a dozen examples regularly turn up in a Google search, but dord is the most entertaining one. I mean, even after it was corrected in reprints, dord stuck around for seven more years. A third slip can be seen in the Merriam-Webster video, sent in 1947 and bearing the stern note:


Mr. O:
Although a plate change was ordered in 1940 (deletion of this entry) it still appears in books that we have. Please give this entry special attention for plate change.

How did Mr. O allow dord to linger? Well, the printing plates were changed and the correction made in the New International, but Merriam published a lot of dictionaries – it still does. The bestseller is the Collegiate, but there’s also the Compact, the Pocket, the Desk and a dozen others, according to its online shop. (In fact, the company doesn’t own the copyright or trademark for the Webster name, so anyone can publish a reference book called a Webster’s dictionary. But that’s a story for another day.) So it was only in 1947 that dord was finally removed from all of Merriam’s books. The ones before then are now collectors’ items.

In contrast, some mistakes not only made it into the English language, but gained widespread use afterwards. These include gravy and tweed, says Mignon Fogarty, a.k.a. Grammar Girl on QuickandDirtyTips.com. She describes how a 15th-century scribe misread a couple of 1,600-year-old works by the philosopher Cicero, who referred to things called sittybas. This was Greek for “title-slips,” the labels of books or parchments. The scribe wrote it as syllabus, which some people thought came from Latin because Cicero was Roman. Two hundred years later, such people made up a Latin plural: syllabi. Not a word.

OK, yes, it is now. Still, it was totally made up from a nonexistent word – a ghost word that became real. From now on, you might want to start saying syllabuses. And, while you’re at it, see if you can bring dord back to life.


You Should Also Read:
Cocktail Word Origin
Have Fun with Word Games and Quizzes
7 Reasons You Aren't Fun