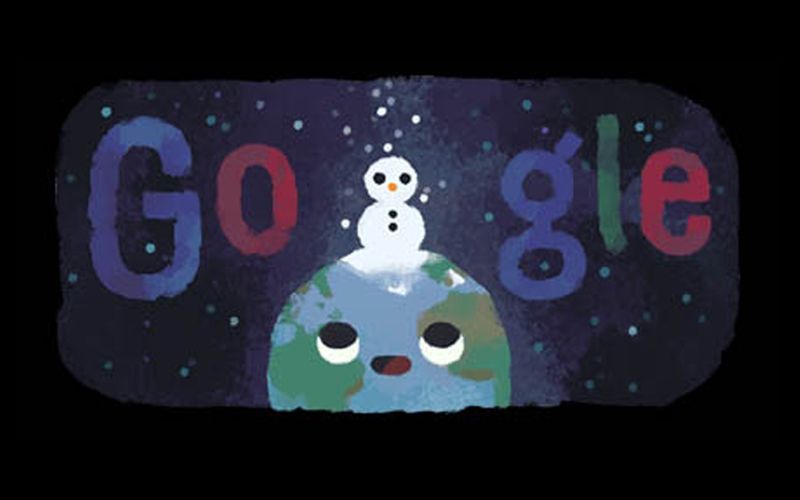 Google celebrates the winter solstice with a doodle.

The winter solstice has been celebrated for thousands of years and is probably the astronomical event most often associated with a festival. Let's see what the solstice is and some of the celebrations that surround it.

The Earth tilts
The Earth turns on its axis to give us alternating day and night. The axis isn’t straight up and down, but tilted 23.5 degrees with respect to our path around the Sun. As Earth orbits the Sun, the axis continues to point in the same direction. This is why we have seasons, and the number of daylight hours changes during the year.

There are two annual solstices. They occur when one pole’s full 23.5-degree tilt is towards the Sun. In December it’s the south pole, giving the southern hemisphere its longest day. Since the north pole is then tilted the full amount away from the Sun, the northern hemisphere has its shortest day. In June the opposite occurs. The northern winter solstice is usually on the 21st or 22nd, which is the first day of winter.

Why celebrate winter?
No one celebrated winter itself, a harsh season, cold and dark. Game was scarce and so was food to forage. Crops weren’t growing and survival depended on what was preserved and stored. Starvation before spring came was always a threat.

It’s easy to imagine why the Sun was considered a god in so many cultures, for life on Earth depends on it. By December, for six months each day had been shorter than the last, and the Sun hadn't risen as high. Would this continue until the life-giving Sun disappeared altogether?

A formal ritual might either encourage the Sun’s return or thank him for returning. It would also bring the community together and strengthen it for the lean months to follow. If spring is the renewal of the natural world, the winter solstice is the renewal of the Sun. In many cultures it’s the New Year.

There is archaeological evidence for the importance of the winter solstice to ancient peoples. For example, over four thousand years ago a Neolithic culture in Ireland built

You Should Also Read:
Why Planets Have Seasons
Christmas in the Skies
Summer Solstice - St John's Day