Why Planets Have Seasons 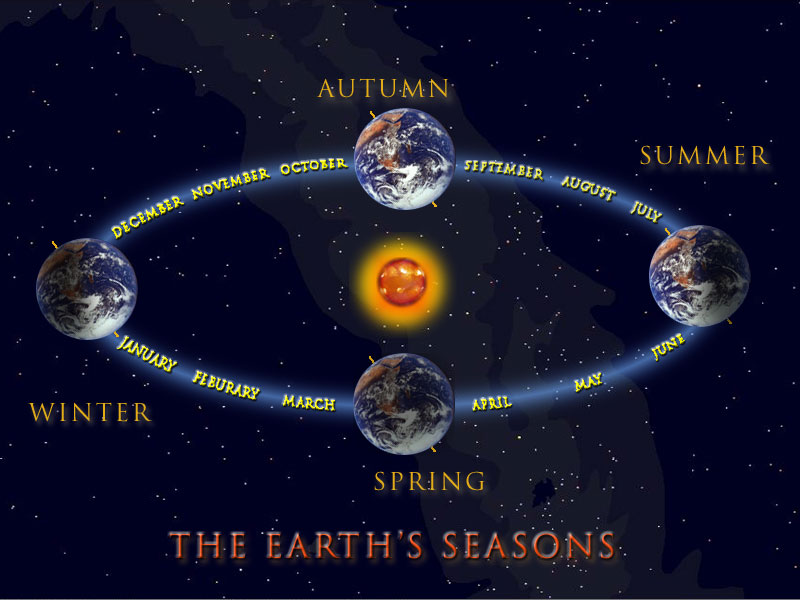 If you live in a temperate zone, you're used to the idea of four seasons marked by changes in day length and temperature. But as we move towards the poles the day lengths become more extreme, culminating in summer days when the Sun never sets and winter days when it never rises. By contrast, equatorial seasons are based on rainfall patterns since day length doesn't vary much.

Although we now understand the principles underlying the changes in day length, people have been aware of the pattern of changes for thousands of years. One lovely example of the archaeological evidence is in one of the Loughcrew Cairns in Ireland which is about five thousand years old. Deep inside are beautifully decorated stone carvings illuminated by sunlight only around the March and September equinoxes. [Image: Alan Betson]

Earth, like other rotating bodies, turns on its axis. It's as if it were spinning on a giant pole fixed through the center. At the same time, Earth is going around the Sun in a path called the ecliptic.

We have seasons because Earth's axis is tilted. It doesn't point straight up from the ecliptic. If it did, day length at any latitude would be the same all year round. However Earth's axis tilts about 23.5 degrees to the ecliptic - Mars, Saturn and Neptune have similar tilts. The direction in which the axis points doesn't change as the planet orbits the Sun.

At one point in our orbit the full 23.5° tilt of the North Pole is towards the Sun. That is the June solstice when the Sun is at its highest in the northern sky, and within the Arctic Circle it doesn't set. Since the hemispheres are affected oppositely, it's the southern hemisphere's winter solstice.

As Earth continues its journey after the June solstice, northern hemisphere days gradually shorten and southern hemisphere days lengthen. Three months later there is an equinox (meaning "equal night"). The equinoxes happen on March 20 and on September 22 or 23. Around these times everywhere on Earth will have a calendar day in which day and night are of equal length.

The solstices and equinoxes are now often referred to by the month in which they occur, removing the necessity to explain which hemisphere is under discussion. Traditionally, one equinox is known as the Spring or Vernal Equinox and the other the Fall (Autumnal) Equinox.

There is, by the way, no universal official start and end to seasons. Not only does it vary between cultures, but the meteorological seasons differ from the astronomical ones.

Astronomical seasons begin on the solstices and equinoxes, so, for example, northern hemisphere summer is from June 21 to the September equinox. Meteorological summer however is based on temperature.

Although the northern hemisphere gets the most direct sunlight in May, June and July, much of the heat goes to warming the oceans. This causes a temperature lag, making June, July and August the hottest months and corresponding to meteorological summer.

Interestingly, Earth's orbit is not quite circular, so it isn't always at the same distance from the Sun. However we're actually closest early in January, in the midst of northern winter.

But imagine what seasons would be like if Earth were tipped on its axis like Uranus, orbiting practically on its side. At the solstices, one hemisphere is bathed constantly in sunlight and the other completely dark. Nonetheless at around -365°F (-220°C), it's far from balmy at any season.

You Should Also Read:
Ecliptic and Equinoxes
Halloween
Groundhog Day