Well, OK, the fire wasn’t raging through our dorm or anything, but the alarm went off sometime after midnight, so it certainly was not a drill. I’m such a heavy sleeper that my roommate had to shake me awake. When I opened my eyes, it sounded like the alarm was right inside our room, but I’d heard absolutely nothing in my sleep.

Samuel S. Applegate’s invention wouldn’t have helped me, but it might have spared me later in life from several embarrassing incidents of oversleeping. Ingenious alarm clocks have been around since at least Plato’s time in the 4th century BC, but they all relied on sound to wake people up. What about the heavy sleeper who showed up late to the Academy every morning? Plato wasn’t too happy with him, I’ll bet.

By 1876, Seth E. Thomas of Connecticut had invented the wind-up alarm clock, but Applegate, a resident of Camden, New Jersey, pointed out that “a person in time becomes so accustomed to the noise that sleep is not disturbed when the alarm is sounded.” That’s what he wrote in his patent application for a contraption called “Device for Waking Persons from Sleep.” He received U.S. Patent No. 256,265 on April 11, 1882. 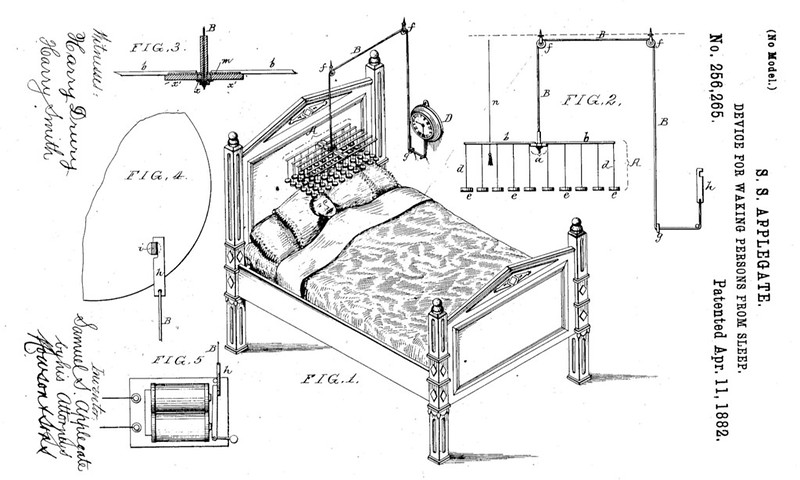 What a Rube Goldberg machine! The patent papers, which include the above illustration, can be viewed on the U.S. Patent and Trademark Office website. The idea was, a small rectangular plate would be attached to the clock’s wind-up mechanism, and when the alarm rang, the plate would be released and thus activate the main part of the apparatus: a wooden frame suspended above the sleeper. What are those small objects hanging from the frame? Sixty corks. These could be replaced with 60 tassels or pieces of cotton gingham, as long as they were hung on a frame as depicted. “When it falls,” Applegate explained, “it will strike a light blow, sufficient to awaken the sleeper, but not heavy enough to cause pain.” You can see why no one wanted to construct this thing.

To be fair, Applegate clarified that the frame would “not come into contact with the sleeper’s face.” Rather, the plate (labeled h in the drawing) would stop at a ring (labeled g), so the frame would only drop down a bit, allowing the corks to lightly pummel the sleeper’s face. I appreciated the ingenuity of this, but then Applegate added: “Provision may be made for turning on and lighting the gas in the room at the same time that the sleeper is awakened.” Definitely one idea too far.

So it was back to the drawing board for inventors who cared about heavy sleepers. In 2005, James Thomas Stevens imagined an improvement on Applegate’s apparatus: spray water on the sleeper’s face instead! Stevens’ drawing, which can be viewed on Google Patents, looks uncannily like Applegate’s.

By that time, though, Gauri Nanda had come up with Clocky, which took the gadget-gaga world by storm the following year. That’s because Clocky is a cute little thing: a $40 alarm clock on wheels. “If you snooze,” explains the Nanda Home website, “Clocky will jump off your nightstand, and run around beeping, absolutely determined to get you out of bed on time.” Now that’s ingenious … if somewhat irritating. A Harvard Business School article quotes Diane Sawyer as saying, “I would kill Clocky in about two days.” No doubt she would do the same to Tocky, which plays your favorite tunes as it tries to get away from you.

If you’re willing to spend 10 times as much, you can even get the Bedjet v2, which blows cool or warm air onto your mattress all through the night. Program it to turn up the warmth gradually in the morning, and your body’s internal clock will purportedly be convinced that it’s time to wake up.

Of course, there are much cheaper ways not to oversleep in the first place. One study, published in Science Translational Medicine on Sept. 16, 2015, found that drinking the equivalent of a double espresso three hours before bedtime sets the body’s circadian rhythm back 40 minutes. So the solution for heavy and light sleepers alike is actually simple: save a few bucks at the café, and you should wake up the next morning at the just right time.


You Should Also Read:
Help! My Teen Cannot Wake Up In The Morning
Awaken to Life with Daily Rituals
Germany's Cuckoo Clocks And The Black Forest