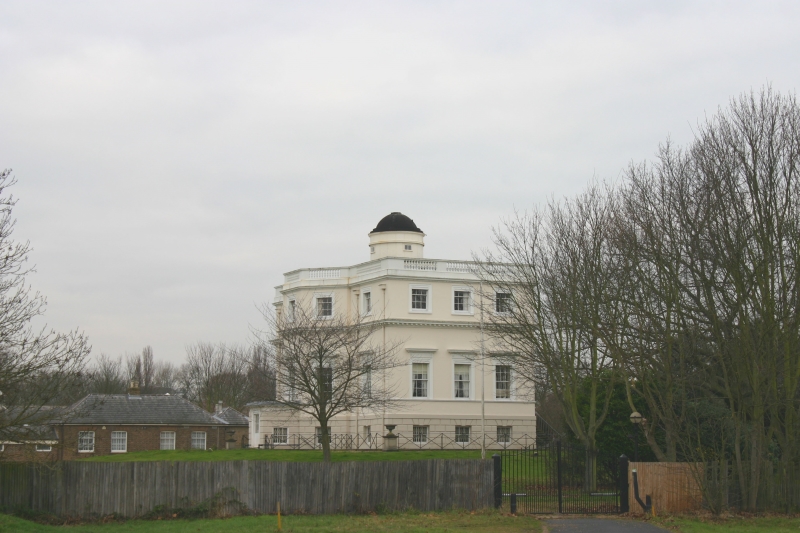 Around the world, astronomers were preparing for a rare astronomical event: a transit of Venus on June 3, 1769. Venus would cross in front of the Sun that day and not again for 105 years.

Dr. Stephen Demainbray, friend and family tutor of King George III, told the King about the transit. As a keen amateur astronomer, George wanted to see it. The royal summer residence in Kew had an observatory, but it was no longer usable, so the King decided to build a new one.

The King's Observatory
Sir William Chambers (1726-1796) designed the observatory which was built in the Old Deer Park in Richmond. Except for the movable telescope dome on top, the observatory looked like a villa. [The header image is a modern photo of the building by Lee Macdonald.]

A decade after the observatory was built, three obelisks were laid out in the grounds as meridian markers to help in adjusting the telescopes.

Transit of Venus 1769
On the big day, Demainbray set up the instruments and timed the observations. The royal family was present in force, as well as a number of other people such as the King's clockmaker.

Unfortunately, when viewed through a telescope Venus seems to stretch out a bit, so it's hard to tell when contact is made. This means the timings can't be precise, so even people in the same place won't see it at the same time. The timings at Greenwich, for example, differed from each other by a whole minute, though those from Kew differed by only a second. Was this due to superior observation at Kew or, as John Butler suggests, “It must have been difficult to disagree with the King.”

Kew Meridian
After the transit, the King's collection of scientific instruments was housed in glass-fronted cabinets in the observatory, as was the Queen's natural history collection. The royal children also got science lessons there from Demainbray's son, who was himself to be the King's Observer for nearly sixty years.

But it wasn't just a spare room for the royal family. For many years the King's Observatory used the Kew Meridian to calculate official time for the Houses of Parliament and other institutions. The time was kept accurate to the second by daily observations of the Sun as it crossed the meridian. The Kew Meridian is now identified by a steel marker along the Thames towpath between Richmond and Kew.

Murder most foul
Murder in an observatory is sometimes the stuff of fiction, but the King's Observatory may have had a real one. At the very least, it had a double murderer working as a porter. John Little seemed a quiet and congenial man and was often the only one in attendance when the King walked in the garden.

However on June 23, 1795, he used a rock to beat to death a 72-year-old man to whom he owed money and the man's 60-year-old housekeeper. Following their cries, neighbors rushed to the house and found Little hiding there. A court convicted him of the killings and he was hanged. For some reason they didn't accept his story of self-defense.

An earlier death in the observatory building had been recorded as accidental by the coroner, but after the murders it seemed more sinister. (Cluedo fans might wonder: Was it the porter with the iron vice in the observatory?)

Kew Observatory 1841-1980: dedicated to science
The King's Observatory was closed in 1841, but as Kew Observatory, it continued as a scientific enterprise, first under the British Association for the Advancement of Science and later the Royal Society. It was a solar and terrestrial magnetic observatory and a meteorological station. It also became a noted physical laboratory for testing and certifying instruments such as marine chronometers and from 1910-1980, it housed the Meteorological Office.

I was surprised to find the observatory in the middle of a golf course and assumed it had been a recent development. However the Royal Mid-Surrey Golf Club has been there for over a hundred years. One observatory superintendent put up a fence for protection from golf balls.

1981 onwards
In 1981 the building was available on a lease. To the disappointment of local fans, the pop group Pink Floyd, after consideration, decided against taking it. It was used as a business headquarters for the next thirty years.

In 2014 the Borough of Richmond on Thames gave planning permission for the building to be used as a private residence. The outbuildings previously used for scientific purposes were demolished and the landscaping was constrained by a master plan that linked it to neighboring Kew Gardens and Richmond Park, as well as Syon Park across the river.