Talking drums are hourglass shaped drums with a drum on each end. They are also known as "waisted drums" since the hourglass shape appears to give the drum a "waist". The drums are made from animal hide and have leather cords that run along the body attaching to the animal hide at the other end. The size of talking drums varies greatly from the smallest called a "gan gan" to the largest drum - "dun dun". 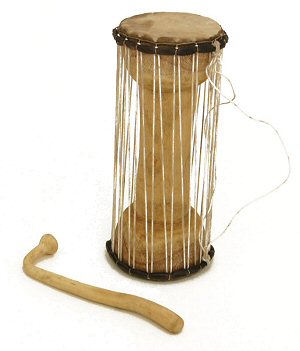 Available for purchase at
AfricaImports.com
The talking drum is held under the left arm and squeezed as the drum is hit with a bent stick. The act of squeezing the drum changes the pitch and gives off various notes. The harder the drum is squeezed the higher pitched the note is. This gives the drum a type of language that can be used to send various messages and meanings to other villages. Certain drum patterns and rhythms are associated with spiritual beings in each tribe.

The talking drum sounds the prayers and blessings of a new day in countless villages across West Africa. The talking drum takes messages miles ahead of its messengers, carrying the messages, greetings, and wishes of its musicians and villages.

Talking drums are one of the oldest instruments used by West African griots and their origins can be traced back to ancient Ghana Empire. These drums spread to Central and South America along with the Caribbean during the slave trade. These drums were once banned from African-Americans because they were being used by the slaves to communicate with other slaves.

You can hear an audio clip of a talking drum at the Instrument Encyclopedia.