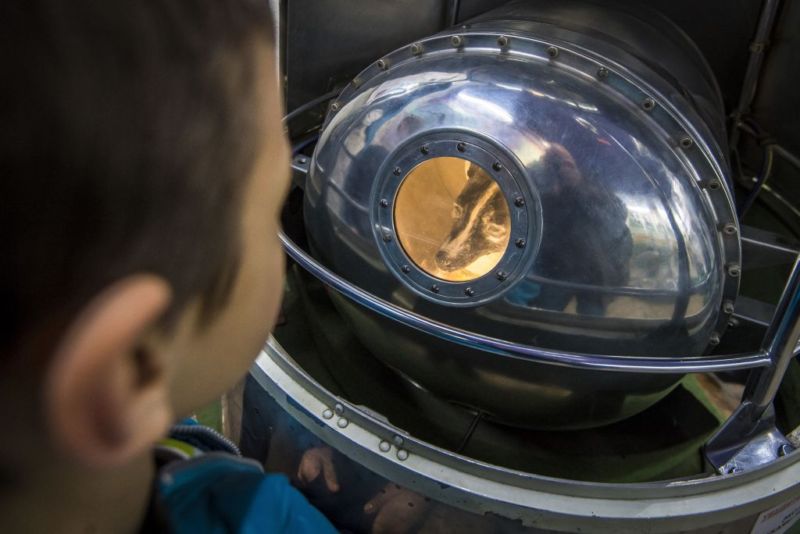 Someone must have left the door open, because the skies are full of dogs. Fortunately, they're kept apart from the cats.

Canine cosmonauts
Yuri Gagarin was the first person to orbit the Earth, but he wasn't the first cosmonaut. That was Laika, a Moscow mutt, who went into space on Sputnik 2 in 1957. Laika was much loved by schoolchildren, and there were tears around the world when she didn't survive the mission.

Only after the fall of the Soviet Union did documents make it clear that there were never any plans to retrieve Laika, and no way of putting her to sleep to end the mission painlessly. In fact, she wasn't in orbit for long, but died of overheating several hours after the successful launch.

A launch failure took the lives of two further canine cosmonauts, but the rest came home safely. Most notable was Strelka who later produced a healthy litter — one of the puppies, Pushinska, was given to the American president John F. Kennedy. Although Soviet-American relations remained strained in the 1960s, relations between Pushinska and the other Kennedy family dog Charlie were good enough to produce a litter of puppies which Kennedy dubbed pupniks.

Fortunately for the dogs, with humans really keen to get into space, they were able to stay on the ground.

A nebular dog
Nebulae are great clouds of gas and dust. Most of them are just numbers in a catalog, but many have also been given nicknames because their shapes remind people of something. In the constellation Cassiopeia there is a nebula about 200 light years across which is sometimes called the Running Dog Nebula. Can you see the running dog in it?

Thousands of years ago, Lupus was known to the Babylonians as a wolf or wild dog. In classical times it was an unspecified wild animal that was a hunting trophy or perhaps a sacrifice for the altar (the constellation Ara). During the Renaissance period it became known as a wolf.

Vulpecula however is not a classical constellation. It's one of those invented in the seventeenth century by Polish astronomer Johannes Hevelius. It's located in the middle of the Summer Triangle, and in common with Hevelius's other constellations, it is dim. This makes sense, because all the bright stars would have been incorporated into constellations long before Hevelius's time.

The region of Vulpecula was big news in 1968 when Jocelyn Bell and Antony Hewish discovered the first pulsar there. Pulsars were a mystery then, but we now know that they are a particular type of neutron star. A neutron star is the remains of of a massive star that has run out of fuel, exploded and its core collapsed. Until the first pulsars were discovered, neutron stars were just far-out theoretical ideas.

Canis Major is dominated by Sirius the “dog star”. For the ancient Greeks, the “dog days” of summer were the hottest part of the summer. They began around the time that Sirius first rose in the morning sky after being behind the Sun for a few months. The star is so bright that they thought it contributed to the heat of mid-summer. Although Sirius is about 25 times more luminous than the Sun and is fairly close, it isn't close enough for us to feel its heat.

Canis Minor is Orion's other dog, a small constellation whose main point of interest is its brightest star Procyon. Both Procyon and Sirius are double stars. And in each case the companion is a white dwarf. A white dwarf is the compact remnant of a medium-sized star that has run out of fuel and collapsed. That will be the fate of the Sun one day.

Canes Venatici is another of the constellations of Hevelius. He envisioned it as two dogs for Böotes, who is holding them on a leash as he hunts the Great Bear (Ursa Major). Two of the stars were bright enough to be listed by Ptolemy in the second century, but he didn't associate either of them with any constellation.

Celestial feeding time?
What might we use to feed the celestial dogs? Perhaps asteroid 216 Kleopatra which appears to be a giant dog bone.


You Should Also Read:
Cats in the Sky
Cosmonauts - Birth of the Space Age
Canis Major - The Greater Dog