An average Kenyan household generally eats ugali na sukuma wiki for dinner. Ugali is a stiff porridge made out of maize meal (white corn meal). Ugali is eaten with sukuma wiki and does not require any silverware. You simply use the ugali to pick up the sukuma wiki and then put it in your mouth to eat it. 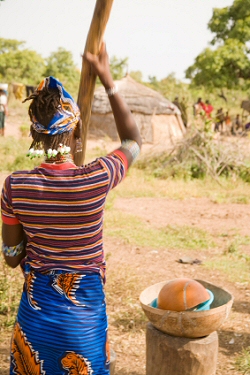 This is a very stiff maize meal porridge. Actually, it's about the consistency of play dough.

1. Bring water to a boil in a pot.
2. Add the maize meal and stir to prevent lumps.
3. Add more maize meal to make a thick porridge.
4. Keep stirring until the maize meal is well cooked.
5. Tip out onto a plate - the ugali should hold its shape.

*Traditionally white corn meal is used for ugali, but you can also use yellow corn meal.
*You can add a little bit of butter or margarine to the porridge before it thickens for more flavor.


There are recipes similar to ugali all over Africa. Fufu is the most well known of these recipes and is eaten in Central and Western Africa. Fufu is made with white or yellow yams (not the sweet potatoes that we have in the U.S.)

Banku and Kenkey are two more Western African foods similar to ugali and both are made with maize meal although banku is sometimes made with a combination of maize meal and ground cassava. Unlike ugali, the maize meal is allowed to ferment before banku or kenkey is cooked. Banku is cooked in a pot like ugali. Kenkey is partially cooked, then wraped in banana or corn husks and then steamed.

Similar to Kenkey is Bâton de Manioc which is made entirely of cassava and steamed.

Nshima (also known as Nsima, Shima, Sima) is Zambia's version of ugali and can be made with maize meal, ground millet, ground sorghum, or ground cassava.

Sadza of Zimbabwe, made with maize meal, is essentially the same recipe as ugali.

In Burkina Faso and Mali, Tô (also called Toh rhyming with 'dough') is traditionally made with sorghum flour, but can be made with maize meal or rice flour.