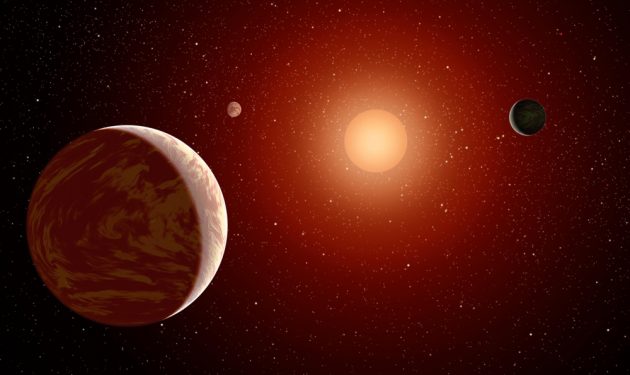 Looking up at a clear, dark sky, you can see thousands of stars. Yet to the unaided eye the most common type of star is invisible. These are the small, cool red dwarfs that live practically forever. Even though about 75% of the stars around us are red dwarfs, nobody had ever seen one until the invention of the telescope.

But what are red dwarfs, and do they really live forever?

How does a red dwarf compare to the Sun?
We know the Sun better than any other star, so let's use it as a starting point.

The Sun's energy comes from hydrogen burning in its core. Hydrogen burning isn't like burning wood, which is a chemical reaction. Stars are giant nuclear reactors, and the Sun produces energy by converting hydrogen to helium in nuclear fusion. A red dwarf does the same.

Classified as a yellow dwarf, the Sun is bigger than the red dwarfs. The largest red dwarf has no more than half the mass of the Sun, and the smallest ones have less than ten percent of the Sun's mass. Yellow stars are also hotter than red stars. While the Sun has a surface temperature of 6000°C, red dwarfs average about half that, 2500-3500°C.

How long does a star live?
The key to the lifespan of a hydrogen-burning star is its mass.

It might seem that the bigger the star, the more fuel it would have, and therefore the longer its lifetime would be. But it doesn't work that way. The temperature of a star with forty times the mass of the Sun is 30,000°C, and it lives a million years. Although that's a very long time to us, it's a very short time for a star. The Sun is halfway through a lifetime of around ten billion years – a thousand times longer than the massive star.

A massive star burns much brighter than the Sun, and small stars are dimmer. The red dwarfs burn more slowly and more efficiently, so their fuel lasts longer. A red dwarf could live for trillions of years.

When Sun-like stars run out of hydrogen fuel, they first expand into red giants, then finally end their lives as white dwarfs. We know of many white dwarfs. Once the nuclear reactions stop, the only heat produced is by gravitational collapse. After that they slowly cool. When a massive star runs out of fuel, its end is signaled by a supernova explosion, leaving behind either a neutron star or black hole. There are also many examples of both of these objects.

Theory predicts that instead of swelling into red giants, aging red dwarfs heat up and become blue dwarfs. But there are no examples of such a remnant. This isn't surprising. As the Universe is less than fourteen billion years old, all the red dwarfs should still be shining.

Red Dwarfs and planets
Considering that a red dwarf lives so long, if it had suitable planets, there could be a long time for life to evolve. But that would depend on whether red dwarfs do have planets and if so, what the conditions are like for them.

The first requirement is met. Astronomers have discovered planets around a number of red dwarfs. They seem to be quite common. Since we're also interested in finding rocky planets, it's promising that there seems to be a substantial population of low-mass planets.

The first thing that astronomers look for, in terms of conditions, is whether or not the planet is in its star's habitable zone. That's the area around the star in which the temperature is neither too hot nor too cold for water to exist as a liquid. This diagram shows how the location of the habitable zone depends on the star's temperature.

The habitable zone of a red dwarf is close to the star. Unfortunately, any planet this close to would also be tidally locked to the star. Therefore scientists assumed that it would be hostile to life. When a planet is tidally locked, it keeps the same face to the star throughout its orbit, as, for example, the Moon does to Earth. A day would be the same length as a year on such a planet. The star-facing side would be extremely hot, and on the opposite side the atmosphere would freeze up.

However an increased understanding of planetary science has re-opened the discussion about life on a red dwarf planet. There are models of of atmospheric circulation that suggest the conditions mightn't be as extreme as they'd once thought. Therefore there is considerable interest in the potential of red dwarf planets.

Kapteyn b
In June 2014 the discovery of two planets orbiting Kapteyn's Star was announced. The star is a red dwarf discovered by Dutch astronomer Jacobus Kapteyn in the nineteenth century. It's located in the southern hemisphere constellation of Pictor, one of the constellations devised by Abbé Lacaille.

There is evidence that both planets, known as Kapteyn b and Kapteyn c, could be super-Earths. A super-Earth is a planet several times more massive than Earth, but still a rocky planet. There was some excitement about Kapteyn b being in the star's habitable zone.

Back to our original questions
What are red dwarfs, and do they really live forever?

Red dwarfs are small, comparatively cool stars using hydrogen for fuel. The nearest star to the Solar System, Proxima Centauri, is a red dwarf, as are most of the other stars close to us. They are by far the most common stars in the Milky Way. It's an exaggeration to say they live forever, but because they are such effective nuclear reactors, the lifetime of a red dwarf may extend to trillions of years.