Quaoar – What Is It 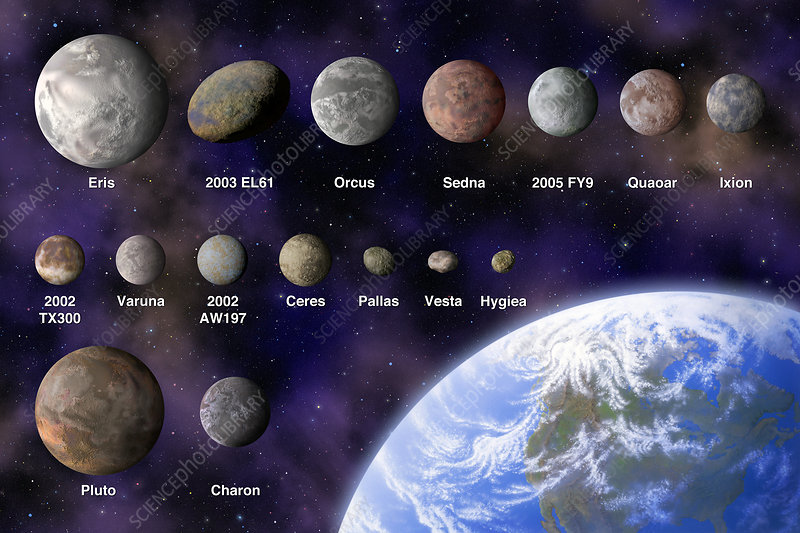 Beyond Neptune lie the tens of thousands of icy bodies of the Kuiper Belt. If it sounds as though things must be crowded out there, keep in mind that the belt is several billion miles wide. And most of these trans-Neptunian objects (TNOs) are very small, though some are large enough to be dwarf planets. One of them is Quaoar [pronounced KWA.ore], but it's not listed as a dwarf planet. So what is it?

Quaoar is a cubewano!
We now know that Pluto is one of many bodies beyond Neptune, but even when Pluto's moon Charon was discovered in 1978, the Kuiper Belt was a concept without tangible evidence. The breakthrough came in 1992 with the discovery of a new trans-Neptunian object. The Minor Planet Center of the International Astronomical Union (IAU) designated it (15760) 1992 QB1. When similar objects were found later, they were grouped as classical Kuiper Belt objects. However from the QB1 part of the designation, they also got the nickname cubewanos [cue.bee.WAN.oze].

Cubewanos are located between 40-50 AU, and have fairly round orbits. (The astronomical unit (AU) equals the Earth-Sun distance.) Unlike Pluto, they don't cross Neptune's orbit and aren't influenced by Neptune's gravity. Quaoar's orbit takes it between 42-45 AU from the Sun, which is much rounder than Pluto's orbit which varies from 30-49 AU.

A classical Kuiper Belt object can also be a dwarf planet. The largest known cubewano is dwarf planet Makemake [MA.kay.MA.kay].

The creator and his son
Michael Brown and Chad Trujillo, discoverers of a number of TNOs, discovered Quaoar in 2002 while observing at Palomar Observatory in southern California.

The IAU convention for naming classical Kuiper Belt objects requires them to relate to creation myths. Quaoar is the creator deity of the Tongva people, the original inhabitants of the Los Angeles basin. Since the object was discovered at Palomar Observatory, this seemed appropriate. Five years after finding Quaoar, Michael Brown detected a moon. Following consultation with the Tongva community, the moon was named Weywot [way.wot] after Quaoar's son.

Discovering a moon is not just interesting, but also useful to astronomers. It's somewhere between difficult and impossible to get the mass of an isolated object. However you can get a good value for a planet's mass from a moon's orbit, and Quaoar's mass was 1.6x1020 kg.

Quaoar is red and maybe volcanic
The spectrum of Quaoar shows that it's red and covered in a layer of water ice with small quantities (about 5%) of frozen methane and ethane. The red color, as on Pluto, is probably due to the presence of tholins. These are red-colored chains of hydrocarbons produced in chemical reactions powered by ultraviolet radiation from the Sun.

There are also signs of crystalline ice. It forms when from water ice is vaporized and then refrozen. This indicates that there has been some recent resurfacing on Quaoar – recent in astronomical time, meaning in the last ten million years or so.

The most likely explanation for the resurfacing is cryovolcanism, heat probably having been supplied by radioactive elements decaying in the core. Instead of shooting out molten rock, a cryovolcano releases mostly water or other liquid. For example, when the Cassini spacecraft flew through a cryovolcanic plume on Saturn's moon Enceladus, it found mostly water vapor, but with small amounts of nitrogen, methane and carbon dioxide.

Quaoar the dwarf planet?
The IAU created the category of dwarf planet in 2006 and controversially, named Pluto, Eris, Ceres, Makemake and Haumea as dwarf planets. Of the four listed characteristics of a dwarf planet, Quaoar certainly meets two of them, namely it orbits a star and it isn’t the satellite of another body.

But it also needs to be massive enough for its own gravity to pull it into a rounded shape. There's no minimum mass specified in the IAU's definition. However a draft proposal stated that an object with a mass of 5x1020 kg and a diameter of 800 km (500 miles) would probably be a spheroid.

The latest value for Quaoar's diameter is based on 2013 combined data from the Herschel Space Observatory and the Spitzer Space Telescope. That gives a figure of 1070±38 km (770±24 miles). Along with its mass of 1.6x1020 kg, Quaoar seems to pass that test. The existence of surface methane is also supportive evidence, because only the larger Kuiper Belt objects have been able to retain it.

The final feature is merely what distinguishes a dwarf planet from a planet. A planet has enough mass to “[clear] the neighborhood around its orbit” and a dwarf planet doesn't.

Uruguayan astronomer Gonzalo Tancredi presented to a 2010 symposium of the International Astronomical Union a detailed paper examining nearly four dozen icy dwarf planet candidates. One of those which met the criteria for being a dwarf planet was Quaoar.

Why isn't Quaoar a dwarf planet?
I don't know the answer to this question. It looks to me like institutional inertia, but perhaps somewhere in the IAU there is someone working on extending the list of dwarf planets.

You Should Also Read:
Kuiper Belt
Pluto Is a Dwarf Planet
Volcanos – Fire and Ice