Zelda Twilight Princess has been eagerly awaited by legions of Zelda gaming fans. This version features a more adult Link who rides a horse, swings a sword and saves the day. 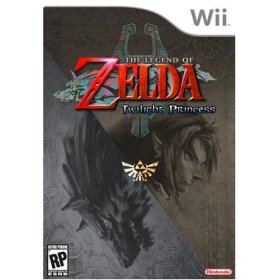 The title is available for both the GameCube and the Wii, and there are definitely some advantages with the Wii. First, you can see the game in 480p, which is DVD quality. It's not quite high definition, but it's still quite nice! Second, you get widescreen, which means you get much more game to see on the screen. Finally, you get to use the motion sensing controllers on your Wii to swing your sword, go fishing, aim your slingshot, and much more.

First, the gameplay. Most gamers will be thrilled to hear that Link is less cartooney in this game. That's not to say it's a mature title - it's still a game without blood. You kill evil enemies who vanish in a puff of smoke. You go on a variety of quests, and it's very much good-against-evil. Rather, with this Link you're not a little 6 year old on a toy sailboat. Your Link is in his late teens, has his own house, owns a horse. He is harassed by three little tykes, but there's a certain young lady whose large eyes catch at Link's heart.

In no time at all Link is out in a world which is not all butterflies and daffodils. There are dark things afoot in Hyrle. The land is covered in twilight, and you turn into a wolf to deal with the shadows. Your senses serve you well in this realm. It's not too scary for kids - but it gives the game much more depth for older players.

The graphics are rather impressive for a Link game. Remember, the game is still a cartoon, so you're not seeing detailed tanks or the pores in the characters faces. The world you are in is stylized. There is plenty of detail in 480p - or even in regular TV resolution - to show the orange pumpkins, green vines, and fluffy white chickens which make up Hyrule. The water ripples, the dust billows and the fire flickers in the fireplace.

How about the sound? The Link games were famous (or notorious) for the silly noises characters make. None talk. I suppose this makes it easy for them to convert the game to every language in the world - they just change the text out and are all set. Also, you can change your name and your horse's name without any speaking issues. The voices might not know how to pronounce "Shadowfax".

Gameplay is just amazing in its length and depth. There are numerous worlds to traverse and dungeons to delve into. There are the standard collection of mini-games, quests, things to collect, puzzles to solve. You could easily play this for months and not be done. This isn't a game to race through to say "I solved it" and move on to something else. It's a world to immerse yourself in, to get to know every hill and dale, to track down those secret locations.

I really like how the Wii controllers integrate into the game. It's not like you are using them constantly, getting exhausted with hand movements. Instead, you do a fair portion with the regular joysticks for fine movement. The joysticks are used in a more general way, for sweeping sword attacks or relaxing fishing. You can use small movements if you want - but it's much more fun if you get into the spirit of things and swing away. Just make sure you have that wrist strap properly connected!

Downsides? The little "he he he" voices can get annoying quickly, especially if you are stuck on a puzzle and they are tormenting you. Sometimes the checkpoints send you back further than you might like.

They do a good job of giving you little nudges if you get stuck, helping you figure out your way through the puzzles.

In general, I think they struck a great balance between "tame enough for younger kids" and "in depth enough for older players". There are a lot of teen and adult Zelda fans out there, and they'll be quite pleased with what the game offers. This is definitely one of those must-have for gamers who like adventure games even the slightest!