Of the five games in the Nintendo Wii sports package, boxing is probably the most mature. Sure, there's no blood, but you're doing two fisted attacks directly on your opponent's head. 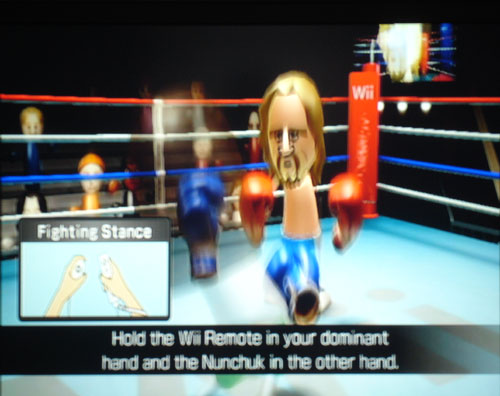 There are only three rounds involved in this. For each round, you jab with both hands. This is the only game in the sports set that use the nunchucks. There aren't any buttons at all involved. You hold the remote in one hand, the nunchuck in the other. You move your hands forward to hit. You raise them in front of you to block. You move them to the side to dodge.

The bell rings, and the fight begins. Your person has no arms for some reason - just a body, gloves and a head. You throw punches left and right at your opponent's head and body. A ring shows the remaining health. If you get your opponent down to zero, they are knocked down - but they're likely to get back up again. It'll take several knockdowns to get them to stay down for good.

There are a few people in the audience, but not many. They do cheer wildly, though.

Where the other sports games here are team or skill based, this one deliberately has you hurting another person. It bothered me that a game that had kids as a main audience involved boxing as one of the five main sports. I realize that many adults play the Wii games - but I would have thought it better if games like boxing were kept as separate purchases.