In martial arts, nunchucks are a pair of short wood rods connected with a chain that ninjas whirl around their bodies :) With the Wii, the nunchuck is a single controller held in your off hand. 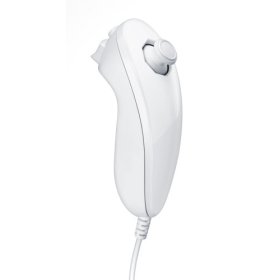 The nunchuck is not the main controller unit for the Wii. The Wii primarily uses the Wii Remote, shaped like a TV remote, for its functionality. The Nunchuck is for use in the "other hand" (i.e. your left hand if you're right handed) just for a few games. It plus into the bottom end of the Wii Remote with a cable that's about 2 1/2 feet long. Most of the time, you leave it unplugged and sitting by the console.

For example, in the sports pack that comes with the Wii, only one of the five games uses the nunchuck. This is the boxing game. You use the nunchuck to hit with your off hand, just as you use the Wii remote to punch and jab with your primary hand.

The nunchuck has the same motion sensing technology as the Wii remote does, so that you can move your hand around and the game knows what you are doing. The buttons are much simpler - there is a Z big trigger button, a smaller C trigger button above it, and then a joystick up on top. For some games, no buttons are used at all.

The nunchuck doesn't need its own power - it plugs into the Wii remote controller when it's in use. So there's no worry about charging up or batteries.

I would definitely have at least one functional nunchuck for my Wii, and if you're really into multiplayer two-handed games like boxing matches, then having two would be important. However, for most gamers, one will probably suffice!

Buy the Wii Nunchuck from Amazon.com