Intriguingly, Super Swing Golf Wii is an example of an online, free multi-player game porting to a console and becoming a single player sports game. Known either as Albatross 18 or Pangya in its online world, the Super Swing Golf version for the Wii is strictly off-line. 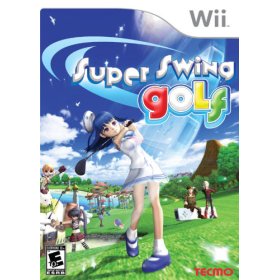 In this Wii variation, there is a little bit of plot, but it really doesn't matter. You're on the fictional island of Pangya and there are evil forces at work. Really, this game is just about choosing a character, choosing a caddy,and playing golf.

There are a variety of courses to play on - you start with a few options, and more become available as you go. There are cool variations - snowy courses with icy lakes, desert courses where you hit through pyramid areas, rainy courses, cloudy courses, fairy tale courses. You can play tournament style and match play. There is a training mode to help you get started.

As you play well, you earn Pangya Points, which you then spend in the store. You can buy yourself new outfits, clubs, items and more. Each gives you some sort of benefit - more strength, higher accuracy, and so on. Some are special one-time-use items that let you calm down the wind, see visually how your putt will work, and other neat features.

The graphics are reasonably nice - it's obviously cartooney, but you see what you need to in order to play. The greens are shown with a grid full of dots, with the dots representing the slope of each specific grid. It works, although it's not as helpful as other golf games in determining slope. The camera views - showing overhead and target views of your shots - are OK, but again, other games provide much more complete fly-overs and detailed layouts of the hole you're playing.

From a golf point of view, the game isn't very accurate, either. When you swing, you literally bring your Wii remote up and then stop, waiting until you get to the right spot on the swing-o-meter. You press the button and then swing down through to hit the shot. It's very unnatural. The swing should be all one fluid motion and the game should know when you reach the top of your swing by itself.

Also, the pars set for some of the courses are nonsensical. A par should always assume you need two putts to sink the ball into the hole. The game doesn't do that - some pars seem almost randomly assigned.

Still, this game really isn't aimed at real golfers who want to practice their skills. It's aimed at casual players who aren't worried about accuracy - but who want fun watching their balls send out fireworks as they fly. While I don't see why a game can't be fun *and* accurate, I accept that game developers make odd decisions sometimes when making their games. For example, why do they have numerous "concept art" unlockables of barely teen girls in bikinis? How does this relate to golf? The mind boggles.

Fun enough to play with up to four players in your home, or single player, but do remember that this doesn't go online - and that it's not going to be as good as other golf games if you're looking for a realistic golfing experience. Well recommended for casual fun sports play.