Women portrayed in the horror genre

A great example of a female villain and victim in a horror movie is Regain in ‘The Exorcist.’ ‘The Exorcist’ tells the story of a young girl, Regan, who becomes possessed by the devil and must be exorcised by a priest in order to save her soul and her life. The movie plays on Regan’s womanhood, since Regan is possessed just before reaching puberty and she is transformed by the demon just as she would be by womanhood. However Regan’s change is a drastic opposite: through demonic possession, she becomes more masculine, with a deep voice, aggressive speech, and great physical strength. Regan’s body becomes perverted and taken over by the male demon. Her femininity is stolen and her innocence corrupted, this provides the horror for most of the movie. Some men fear the power of females, especially when females act in stereotypical masculine ways, so Regan as a woman is then portrayed as disgusting, dirty, and strange (she is cussing like a mad woman and projectile vomiting, but let’s overlook that for a moment.)

The movie insinuates that because there is no male influence this has happened to her, because Regan’s father has left her. Regan can also only be saved by another male, the priest. Regan’s saviour, Father Damian Karras, has himself lost religion and only through Regan can he regain his faith. He uses Regan’s horrific situation to bring him strength. Even the demon oppressing Regan is male, so she is truly being pushed from all sides by male influences, whether good or bad. Her life and her fate lie in the hands of men and she has no control over her own destiny. This could signify the desire of the male sex for control over women, because of fear that women will gain power in society. Regan is such a compelling character because of her original innocence and femininity, but it was her eventual masculinity that created the horror of the movie.

In some movies, horror has taken a better turn toward equality for women as heroines. The women of modern horror can take care of themselves and do not rely on males for help. They utilize their femininity in order to defeat male villains and their strength frightens men because they hold the power in these films. An earlier example of the strong woman in horror occurs in the classic slasher film, ‘A Nightmare on Elm Street.’ 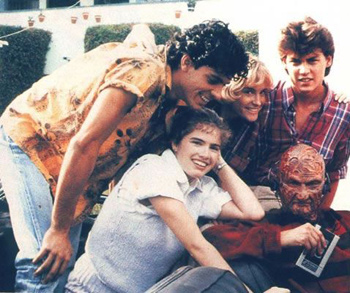 In the movie, child murderer Freddy Krueger (Robert Englund) stalks teenagers in their nightmares for revenge after being burned alive by their parents. The film’s heroine, Nancy (Heather Langenkamp), is the only one to figure out Freddy’s method and motives, and therefore is the only one to survive. As a character, Nancy is interesting because she could have become just like any other disposable girl in a slasher film, but she rises above the stereotype and becomes a heroine, showing courage in the face of evil. Nancy counters Freddy’s masculinity by using her own intelligence and strength against him, showing him her power and control as a woman is just as valuable. In one scene, when Kruger enters her house, Nancy dares him to come at her, and then charges him in direct attack. Nancy is a girl who is not afraid to fight for her life and believing in her own strength saves her in the end from Freddy. At the beginning of the film, she seems like any other girl in a slasher movie, but by the end she has accepted her role and uses her feminine strength against the villain.

One scene in the film shows Nancy taking a bath in order to rest from her stressful day and she falls asleep in the tub. The audience does not realize she is dreaming until a clawed hand rises between her open legs in the bathtub. The symbolism of Freddy’s intentions in this scene is obvious: as a male, he feels he may dominate Nancy and take advantage of her sexuality. Nancy is completely exposed, vulnerable, and powerless. However, Freddy underestimates Nancy’s power as a woman, a mistake that many other men in modern horror films make, and it becomes his downfall. Nancy uses his own power against him, representing the ability of the female to use the male killers’ belief in his own masculinity against him, he believes that because he is male and Nancy female, she will fear him, but he is wrong and she uses it against him. Freddy, as a male, fears Nancy’s ability to remain feminine and challenge him in combat and mind. Nancy uses Kruger’s sexual repression and deviance against him. This is a common theme in horror films that portray women as heroines and a well made horror will portray the strength and equality of the female sex.

Nancy Thompson doesn’t need to become masculine, as Sarah Conner (Linda Hamilton) does in ‘Terminator 2: Judgement Day’, and she doesn’t need to be androgynous, as Ellen Ripley (Sigourney Weaver) is in the entire ‘Alien’ movie franchise. In fact, Ripley becomes more and more masculine as the films’ progress. By ‘Alien Resurrection’ she shows many attributes of a male, including superior strength, muscular body, and losing any femininity the character once owned in the first two films. If Ripley has to become androgynous, or masculine to survive – that is not really a powerful woman, because the role could have easily have been played by a man. A true powerful female hero should be able to keep her femininity and defeat the villain.