The Luba tribe currently resides in the Katanga, Kasai, and Maniema regions of the Democratic Republic of the Congo. The Luba speak Tshiluba, their tribal language, along with Swahili.

The Luba first appeared in what is now southeastern Democratic Republic of Congo around 5 A.D. The Luba were able to organize themselves and construct irrigation ditches, dikes and dams throughout the Upemba Depression marshes. This cooperation allowed them to also stock fish in the dammed areas for the dry season.

The Luba tended to cluster in small villages. They built rectangular homes facing a single street. Agriculture was based upon slash and burn cultivation usually by rivers. The Luba supplemented their agriculture by hunting and fishing in the surrounding area.

Luba sculpture included iconic representations of women which correlates to the important role of women in Luba culture. According the Luba mythology, Vilya, the first female spirit, was the founder of the Luba. She was also the spirit which guaranteed fertility and continued the lineage. 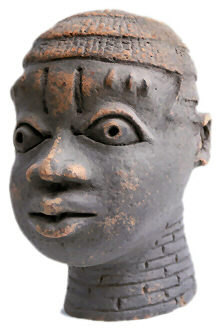 Luba Woman Sculpture
By 600 A.D. the Luba were working in iron and trading in salt, palm oil, and dried fish. These products were traded for copper, charcoal, glass beads, iron and cowrie shells from the Indian Ocean.

Around 1500 A.D. the various Luba clans united to form one cohesive unit. They organized under one king called "mulopwe". The king was chosen from a group who were able communicate with the world of man and the world of spirits and ancestors. This group was called "balopwe". The king or mulopwe had significant powers. He headed up the governors and under-governors which ran down to local village chiefs. The king collected a tax or "tribute" from local chiefs. This was distributed in the form of gifts to loyal followers.

The mulopwe had significant spiritual prestige. He was the head of the Bambudye (or Mbudye) secret society. All kings, chiefs and officials belonged to Bambudye. This society, which included both men and women, helped keep the vast tribe together. Bambudye were "Men of Memory" who preserved the tribe's oral tradition.

The Bambudye had a mnemonic device to help them remember the complex history and ritual life of the Luba. It was memory board called the lukasa. The lukasa had colored beads and shells set into a carved wooden board. The lukasa provided a spatial representation used to help the interpreters remember Luba culture and history.

An important part of Luba culture was divination (kibuta) by the Bilumba. The Bilumbu were spirit mediums who would enter a trance gazing into sacred baskets or gourds (mboko) containing ritual objects. The will of the spirits would be read by the Bilumbu through the position the objects took in the bowl.

The Luba began trading with the Portuguese around 1700. They acquired manioc and maize which allowed the Luba to increase in population quickly. The Luba traded arrow poisons, drums, animal hides, ivory and dried fish for cattle, cotton, beads, iron, tools and implements. A type of currency consisting of Cross-shaped copper ingots and raffia cloth were used along with bartering.

Around 1800, the Luba went into decline due to infighting over succession for kings and various economic changes including the declining need for slaves. In 1885, Belgium took control of the area now known as Democratic Republic of Congo where the Luba resided.