African countries have gone through many changes in recent history. This includes their flags. The current flags have elements that represent concepts and ideas important to that country. Each flag is unique in its own way. Below are the flags for the African countries beginning with the letter C. 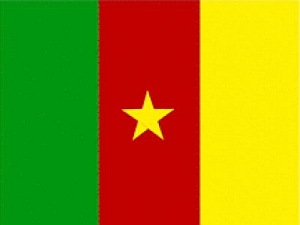 The current flag of Cameroon was adopted on May 20, 1975. The flag has three vertical stripes one each of green, red and yellow. There is a five-pointed star in the center of the red stripe. The size of the central star tends to vary but it is always centered inside the center red stripe. The red represents unity. The yellow represents the sun and savannahs in northern Cameroon. The green represents the forests in southern Cameroon. the star in the center of the flag is known as "the star of unity". 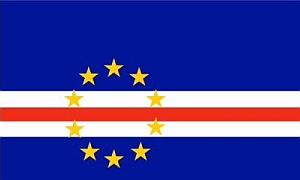 The current flag of Cape Verde was adopted on September 22, 1992.

The 10 stars on the flag represent the main islands of Cape Verde. The blue represents the ocean and sky. The white and red bands together represent the road toward the construction of the nation. Individually, the color white stands for peace and the color red stands for effort. The color yellow, circular formation of the stars, and dark blue field are reminiscent of the flag of the European Union. The stripes are in a 6:1:1:1:3 ratio from to top bottom. 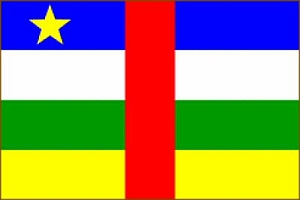 The current flag of the Central African Republic was adopted on December 1, 1958. The flag has four equal horizontal bands of blue, white, green, and yellow with a vertical red band in center. There is a yellow five-pointed star on the hoist side of the blue band representing aspiration towards a vibrant future. The color red represents the blood spilled in the struggle for independence. The color blue represents the sky and freedom. The color white represents peace and dignity. The color green represents hope and faith. The color yellow represents tolerance. 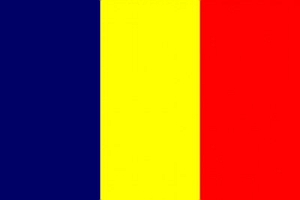 Chad's current flag was adopted on June 11, 1959. The flag has three vertical bands - blue, yellow and red. The blue symbolizes the sky, hope, and water. The yellow represents the sun and the desert in northern Chad. The red represents progress, unity and sacrifice as well as the blood shed for independence. 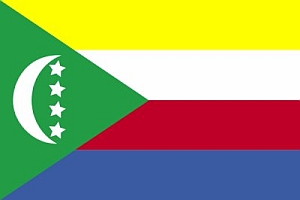 The current flag of the Union of the Comoros was adopted on January 7, 2002. The flag of Comoros has four stripes each representing the four islands of Comoros. The yellow stripe is for Mohéli. The white stripe is for Mayotte. The red stripe is for Anjouan. The blue stripe is for Grande Comore. There is a green isosceles triangle on the hoist side of the flag with a white crescent with four white stars inside. The star and crescent symbol stands for Islam, which is the nation's major religion. 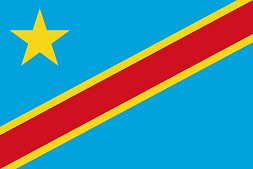 Congo, Democratic Republic of the

The current flag of the Democratic Republic of the Congo was adopted on February 20, 2006. The flag is a sky blue field divided diagonally by a red stripe bordered by two narrow yellow stripes. There is a yellow five-pointed star appears in the upper hoist corner. The sky blue represents peace and hope. The red represents the blood of the country's martyrs. The yellow represents the country's wealth and prosperity. The star symbolizes unity and the brilliant future for the country. 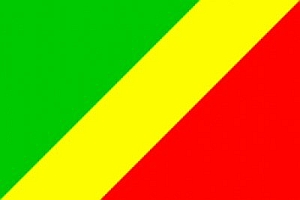 Congo, Republic of the

The flag of the Republic of the Congo was originally adopted on August 18, 1958. A new flag was adopted in 1970 at the beginning of the socialist period of the "People's Republic of Congo". On June 10, 1991 the original flag was readopted.

The flag of the Republic of the Congo is divided diagonally by a yellow band. The upper triangle on the hoist side is green and the lower triangle is red. Green symbolizes agriculture and forests. The yellow symbolizes the friendship and nobility of the people. The meaning of the red is not known but has been associated with the struggle for independence.